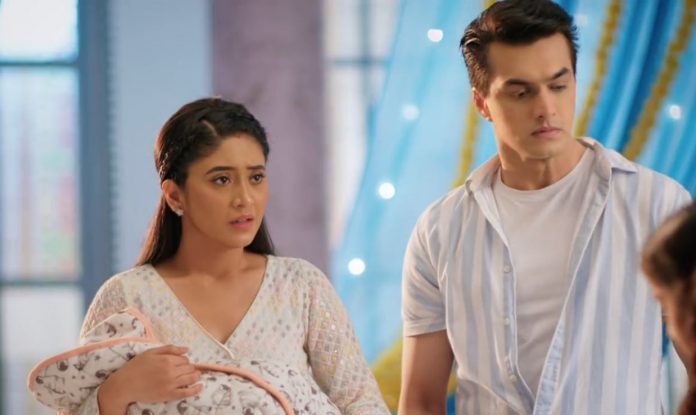 Yeh Rishta 27th October 2020 Written Update Kairav’s shocker Manish knows that Krishna will not clear the test. Kartik and Naira go to know the results. Krishna is worried by the negativity around. Kartik returns to the family. He tells Krishna that her admission didn’t happen. Manish and the kids are happy since they didn’t wish the admission to happen. Kairav feels sorry.

He finds his parents worried. Krishna gets dejected. She sheds tears in sorrow. She tells Kairav that she forgot everything which Kartik and Naira taught her all the night. She tells that she will sell clips on the road all life. The kids find her sad. Kartik and Naira applaud her. They give the good news that her admission has happened after a review of the interview answers. Krishna is delighted to know this news.

Kartik tells her that she has cleared the interview. Kairav is glad to see them happy. Krish tells Vansh that they have failed. Kairav thinks they got punished for the wrong thing. Kartik asks the kids to congratulate Krishna. Krishna thanks her brothers. Meanwhile, Dadi informs the family about the festive coming.

The family is just excited for Akshara. Krishna gives the good news to the family about her admission. Manish and Dadi don’t care. Gayu tells that its her baby’s first festive also. Kairav explains Krish about the Dussehra and Raavan Dahan. Kairav tells about Ram and his brothers, who conquered over Raavan. He impresses everyone by showing his knowledge. Krish wants Kirti to tell him stories too. Dadi asks Kirti to understand her duties when she has to raise her son alone. Kartik and Naira plan to keep Ram leela for the kids.

The kids get excited. Naira gets a new hope that Naksh and Kirti’s relation will get fine. Dadi and Manish get glad to see the passing time. They have a wish that Kairav will become Ram. They tell Kairav that he will become Ram in Ramleela, but Vansh also wants to become Ram. Vansh and Kairav get into an argument. Gayu feels the partiality towards her son. She realizes that no one values Vansh and Vatsal.

She exclaims that the family just values Kartik and Naira’s children. Naira tries hard to explain Kirti about giving a chance to Naksh. Kirti tells that the relation slipped out of hands. Naira reminds her of Naksh again. Kirti avoids the talk. Naira wants to know if Kirti has feelings for Naksh or not. She asks Kirti to arrange Krish’s uniform. Gayu meets Naira to discuss about Vansh. She tells that Vansh is always ignored, since the family always gets partial towards her son. She expresses her feelings.

Moreover, Manish is raged when he receives a custody notice from Naksh. He tells Kartik that he will defeat Naksh, he will never let Naksh win. Naksh wants to get her son back. He doesn’t want to give any time to Goenkas. Kartik consoles Manish. Naksh wants Krish to return home before he goes too far. Kartik wants Manish to think of Kirti. Manish wants Naksh to beg to them for forgiveness, only then Kirti and Krish may return to Naksh. He doesn’t understand anything in anger.

Kartik takes the responsibility to save Kirti’s marriage. He wants to invite Naksh for Ram Leela and unite him with Kirti. He calls up Naksh for the sake of Krish. He tells that Krish is innocent in his parents’ fight. He asks Naksh to be there for Krish’s motivation. He doesn’t want Naksh to lose the chance. He tells that once his son’s childhood gets missed, he will always regret. Naksh gets emotional.

He decides to meet Krish and watch his performance in Ram Leela. Naira finds a solution to decide who will play Ram. She feels this is a fair way to decide. She asks the kids not to have any cheating or partiality. Dadi tells that Kairav will play Ram. Kartik and Naira want the kids to choose their roles. The kids get their roles written on the chits. Krishna gets Hanuman’s role. Vansh gets the role of Sita. Krish tells that he got Ram’s role. Kairav gets Raavan’s role and refuses. Kartik and Naira encourage him to play Raavan. Kairav doesn’t get his wish fulfilled. He wants to become Ram as per the legacy. He gets too upset with them.

Reviewed Rating for this particular episode Yeh Rishta 27th October 2020 Written Update Kairav’s shocker: 5/5
This rating is solely based on the opinion of the writer. You may post your own take on the show in the comment section below.