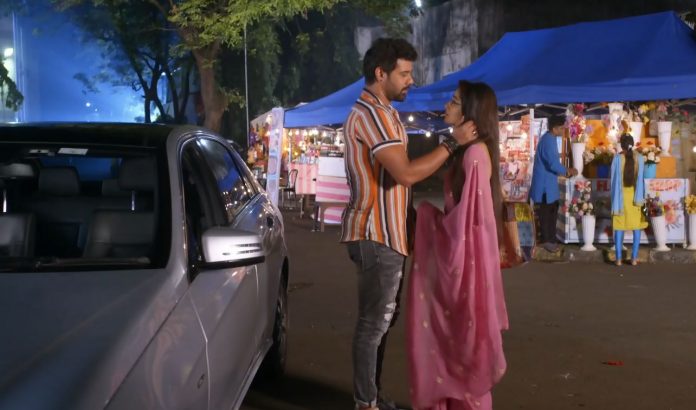 Kumkum Bhagya 31st October 2020 Written Update Abhi saves Pragya Aaliya wants to stop Pragya from coming home by using Rhea. She wants to fill her ears against Pragya. She calls up Aryan to know about Rhea. He tells her that Ranbir is with Rhea. He calls Ranbir to get updates about Rhea. Ranbir tells him that Rhea is fine and sleeping right now. He tells that Pragya had come to meet Rhea. Aryan tells everything to Aaliya.

Aaliya doesn’t want Pragya to unite with Rhea. On the other hand, Abhi calls Prachi as his daughter. He cries emotionally. Prachi tells him that she wants to go and find her mom. She knows that he is very hurt. She doesn’t want to hurt her more. She thanks him for the lift. She feels that Abhi wants to tell her something. She knows he is the world’s best dad. She wanted him to be her dad. Prachi falls down while walking on the road.

Abhi takes care of Prachi. He does the aid to her wound. She realizes that Pragya also used to panic the same way when she fell down. She tells him that she used to see her dad in him, but never wanted to snatch him from Rhea. She tells that he has unintentionally hurt her a lot. Abhi tells her that he was wrong before. He is sure that her dad would be proud of her.

He tells that he is proud of her. He feels sorry to hurt her feelings. He asks her to take care of herself. Abhi and Prachi go their ways. She goes to find Pragya. He also wants to meet Pragya. Aaliya finds Pragya outside the hospital premises. Prachi gets to see Pragya. She wants to know the matter. Aaliya can’t see Pragya winning. She wants to stop Pragya and her daughter from meeting. She doesn’t want Abhi to see his old Pragya again.

Abhi wants Pragya to be with him. She wants to commit Pragya’s accident, just like Prachi’s accident. She hopes that no one sees her. She drives the car angrily to knock down Pragya. Prachi sees the speeding car moving towards Pragya. She wants to save her mother. She shouts to Pragya to alert her. Abhi gets alert by hearing Prachi’s screams. He realizes that Pragya is in danger, because of the speeding car.

Aaliya races towards Pragya, while Prachi runs to save Pragya. Abhi tries to save Pragya in time. Pragya sees Prachi running towards her and realizes that something is wrong. Abhi brings his car in front of Pragya to save her. Aaliya flees before Abhi sees her. Abhi realizes its Aaliya’s car. Abhi gets bit hurt in his attempt to save Pragya. Prachi is thankful to him for saving Pragya. Pragya tells Abhi that she wants him fine. He tells her that he would have died if anything happened to her. They get into a moment, while Prachi goes to get water.

Moreover, Ranbir meets Rhea and asks her to take care. Rhea asks him if he will hate her. She can’t see his hatred. He takes back his words. He didn’t know she will commit suicide. She tells him that she wants to be friendly with him. She asks him to never go away from her. Ranbir tells Rhea that they will be always friends, but he wants her help. Rhea tells that she will give her life for him. He just wants her to not come between Prachi and him. He asks her to clarify to his parents that they don’t love each other.

She feels sorry. She tells that she will talk to his family once they go home. She doesn’t want to stay at the hospital. She asks him to take her home. He goes to talk about discharge papers. She always wants him with her. She doesn’t want him to go away. Ranbir wants her to understand that he can’t live without Prachi. Aaliya reaches home. She is afraid that Abhi has seen her committing the accident. She thinks she has invited problems.

She doesn’t want to admit that she has tried to kill Pragya. She decides to make changes to her car so that Abhi doesn’t doubt her. Pragya tells Abhi that she had come to meet Rhea. Abhi tells that they should tell their children about them. He wants to drop them home. Pragya wants to take a cab. Prachi asks Pragya to accept his help. Prachi sees them behaving weird and thinks the reason. She thinks Pragya wanted to scold him, but looks much calm.

Aaliya wants her car dents to get clear before Abhi comes. She hires a mechanic to fix her car. She feels she is safe, and even Pragya’s fate was good today. Abhi feels Prachi is also like him, since she is his daughter. Pragya knows that Abhi would be seeing himself in Prachi. She thinks Prachi is like her. He wants Pragya to tell the truth. Pragya isn’t ready to tell the truth, since Prachi doesn’t seem ready for it.

Reviewed Rating for this particular episode Kumkum Bhagya 31st October 2020 Written Update Abhi saves Pragya:5/5
This rating is solely based on the opinion of the writer. You may post your own take on the show in the comment section below.