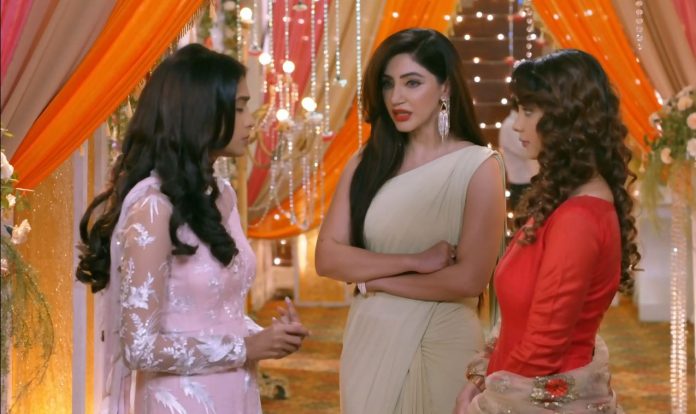 Kumkum Bhagya 5th November 2020 Written Update Prachi is shocked Pallavi plans a surprise for Ranbir and Rhea. She gets upset seeing Prachi. Prachi gets a rude welcome and asks Pallavi if she made any mistake. Vikram tells Prachi that its not her fault, its actually their mistake. Ranbir loves Prachi a lot. He wants to meet Prachi and get her hand for marriage.

He feels he has got Prachi on the festive. He wishes himself. Pallavi insults Prachi and calls her equal to the maid. Ranbir wants to support Prachi. Dida tells Prachi that the dreams break and hurt heart. She taunts that Prachi would be heartbroken now that all of her dreams broke. Ranbir is sure that his family will always keep his wish. Prachi asks the reason for the call. Pallavi asks Prachi to do her work for which she is called home.

Prachi misses Pallavi’s affection. She knows that they used to love her before. She wants to know the reason for their change. She wants to ask Ranbir if anything changed. She thinks of keeping Ranbir away from the matters. Prachi cleans Ranbir’s room. Ranbir asks Prachi not to do any work. Prachi feels he has no idea about his family’s wish. Prachi tells that she isn’t ashamed to do any work. Ranbir gets ready in Ram leela skit costume.

Prachi learns that he is playing Ram. She laughs seeing his funny look. Ranbir likes her smile. He compliments her. They get into a moment. Pallavi calls Prachi for work. Ranbir wants to know why is Pallavi shouting such. He wants Prachi to answer him. He wants to marry Ram and get her home. He tells that he doesn’t have to fight any Raavan to get his Sita. Prachi likes to hear good things from him. Pallavi is enraged to see Prachi with Ranbir.

Dida tells that Ranbir is getting drawn towards Prachi. Pallavi feels Prachi is trapping Ranbi

r. Dida misunderstands Prachi’s greed. Pallavi wants to warn Prachi to stay away from Ranbir, since he will be marrying Rhea. Prachi doesn’t want Pallavi to be upset. She comes across Rhea and enquires about her health. Rhea wants to love her sister, but hates her since she has snatched Pragya and Abhi from her. Prachi apologizes to Rhea.

Aaliya doesn’t want them to bond. She finds Rhea getting emotional. She stops Rhea from speaking up. Aaliya warns Prachi to stay away from Rhea. She cries and hugs Rhea. She asks Rhea not to accept Prachi as her sister. She tells that she loves Rhea a lot. She asks Rhea not to get any emotions for Prachi. She brainwashes Rhea against Prachi.

Reviewed Rating for this particular episode Kumkum Bhagya 5th November 2020 Written Update Prachi is shocked:2/5
This rating is solely based on the opinion of the writer. You may post your own take on the show in the comment section below.