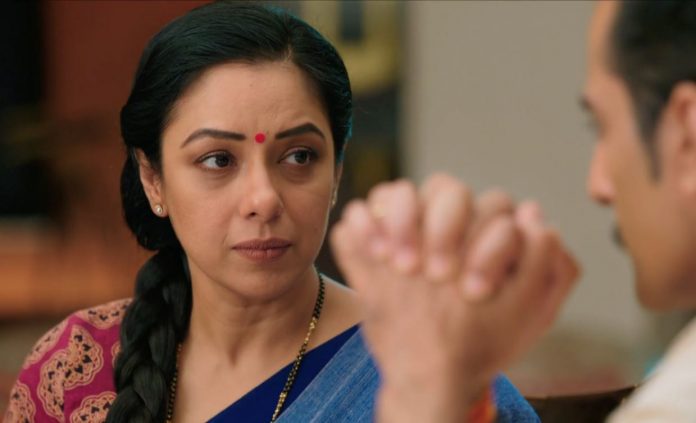 Anupama 5th November 2020 Written Update Vanraj challenged Anupama keeps a note for Vanraj instead the food. She writes to him that she wanted to show love for him by petty gestures, she has always done his work for his happiness, but now he is out of her heart. She adds that she doesn’t love him now, she will not listen to him from now. She wants to serve him food if she wants. She asks him to eat Kavya’s favorite pasta if he is feeling hungry. He angrily tears the note. He thinks Anupama is showing her worth.

Anupama has always cooked food for him, taking it as her duty. She doesn’t want any duty to burden her from Vanraj’s side. Samar bribes Bapu ji. They call Anupama and plan to cheer her. Anupama asks Samar who has given the cream roll to Bapu ji. She takes care of Bapu ji’s sugar level. Bapu ji asks her to agree to take up the dance class. Kinjal comes home and learns the matter. She also joins Samar. She wants Anupama to agree for the dance classes.

The family wants Anupama to get independent. Baa tells that Anupama’s job isn’t necessary. She tells Kinjal that they aren’t rich, Anupama has to work in kitchen and take care of the family’s needs. She tells that they don’t have servants in the house like Kinjal has. She asks Kinjal not to spoil Anupama. Kinjal goes to assist Anupama in the kitchen work. She wants to explain Anupama that she has to move on to get over the life’s crisis. She tells that she is always with her. Paritosh overhears them. He gets upset with Kinjal.

He tells that Anupama is happy in her life since the last 25 years, she doesn’t need to do any job. He asks Kinjal not to interfere between Vanraj and Anupama’s relation. Kinjal tells him that Anupama should be engaged to have a good mental state, she shouldn’t sink in depression over Vanraj’s cheat, her job will bring her out of the crisis. Paritosh tells that Anupama tried to work before, but failed, since she couldn’t manage job and family together. He believes that Vanraj will sort out the differences with Anupama.

He asks Kinjal not to brainwash Anupama, who has been a housewife till now. He gets into an argument with Kinjal. Kinjal wants him to understand the situation and support his mother. She thinks he is supporting just his father. Anupama finds Vanraj frustrated. He confronts her for not sending the food in tiffin. Anupama asks him if he didn’t read the note. She asks him not to question her work. She tells that she never asked him about his work even when he is with Kavya. She taunts him about Kavya.

He tells that Kavya ordered the food for him. She tells that she won’t prepare tiffin for him from now. He asks her to stop the drama for once. She reminds him that he has been doing a drama of loving her since years. She doesn’t want him to get tired of her drama so soon. Vanraj feels she has got a tongue to answer. He tries to break her courage. He tells her that he is going to marry Kavya. She congratulates him. She asks him if he is going to marry before Paritosh, or on the same wedding day. She taunts him on his failing marriage.

She advises him to keep his second marriage and not indulge in any other affair. She doesn’t think Kavya will have patience like her. Vanraj reminds her that she is still his wife. He scares her of his parents. She asks him to think of his misdeeds. She tells that his parents won’t support him if they know his misdeeds. Anupama isn’t affected by any of his words. She goes to serve dinner to the family. Samar knows that she has always kept herself behind for Vanraj’s sake. He asks her not to wait until Vanraj finishes the food.

He wants Anupama to join the family. Bapu ji also wants Anupama to change herself. Baa doesn’t like it. She asks Bapu ji what’s the need to change Anupama. He tells Baa that they should change themselves. He makes Anupama sit and serves food to her. He tells that he is Anupama’s father, he can serve the food to his daughter. Baa angrily wants them to serve Vanraj. Anupama asks Vanraj to help himself. She passes the spoon to him. Baa asks her to respect Vanraj and serve the food. Anupama handles the situation well.

She tells that Vanraj had enough food in the office and may skip the meals now. She tells that she doesn’t know how much he wants to eat. She asks Vanraj to serve himself. Bapu ji agrees with her. Anupama decides to take the dance classes. She wants to get independent. Baa opposes her, but the entire family supports her. Anupama wants to answer Vanraj’s challenge. Vanraj hates Anupama’s dance. He throws away the ghungroo. He tells her that she will just dance on his fingers. He degrades her once again.

Reviewed Rating for this particular episode Anupama 5th November 2020 Written Update Vanraj challenged: 4/5
This rating is solely based on the opinion of the writer. You may post your own take on the show in the comment section below.