Anupama 6th November 2020 Written Update Vanraj to marry Kavya Samar makes arrangements for the dance classes. He wants Anupama to begin her dance classes with enthusiasm and confidence. He gifts her ghungroos. He tells her that dance is fun when there is the sound of ghungroos. Anupama tells him that she used to dance a lot in her house, her dad had gifted her the ghungroos to support her. Her dad believed that dance is an art and not everyone is blessed with such skills. She feels she got her dad’s blessings back.

Meanwhile, Vanraj looks for the socks. He is getting ready for his important meeting. Kavya calls him up to inform him about the meeting. Anupama dances in the room. Samar records her video to upload on the dance classes. Kavya asks Vanraj to come on time. Vanraj tells Kavya that Anupama isn’t doing his work now, she is intentionally troubling him. He finally finds his socks after throwing out the clothes from the cupboard.

He gets angry hearing the ghungroo sound. He goes to Anupama and stops the music. He wants Samar to get out. Samar ignores him. Vanraj sends him. He reprimands Anupama. He disliked Samar’s dance. He doesn’t want anyone else to dance. Anupama tells him that dance is an art, it is worshipped. She lectures him and wants him to respect the art. He asks her to dance at home, instead taking dance classes. He wants his socks. Anupama gives him the socks.

He throws his ghungroos at the mirror and shocks her. He warns her and tells that she will just dance on his signs. He tells his parents that he has to go to office for urgent work. Bapu ji asks him to take appointment for his routine check up. Baa finds Anupama not looking after Vanraj’s needs. She wants to talk to Anupama. Bapu ji asks Baa to let Anupama and Vanraj handle their issues themselves. Vanraj goes to office without having food.

Samar encourages Anupama. He tells that her ghungroos broke, but not her courage. He tells that she still has her art with her, she has her skills, she will teach the children well. He asks her to take her first class and bond with the students. Anupama gets motivated by him. Samar wants her to be confident.

Anupama is tensed. She shows her dance to the children. The children don’t catch up well. Anupama tells that they will start the dance classes tomorrow. She feels Vanraj is right, she can’t do anything well. Samar asks her not to feel demotivated because of Vanraj.

He tells her that she is an expert in everything. He wants her to practice. He gives her courage to stand for her esteem. Anupama practices dance again. She fixes her ghungroos. She leaves Vanraj frustrated. Vanraj and Kavya discuss about Anupama. Kavya wants to marry him to fix up their lives. Vanraj agrees to divorce Anupama.

Reviewed Rating for this particular episode Anupama 6th November 2020 Written Update Vanraj to marry Kavya: 3/5
This rating is solely based on the opinion of the writer. You may post your own take on the show in the comment section below. 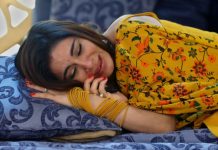