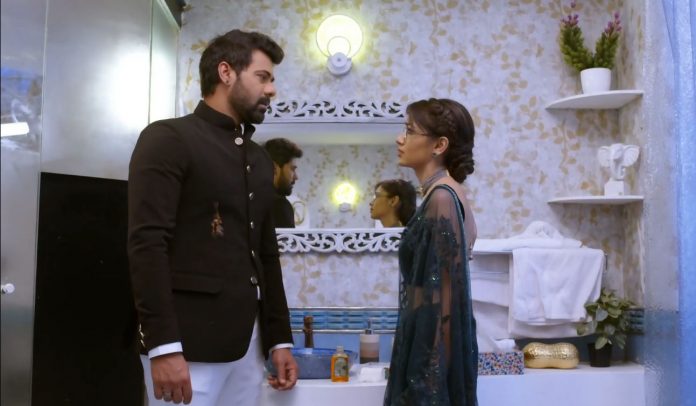 Kumkum Bhagya 9th November 2020 Written Update Abhi wants Pragya’s love Ranbir and Prachi love each other a lot. Rhea can’t tolerate to see them together. Rhea goes away in anger. Ranbir is thankful to a guest who tells him that Prachi’s true love for him is quite evident. Pragya takes care of the staff. Mitali insults Pragya on Aaliya’s orders. She asks Pragya to focus on her staff and make them do the work well.

Pragya feels Mitali is misbehaving with her for a reason. Mitali ends up burning her tongue by the hot spicy snacks. Rhea gets to see Pragya managing the event. Pragya also knows the truth now. She falls weak on seeing Rhea. Rhea wants to get away from her. She hates Pragya now after Aaliya filled the nonsense in her mind. Pragya finds an arrow shot at Rhea from the Ram Leela skit stage by mistake.

She hugs Rhea and protects her. Pragya scolds the man for firing the arrows in such a way. She asks the man not to hurt her daughter. Rhea learns that Pragya was just protecting her. She thanks Pragya and makes a way out of her sight. Rhea feels Pragya would have fought with everyone for her happiness if she had been with her since childhood. Ranbir and Prachi serve the welcome drinks to the guests. Prachi and Ranbir’s growing terms anger Rhea further.

Meanwhile, Aaliya wants to show Pragya her place. She goes to insult Sarita and Pragya by finding flaws in the food. Sarita asks her not to comment on the food. Aaliya creates a scene. Sarita tells her that guests are demanding for more food, which means the food is really tasty. She argues with Aaliya. Aaliya wants her to control her tongue. Sarita tells her that she will leave the work, then Aaliya won’t get any caterer.

She asks Aaliya to apologize to her. Aaliya doesn’t want to say sorry. Sarita makes her apologize. She teaches a lesson to her. Moreover, Aaliya and Pragya get into an argument when they collide and don’t accept their mistakes. She blames him for always misunderstanding her. She tells him that Prachi isn’t ready to hear the truth. She doesn’t want to keep him away from Prachi. Abhi doesn’t want to talk to her. He gets hurt in anger. He tells her that he is totally fine. She can’t leave him seeing him hurt.

She goes after him to take care of his wound. They have a moment. She tells him that he should try to understand her. Abhi tells that she has hurt him a lot. He tells her that she can see his physical wounds, but not the wounds which she has given to his heart. He feels she doesn’t value him, she doesn’t care for his wound. She tells that she is hurt seeing his thinking, he is habitual to hurt her always.

He tells that she always hurts him and then blames him. He gets bitter that she left him and Rhea, and walked out of his life. He complains to her. She doesn’t want to hurt him. He wants her to end the matter and confess love for him. Abhi vents anger on Pragya. He asks her to admit if she loves him else go away from him. Ranbir wants to take Prachi with him to show the ring. Prachi doesn’t want to go with him. Ranbir gets upset with her, thinking she doesn’t trust him. He doesn’t want to take her along. Prachi follows him to make up for her mistake. Ranbir tells Prachi that he wants her time. Ranbir makes her wear the ring with much love, leaving Rhea shocked. Rhea watches them into the moment.

Reviewed Rating for this particular episode Kumkum Bhagya 9th November 2020 Written Update Abhi wants Pragya’s love: 4/5
This rating is solely based on the opinion of the writer. You may post your own take on the show in the comment section below.