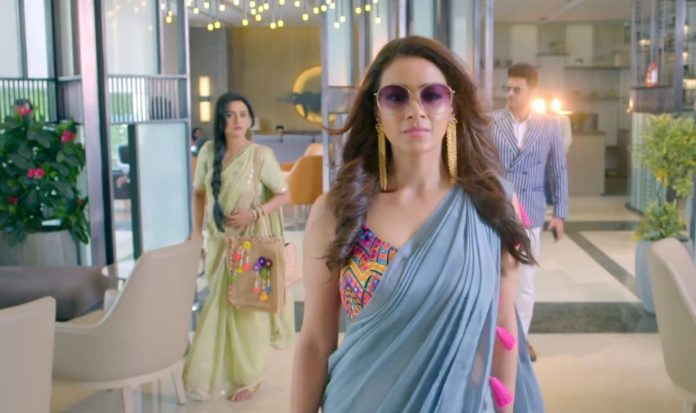 Shaadi Mubarak 16th November 2020 Written Update KT’s ex wife returns KT is heartbroken that Preeti has ended their partnership. Rati speaks to Neelima on call. She tells him that KT got insulted in the village when his marriage truth came out in a bad way. She tells her that Preeti has insulted KT. She makes Neelima against Preeti. Preeti tells Juhi that she will not change her decision. She wants to get separated from KT’s life. Juhi wants her to change the decision. Preeti tells that she will not leave her work, but just KT’s company.

Neelima arrives home to reprimand her for insulting KT. She knew Preeti isn’t a right person. She asks Preeti how dare she hurt KT. She doesn’t want Juhi to speak in between. Neelima knew that Preeti will show her true colours. She rebukes Preeti for using KT for success. She gets threatening to ruin Preeti’s life. Preeti isn’t affected by her words. KT and Preeti meet in the office. They don’t have the friendly terms left between them now.

He doesn’t want to be around Preeti. He is sorrowful that their partnership isn’t the same as before. He didn’t imagine the company without her. He feels they have made all the rules together. He recalls their promises as well. He feels the pain that she isn’t the same Preeti now. She tells KT that its their last project together. He asks her how did she decide it alone. She tells him that he had lied to her, he didn’t use any chance to tell the truth.

He asks her to know the reason for hiding the truth. He reminds that she also lied to him before. He asks her to understand him and the reason that he had hidden the truth. He tells that she is making an excuse. They meet their new client. A gorgeous lady waits for them at the hotel. She turns out to be KT’s ex wife. KT and Preeti don’t happen to see her. KT’s wife wants to meet him soon. KT isn’t ready for the shocking sight. KT gets a huge surprise when he meets his son. He isn’t aware of his son’s identity. His son wants to tell him the truth later.

He calls him Papa with love. KT bonds with his son. His son wants to unite his parents. He asks KT to forgive his wife. He plans the marriage of KT and his wife. He asks KT to forgive the person who is repenting for the mistake. KT tells him that strong relations shouldn’t break because of anyone’s one mistake. He feels one should always make a new start. He tells him that he wants to get his mum and dad married, by making them have a second chance in life. Preeti asks him about his parents. KT’s son doesn’t reveal his truth. He tells that he will soon introduce his mum. He asks KT to take the signing amount since they are doing business. KT picks his wallet. He gets close to soon to know about his son. A very interesting drama is going to come. Keep reading.

Reviewed Rating for this particular episode Shaadi Mubarak 16th November 2020 Written Update KT’s ex returns: 3/5
This rating is solely based on the opinion of the writer. You may post your own take on the show in the comment section below.