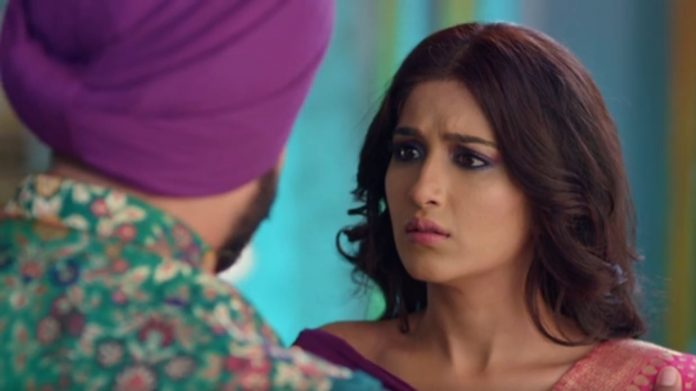 Choti Sardarni 19th November 2020 Written Update Sarabjeet’s vow Aditi comes home crying, which makes everyone worry for her. Meher, Harleen and Sarabjeet ask her the reason for her tears. They want to know if Vikram has hurt her or said something wrong. Aditi tells that Vikram wants to divorce her because he loves someone else. She shows the dupatta that belongs to Meher. Meher worries that its her dupatta.

Sarabjeet knows that it belongs to Meher. Even Harleen knows this. Harleen tells that the dupatta belongs to Meher. Sarabjeet and Meher worry that Aditi will know the truth of Meher and Manav’s past. Meher wants to tell Aditi the truth. Sarabjeet tells that Meher has a similar dupatta. Aditi wants to find out the girl who has snatched Vikram from her. The family consoles her. Aditi tells that Vikram can’t divorce her, she can’t live without her. She believes that Vikram loves her. Robby happens to know the new drama.

He cries for his sister. He asks her not to think again about harming herself. He doesn’t want her to get depressed. He promises to fix her marriage by talking to Vikram. Aditi tells that she wants to meet Vikram’s lover and ask for her Vikram back. Sarabjeet assures that he will sort out everything. Aditi trust him a lot. He wants her to stay strong.

Seema is worried for Aditi. She calls Aditi and takes her welfare. She wants Aditi to have food on time. Aditi doesn’t tell her the truth. Harleen asks her to tell the problem to Seema. Aditi tells that she can’t tell everything to Seema, who is a heart patient. She can’t give any shock to Seema. She wants to find Vikram’s lover so that she exposes her truth. She gets revengeful. Sarabjeet finds Meher blaming herself. He asks her how did Vikram get the dupatta. Meher knows that Manav had taken it from her room. She tells Sarabjeet that its easy for Manav to get the dupatta when he had kidnapped Karan.

She tells him that Manav got the same dupatta to Serbia when he met her. He tells her that their intentions are right, everything will get fine in their lives. He is positive about it. She tells that she doesn’t want to hide the truth like a thief. She wants to tell the truth to entire family. He tells that its about Aditi’s life. He wants to handle the matter carefully. He wants to talk to Vikram and reprimand him. He calls up Manav.

Manav asks him if Karan is okay. Sarabjeet tells that Karan has his parents along. He wants to talk about Karan’s custody. He tells that he will find a solution to end the daily tension. He calls Vikram home. Manav agrees to meet them. Param finds Meher crying. He doesn’t want her to cry. Sarabjeet tells that Meher isn’t crying. Param makes Meher smile. Harleen scolds Robby for losing in gambling again and asking her for money. Robby lies to her that he has no loan on his head this time. He has joined hands with Pathak.

He has to gather Sarabjeet’s secrets and pass to Pathak. Pathak promises to give him 50 lakhs. Robby wants to find the secret that will ruin Sarabjeet’s family. Meanwhile, Kulwant dons a cool avatar of a young girl to disguise herself and follow Amrita. She wants to know who is Amrita going to meet. Vikram arrives to meet Sarabjeet and Meher. He rushes to see his son Karan first. He likes Sarabjeet’s maturity to settle the matter out of court. Param hinders Manav. Sarabjeet reprimands Vikram for hurting Aditi.

Param tells Manav that he is playing with Karan. He tells that Karan isn’t of Vikram. Sarabjeet asks Param to take Karan with him. Manav likes Sarabjeet’s strategy to make Param say their decision. Meher tells that they don’t use kids for their motives. Sarabjeet confronts Manav about hurting Aditi and sending her away from him. Manav didn’t know that Aditi learnt about the divorce decision and left house. Sarabjeet is thankful that Vikram gave him blood and saved his life. He doesn’t want Vikram to ruin Aditi’s future. He tells that his decision has changed after seeing Aditi in tears. Manav ends his relation with Aditi. Aditi is shocked to hear this. Manav faces Aditi. Aditi commits suicide in front of Manav. Her move shocks everyone.

Reviewed Rating for this particular episode Choti Sardarni 19th November 2020 Written Update Sarabjeet’s vow: 5/5 This rating is solely based on the opinion of the writer. You may post your own take on the show in the comment section below.