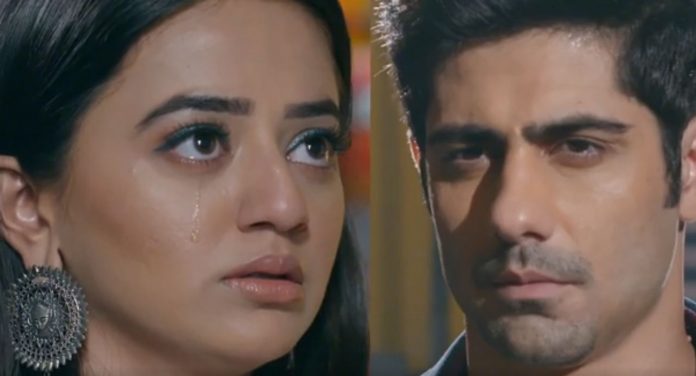 Ishq Mein Marjawan 20th November 2020 Written Update Riddhima tracks Vihaan Riddhima learns Kabir’s plan to replace Vansh in the family. She is much shocked that Kabir is constantly threatening to harm the family. He makes it clear what he wants from the family. He tells that he wants to own and run Vansh’s business. He asks Riddhima to just serve his goal once again by talking to Dadi about his wish. He tells that Dadi believes her, and if she explains Dadi that he can run Vansh’s business well, then Dadi will surely trust her decision.

He tells Riddhima that he wants to take Vansh’s place in everything, be it business or the family. He wants to get his house and also his bedroom. He asks Riddhima to come back to him. Riddhima doesn’t fall in his words. She tracks Vihaan and reaches a mysterious place. She comes face-to-face with Vansh aka Vihaan. She knows that she isn’t in any danger, since Vansh can never harm her, but she is taken aback by the shocking sight that Vansh is alive. She doesn’t know that Vihaan is acting innocent, and sent the hints to her to track him and reach his place. What will happen when Riddhima meets Vihaan, who had already plotted to enter her life? Keep reading.

Reviewed Rating for this particular episode Ishq Mein Marjawan 20th November 2020 Written Update Riddhima tracks Vihaan: 3/5 This rating is solely based on the opinion of the writer. You may post your own take on the show in the comment section below.

Riddhima is lost in Vansh’s memories. He couldn’t see her in pain. Their golden memories flash in her mind and make her restless. She misses him dearly. She wishes he was with her. Kabir reaches to do the aid to her wounds. She is shocked and makes him away. He gets enraged with her rudeness. He threatens her that he will hurt the family. She reprimands him and asks him not to dare hurt anyone. He keeps her conditions and wants her to help him take Vansh’s place. She doesn’t want him to win. She thinks of some way to stop him.

She thinks if she has seen Vansh or anyone else. She wants to find out and confirm if its true. Aryan wants to do business and get money. He wants to trick Dadi and get control in his hands. Kabir wants to command Aryan. Kabir can’t tolerate Aryan crossing limits and misbehaving with him. He angrily hits Aryan and teaches him a lesson. He can’t take any insult from anyone now. Kabir proves that he is the one who would rule on VR mansion. The race for Vansh’s money acquisition begins. Aryan, Kabir and Vihaan chase the money. Riddhima tries to find Vihaan.

Vihaan plants a person near the temple to guide Riddhima to reach her. The man tricks her and takes money from her. She gives her contact number and goes away with a hope to find Vihaan. Vihaan has anger like Vansh. He angrily punishes the man for duping Riddhima for money by breaking his stall. He wants Riddhima to reach him and make him Vansh for the family.

Shockingly, Kabir kidnaps Aryan and tortures her. Aryan wants to know if its some sort of joke. He rebukes Kabir’s actions. Kabir blackmails him. He tells that he knows about Aryan’s illegal business. He reminds that he is a police officer and holds all evidences against him. He threatens Aryan that he will send him to jail or kill him in any encounter. Aryan is scared of him.

Kabir gets mad and tries to get Vansh’s place. Aryan gives up and surrenders. He gets ready to obey Kabir’s instructions. Kabir instructs him to be a good brother from now. Aryan tells him that Dadi will just trust Riddhima and give her rights on the business. Kabir tells that he has planned everything to use Riddhima and win Dadi’s heart. He asks Aryan not to take tension about Riddhima. Kabir and Aryan join hands.

Aryan begins to involve Kabir in the business. He convinces Dadi as well. Riddhima comes home and learns that Kabir has joined the business. Aryan calls him brother, which upsets Ishani. Ishani opposes Aryan’s decision to favor Kabir. She insults Aryan and Kabir as well. She gets too rude and angers Kabir once again. Riddhima finds Kabir taking over the entire business. She thinks just Angre is Vansh’s loyal person who can help her. She meets Angre, who punishes himself for failing to protect Vansh.

He regrets that he wasn’t with Vansh to save his life. Riddhima stops him from hurting himself. Ishani gets into an argument with Riddhima. She lectures Riddhima. Ishani cares for Angre. She asks him to make a plan against Kabir who is trying hard to take Vansh’s place. She pleads him to help Vansh’s soul in getting peace by securing the family. Angre agrees to her. Vihaan waits for Riddhima. She soon reaches the address and finds him. Riddhima meets him and calls him Vansh once again. He begins to act to hide his planning. Riddhima and Kabir get into a moment of rage. He swears to blackmail her for marriage. Will Riddhima marry Kabir? Keep reading.

Shakti:
Heer confronts Virat for supporting her family and going against his own wife. She wants to know the reason that he doesn’t want to complete their wedding rounds. Virat can’t reveal the truth to her that she is a kinner. She forces him to marry her if he loves her. Virat is compelled to marry her and complete the last three rounds by breaking Preeta’s stupid conditions. Heer and Virat take the wedding rounds, which gets shocking and unexpected for Preeto, Harak, Mahi and Rohan. Preeto doesn’t know how will Virat handle Heer when her kinner truth comes out. What will Preeto do after seeing them take rounds? Keep reading.

Aditi learns that Vikram has come to meet her. She rushes to see him and know if Meher and Sarabjeet have ended the divorce matter by finding a solution. She hears Vikram telling his decision that his relation with Aditi is finished. He declares that he will really divorce Aditi. He does this in anger when Meher and Sarabjeet misunderstand him for rushing with the divorce and threatening them further. Manav tells them that he isn’t Aditi’s husband from now. He finds Aditi overhearing his decision. Aditi slits his wrist in anger. Sarabjeet and Meher get worried for Aditi’s life.

Anirudh struggles to get Bondita educated in the school. Principal asks him to get the signatures on her admission form from Mr. John Greenwood. Anirudh and Bondita decide to meet John. They go to meet him at his house party. Anirudh speaks to John about Bondita’s school admission. John asks him to speak to his wife, who will be handling that social affairs. Anirudh is shell shocked to see Saudamini as Mr. John Greenwood’s wife. Saudamini is back for revenge on Anirudh and Bondita. Huge twists are coming.