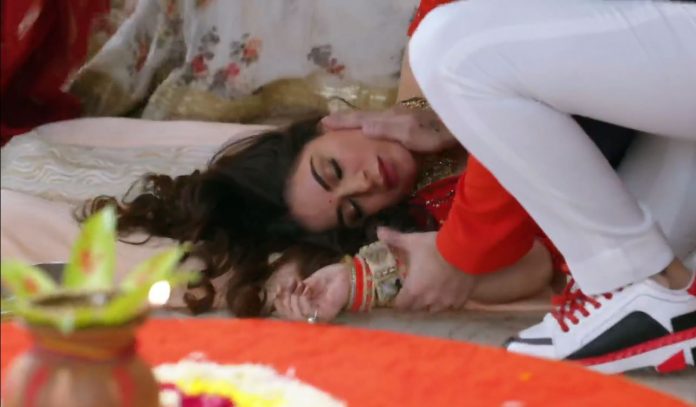 Kundali Bhagya 21st November 2020 Written Update Critical Preeta Karan and Rishabh come for their wives to watch the Karwachauth rituals. Sherlyn doesn’t keep any fast. Preeta faints down after having an argument with Mahira. Sherlyn is also shocked to see her state. Kran and Rishabh get worried for Preeta’s state. Everyone sympathizes with Preeta. Karan takes Preeta to the room. Sherlyn tells Mahira that Ramona had planned to break Preeta’s fast. She tells that now Mahira’s fast will complete.

They had drugged Sarla’s handmade laddoos with the poison. Sherlyn tells Mahira that Ramona is more smarter than her. She is scared that Ramona can get anyone killed. Mahira tells that she is dying every day being away from Karan. She wants Preeta to die and leave from Karan’s life. She knows that Preeta will be going away from them soon. Sarla is sure that Preeta will stay protected from Mahira. She worries for Preeta. Janki and Shrishti pacify her.

They plan to meet Preeta. Preeta gets conscious. Doctor checks her to know why she had fainted. Preeta missed the ritual. Rishabh asks her not to take any tension. Doctor tells Preeta that she had been administered with a poison dose. Karan is concerned for Preeta. Rishabh wants to know the truth. Doctor shocks them by revealing that Preeta was poisoned. The family can’t believe it. Karan asks Preeta why did she tell him that she had a vomit. Doctor sends the blood sample for tests. She tells that Preeta should eat something, else her condition can get worse. Preeta can’t eat anything. She wants to complete her Karwachauth fast.

She refuses to eat anything. Karan gets angered on her. Doctor asks Preeta not to break the fast, but get hospitalized so that she can get treated for the poison spreading in her body. Preeta is adamant that she wants to stay home and complete the rituals. She asks doctor to just treat her at home. Kareena scolds Preeta for proving them wrong in front of Sarla. She doesn’t want Preeta to get trouble for the family. Bani and Rishabh ask Preeta to stay relieved. Doctor wants Preeta to sleep for some time so that she recovers soon. Kareena can’t believe that Preeta is poisoned. She tells Sherlyn what doctor told her. She doesn’t know who can give poison to Preeta. Sherlyn and Mahira try to brainwash her.

She tells Kareena that Mahira is right, if they don’t accept the marriage, then they should forcibly feed food to Preeta, so that she doesn’t act as Karan’s wife. She tells that if its a police case, they will be troubled. She asks Kareena to know that Mahira stood by them and saved them from police. She tells that Sarla will not spare them if anything happens to Preeta. She asks Kareena to feed Preeta. Bani wants the same. She is worried that Sarla will come. Mahira tells that Bani and Kareena are on their side.

Mahira rejoices that she will be celebrating Karwachauth with Karan in a filmi manner. She wants Karan to break her fast. She wants Preeta to get jealous by watching Karan and her in the Karwachauth moment. Doctor asks nurse to get Preeta’s test reports as soon as possible. She updates Karan about Preeta’s condition. Karan stays by Preeta’s side. She is happy to see Preeta. Mahira gets angry to find them together. She asks Preeta to have food and break the fast so that she gets rid of the poison effect.

Karan asks Preeta to have the food. Preeta doesn’t listen to him. Mahira gets a chance to make Karan against Preeta. He knows Preeta’s goodness. He doesn’t want to believe Mahira. Preeta regards the fast auspicious. Mahira tells that she will prove herself as Karan’s wife. She threatens Preeta. Mahira smartly frames Sarla for poisoning the laddoos. She tells that Sarla intended to trouble their family by using Preeta. How will Preeta prove Sarla’s innocence and Mahira’s evil? Keep reading.

Reviewed Rating for this particular episode Kundali Bhagya 21st November 2020 Written Update Critical Preeta: 3/5 This rating is solely based on the opinion of the writer. You may post your own take on the show in the comment section below.