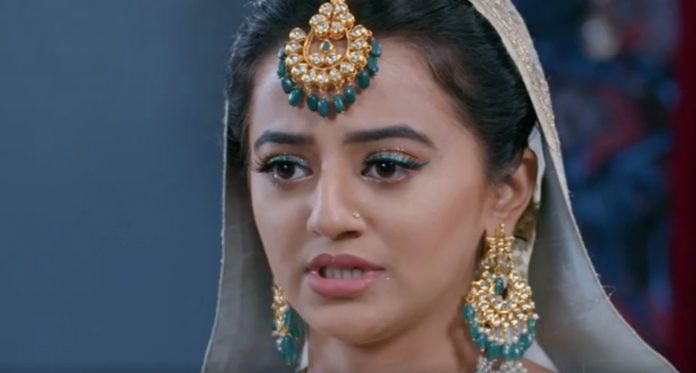 Ishq Mein Marjawan 27th November 2020 Written Update Riddhima awaits Vihaan Riddhima gets scared that its just two hours for the marriage and Vihaan isn’t home. Kabir meets Riddhima to give her the bridal dress. She tells him that she will never wear red colour, which signifies love. She tells that she just loves Vansh and will always love him. Kabir isn’t affected by her hatred. She tells him that she will be wearing a white colour bridal lahenga so that he can also know her feelings that she wants to stay away from him. He asks her to wear anything she likes, but the fact is she will be marrying him.

She has thought of such a big plan that he can’t even guess. She is happy that her plan is on. Kabir suspects that she is getting confidence because of someone. He wants to find out who is behind it. He gets enraged seeing white curtains and flowers decorated. He vents his anger on Aryan. He wants to have red decoration for the marriage. He can’t stand Riddhima’s choice everywhere. He insults Aryan. Ishani asks Aryan to take a stand against Kabir and not let him take Vansh’s place. She tells that Kabir can never take Vansh’s place, since he doesn’t have a brother’s heart towards them. She asks Aryan to compare Kabir and Vansh. She tells that Vansh never insulted them and instead protected them. Aryan knows Kabir is crossing limits. He wants to settle scores with Kabir once he gets the evidences against him.

Riddhima hopes Vihaan comes on the right time before it gets too late. Ishani meets Riddhima to fulfill a ritual. She hurts Riddhima’s hand and then curses her. She rebukes Riddhima for marrying Kabir. Riddhima wants to tell her that she just loves Vansh. Ishani vents her anger on Riddhima. She wishes to punish Riddhima for hurting the family so much. Riddhima calls Vihaan up to know his location. He tells her that he is preparing to come. She asks him if he is still at his place. She tells him that the marriage preparations are done and the passing time is just making her tensed. She reminds him that his entry is much crucial. She can’t accept any delay from him. She tells him that he has to be there on time.

Vihaan asks her not to worry, since he has got the complete payment, he will be there to keep his word. She is suspicious of him. She doesn’t know if he will come or cheat her by running away with the money. She asks him not to break her trust. Vihaan promises to come. Kabir wants to know Riddhima’s plans. He takes some time off from the marriage preparations to check on Vihaan again. He doubts that the orphanage manager he met was someone else. He goes to the same house once to check on Vihaan. Vihaan doesn’t get caught by Kabir.

He makes a leave from his house. Riddhima awaits Vihaan. Anupriya asks Riddhima to leave Vansh’s nuptial chain. She shows the special nuptial chain made by Kabir. Riddhima warns Anupriya against snatching Vansh’s nuptial chain. She waits for a miracle when Vansh returns for the family. Anupriya doesn’t think any miracle will happen in two hours of time. Kabir reaches back home and rushes to get dressed as the groom. He goes to meet Dadi to emotionally hurt her. He demands Vansh’s things so that Dadi gets more heartbroken. He tortures Dadi in a way.

Dadi misses Vansh a lot seeing Kabir taking Vansh’s place. Riddhima finds Dadi hurt and wants to know why is Kabir not keeping his promise. She tells that she is marrying him to save Dadi and Ishani. Kabir tells that he has to become the king of the house and doesn’t care for anyone’s emotions. He makes it clear that he will be taking Vansh’s place by snatching every memory of Vansh. Kabir thinks he is very close to his goal now, he will be taking Vansh’s place by marrying Riddhima. He is just too happy to see his dream getting true. Anupriya wishes him good luck.

She tells that she is waiting to see him as the ruler in the house. Kabir wants the family to obey him. Kabir comes to the mandap as the groom. He recalls that he got to know Riddhima’s plan by visiting Vihaan’s house. The suspense doesn’t come out that Kabir had seen Vihaan or not, did he kidnap Vihaan and dealt with Riddhima’s plans already. The scene will be shown later. Vihaan is smart enough to counter Kabir and fool him again. Definitely, it will be shown that Vihaan has got rid of Kabir once again and came a timely entry to save Riddhima.

Kabir meets Riddhima, who is waiting for Vihaan. He thinks nothing can stop the marriage now. He doesn’t know that Riddhima has planned a huge shock for him. Kabir and Riddhima begin the marriage rituals. Every ritual makes her anxious. She thinks of the dire consequences if Vihaan doesn’t come. Vihaan takes Vansh’s avatar to make a rocking entry in VR mansion. The most awaited scene would be seen.

Reviewed Rating for this particular episode Ishq Mein Marjawan 27th November 2020 Written Update Riddhima awaits Vihaan: 3/5 This rating is solely based on the opinion of the writer. You may post your own take on the show in the comment section below.