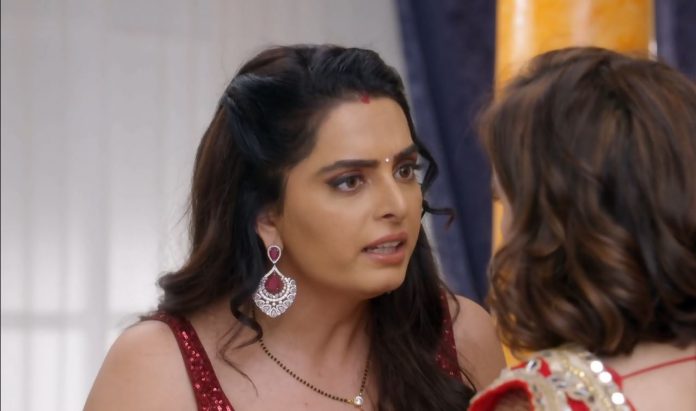 Kundali Bhagya 4th December 2020 Written Update Sherlyn saves Preeta Preeta and Karan have a moment of love since their relation has turned strong after her Karwachauth fast completes. He tells her that he likes it when she keeps a fast for him. He asks her to always keep the fast. Preeta gets happy that she got blessings from Karwa Maa. She thinks Sarla was so right about her. Karan feels love for Preeta, who had tolerated so much pain post the food poisoning and still completed the fast. They have moments of joy together.

He feeds her the food by his hands. She unknowingly bites his finger. He tells her that she has bitten his finger to take revenge, because of Mahira and his closeness. She tells that she didn’t take any revenge. He reminds her that he had done many mistakes in the past which he still remembers. She asks him not to blame her, but she is not planning anything such. She asks him to bite her finger to take revenge. He tells her that he wants to hurt her as she has hurt him. She agrees to bear the pain. He doesn’t bite her finger.

He kisses her hand surprisingly. The couple comes close. He tells her that he loves her and will never hurt her. He makes a promise to her that he will always protect her. Preeta has all the good memories of their love and marriage. She feels the same love in his eyes. She is happy to get accepted by Karan. Mahira vents her anger. Rakhi gets to see her in the kitchen and asks her if she was adding something in the sweets. Mahira tells her that she had come to get water for Bani. Mahira asks Rakhi to take the sweets for Preeta. Rakhi likes her gesture.

She tells Mahira that Karan and Preeta’s relation is proved once again since just a wife can keep the Karwachauth fast for husband. She wants Mahira to accept the fate. Mahira just wants Preeta to die. Sherlyn asks Mahira if she had hidden the poison bottle. Mahira tells that she has already added the poison in the sweetdish so that Preeta dies. Sherlyn wants to fail Mahira’s plan. Karan and Preeta continue to have romantic moments.

Mahira tells Sherlyn that once Karan loses Preeta, he will sink in sorrow and then accept her in life. She tells that she has sent the sweetdish by Rakhi. She is excited to have the good news soon. She tells that Rakhi will be accused for killing Preeta. Rakhi doesn’t let Kritika have the sweetdish, since its for Preeta. Sherlyn doesn’t talk to hear more of Mahira’s plans. He rushes after Rakhi to stop her. Karan takes care of Preeta. They get closer and care for each other. Rakhi reaches Karan and Preeta’s room to give the sweetdish.

She finds them in a close moment. She goes out. She feels she should have knocked and entered the room. She apologizes to Preeta. Karan asks Rakhi to just come in. Sherlyn wants to stop Preeta from eating the sweetdish. Rakhi asks Preeta to have the sweetdish. Sherlyn makes Rakhi drop the sweetdish and acts dizzy. She apologizes to Rakhi. Rakhi forgives her. Mahira doesn’t forgive Sherlyn and gets mad at her, since Sherlyn has intentionally done this. Mahira wants to know why did Sherlyn do this. Rakhi tells Preeta that she will make sweetdish again.

Preeta tells that she will have it later. Karan tells that he had fed Preeta by his hands. Rakhi is happy to see them happy. She asks them to stay happy always. Mahira corners Sherlyn to get her answers. She wanted Preeta to get out of her life. She asks Sherlyn if she is on Preeta’s side that she saved her life. Mahira raises a hand on her. Sherlyn stops Mahira and slaps her back. She tells Mahira that she can’t blame her. She counts Mahira’s mistakes. She asks Mahira not to doubt her loyalty. She threatens to show Mahira her place if the latter crosses limits. She tells that if Preeta had consumed the sweetdish and died, then Karan would have got Mahira jailed.

Reviewed Rating for this particular episode Kundali Bhagya 4th December 2020 Written Update Sherlyn saves Preeta: 3/5 This rating is solely based on the opinion of the writer. You may post your own take on the show in the comment section below.