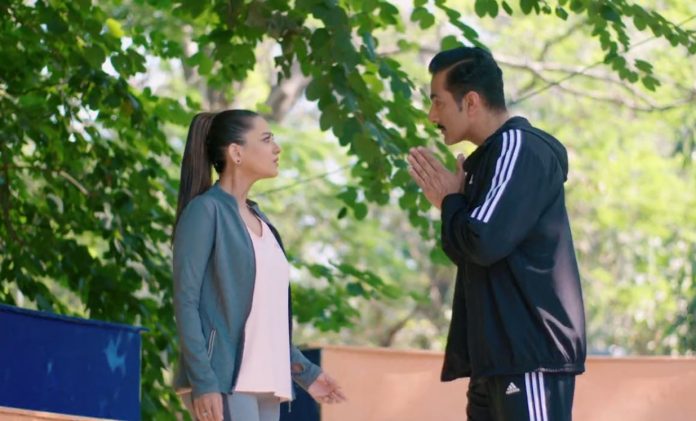 Anupama 5th December 2020 Vanraj Kavya face realities Nandini finds Kavya keeping an eye on Vanraj. She pities Kavya that Vanraj is lying to her for the sake of his family. She asks Kavya if she is feeling bad of Vanraj’s lies. She tries to make Kavya realize where she stands in his life. Vanraj prepares to take a leave from the family. He meets his children before leaving. He faces Anupama. He doesn’t want to let her go easily, after all he feels she has snatched his family.

She tells that a woman never leaves her decency. She wants him not to stoop that he regrets later. She reprimands his wrong actions that he always hurts his family. She asks him to earn the relations by his love. She warns him against his cunning ploy. She hopes he gets some sense. He fails to reply her back and turns angry. He turns up at Kavya’s house with flowers. He lies to her that he went for a client meeting. He finds her ready with dinner.

Kavya tells that she isn’t telling him that he did wrong, but his lie is a big deal. He apologizes to her. She asks him to stop shuffling between two houses. She tells him that his hands are also smelling bad just like Anupama, which he used to hate. She warns him that their relation will break if he visits his house every day. She shows him the mirror of reality. Vanraj gets agitated by her warning.

Meanwhile, Anupama wants to work out the family expenses. Hasmukh asks her to use Paritosh’s calculator. He asks Anupama to not worry, they will manage everything. He doesn’t want her to worry for money, since the family runs by love, not money. He tells that every household faces problems. Anupama wants to take the dance classes and handle the family. Samar meets Anupama. She enquires about his love for Nandini. Samar tries to hide it. She tells him that she knows it already. He pours his heart out about Nandini.

He tells her that he loves Nandini, but she doesn’t love her. He is upset that his first love is incomplete. She tells that even her first love Vanraj was left incomplete. She doesn’t want Samar to suffer like her. Vanraj gets a backache. He wishes Anupama was there to take care of him. He gradually realizes Anupama’s hardwork and dedication towards their relation. He doesn’t find Kavya at home. He gets insecure. He wonders if she has gone to Anirudh. Anupama encourages Samar.

She tells him that Nandini is his friend and he should keep hope that she will accept his love. She regrets that Vanraj and she never had friendship, they never shared their joy and sorrow. She asks Samar to make his friendship strong. Vanraj finds Kavya in a park, talking to some guy. He gets jealous. Anupama finds Nandini at the gate. Nandini isn’t able to answer Samar’s proposal. She wants their awkwardness to end. Anupama tells Samar that he shouldn’t distant himself from a good friend. She plans to visit the same park with Nandini.

Vanraj shocks Kavya by confronting her. She gets embarrassed by his mad behavior. She rebukes Vanraj for insulting her friend. Kavya tells him that its her life, she will decide about it. Their arguments get overheard by Anupama, who is glad that Kavya is showing Vanraj his true place. Later, Pakhi tells Anupama that she wants to enrol for a special course. Anupama finds the fees high. She is worried that she doesn’t have money. Pakhi tells Anupama that she has asked Vanraj for the fees. Vanraj sends the money for Pakhi to slap Anupama’s self-esteem.

Anupama doesn’t want him to use their children in his stupid fight. Kavya learns about the transaction and gets into a new tiff with Vanraj. Will Vanraj realize his true love for the family? Keep reading. Comment your valuable opinion on the show below.

Reviewed Rating for this particular episode Anupama 5th December 2020 Written Update Vanraj faces reality: 4/5 This rating is solely based on the opinion of the writer. You may post your own take on the show in the comment section below.