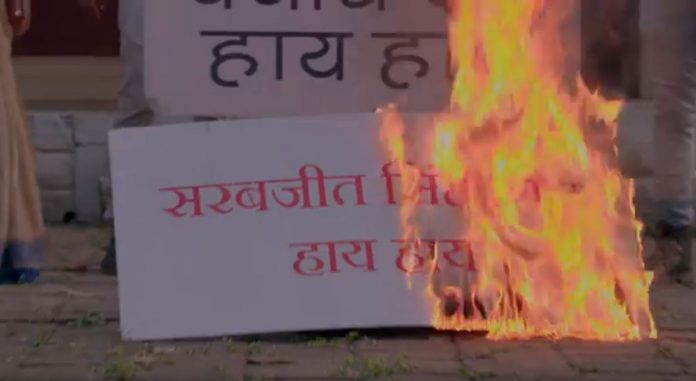 Choti Sardarni 4th December 2020 Written Update Mehrab face fury Sarabjeet makes a major decision to resign from his political party. He leaves his position by making a big declaration in front of the media. He tells that he has decided to quit his political career and leave his party for the sake of his family’s respect. He wants to defend Meher’s dignity. He announces his resignation, which comes as a big shock for Pathak and Kulwant. Pathak is happy that Sarabjeet is out of his way, even if his earlier plan failed.

Kulwant worries that Meher will be losing the rich status. Sarabjeet has resigned as an answer to Meher’s defamation. He protects Meher from all the accusations. Meher doesn’t get saved. The media and the people get against Sarabjeet and Meher. They throw tomatoes at Meher, while Sarabjeet defends Meher. On the other hand, Manav wants to stop Sarabjeet from revealing the entire truth.

Sarabjeet goes on to tell the media that Manav was in love with Manav, who is now Vikram Deewan, a CBI officer. He doesn’t care for the world’s opinion towards Meher’s old life. Sarabjeet doesn’t think that Aditi and Harleen are unaware of the truth and deserved to know it first before he made the public declaration. He doesn’t think of Param, who is part of the press conference as well. There are some flaws in the script, but a lots of drama unfolds with Manav and Aditi reaching home to see the conference live.

Aditi loses her control knowing Meher was the girl who ruined her life by having a love past with Vikram. Aditi threatens to kill Meher. Will Sarabjeet lose his family’s faith and also the people’s support? What will he gain by saying so true to the people of his state when they aren’t able to accept Meher’s truth? What do you think about the twist, did Sarabjeet did right to bring out his wife’s past affair in front of the whole media? The people raise a protest against Sarabjeet. Why? It has to be seen in the forthcoming episode. Keep reading.

Sarabjeet and Meher tell the media about Karan’s father, Manav Sharma. Seema recollects that Vikram had told him about Manav’s child already. She asks Vikram about it. Vikram asks Seema not to tell anything to Aditi. Harleen gets angry. The reporters ask Sarabjeet about Manav. Sarabjeet tells them that he wasn’t sure about Manav’s survival, since he was stabbed to death, but Manav has come back to claim his son’s custody.

He tells that he doesn’t want anyone to take an advantage of the truth. He has told the truth to everyone himself. Harleen tells Aditi that she had explained Sarabjeet many times that he shouldn’t accept someone else’s son. She blames Karan for being the reason of all the problems. Aditi feels proud of Meher and Sarabjeet. She tells that Meher was in love, its not a big crime. She tells that Sarabjeet has taken the right move. Harleen tells her that Sarabjeet has defamed the family, he should have consulted her before revealing the truth.

They don’t want Sarabjeet to resign because of Meher’s past. The people get against Meher and protest against her. Sarabjeet protects Meher from getting hurt by the angry crowd. Kulwant and her sons try to handle the matter. Meher asks Sarabjeet not to resign. She doesn’t want him to put his career at stake. Sarabjeet warns them against hurting his wife. He tells that his family is his world. Meher asks Sarabjeet to stop the argument with the media. Harleen gets upset that the people are protesting against Sarabjeet’s resignation. Harleen is confronted by the party. She is speechless since Sarabjeet didn’t even tell her that he is going to end his career.

The people have mixed opinions about Sarabjeet’s decision. They blame Meher for snatching a noble leader from them. Amrita gets worried for Meher. She doesn’t want Meher to lose Karan. Kulwant is also speechless since the situation is much shocking for her. She vents her anger on her senseless bahus. She tells that her plan to become a party member has got ruined since Sarabjeet has exit the party. Meher is upset that the people are blaming her. Sarabjeet doesn’t want Meher to watch the same news again and again and feel hurt.

He tells Meher that he will not spare Vikram, who is responsible for ruining their peace. Manav tells Aditi that half truth is dangerous. He asks them to know the complete story. He tells them that Manav Sharma wasn’t a wrong person. Aditi scolds him for taking Manav’s side when he should support Sarabjeet. He tells that she should not judge anyone unless she knows the complete truth.

Aditi tells him that if Manav is Karan’s father, then he should have come before to take him. She doesn’t think Manav is a nice person. She tells that Manav would have trapped Meher in love and cheated her. He argues with Aditi to defend Manav. He tells that Manav should get his child. Aditi asks him not to favor Manav and fight with her. She tells that Sarabjeet has lost his political career, peace and happiness because of Manav. Harleen tells that she will not spare Manav if she finds him. Sarabjeet calls Vikram for a meeting. Kulwant thinks her political career will never take a flight now.

Reviewed Rating for this particular episode Choti Sardarni 4th December 2020 Written Update Twists: 3/5 This rating is solely based on the opinion of the writer. You may post your own take on the show in the comment section below.