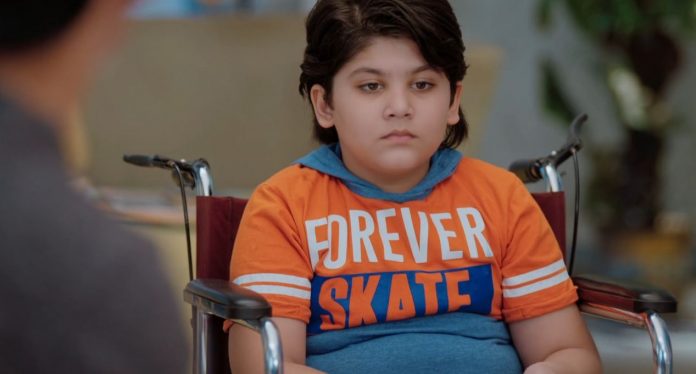 Yeh Rishta Vansh big confession 12th December 2020 Written Update Kartik and Naira have a moment while Kairav is sleeping. She cooks the food for them. She wants to know if Riddhima has a session with Kairav. Kartik tells that there is a session every day, its better that Riddhima shifted to their building. She tells that she found it odd by Riddhima’s coming. He tells that he will tell this to Riddhima if Naira is uncomfortable. He knows that Riddhima is spending time with Kairav, she can still not take Naira’s place.

He tells that Kairav is just Naira’s son. He knows that its tough to tolerate the insecurities, but Riddhima is just doing her work. Naira tells that Riddhima is helping them in a way. Kairav wakes up when Riddhima calls Kartik to invite them for breakfast. Kairav tells that they shall go and have pan cakes at Riddhima’s place. Kartik tells Kairav that Aai has made food for them already. Kairav wants to have the pan cakes. Riddhima asks him to have the breakfast with Kartik.

Kairav wants to just go to Riddhima. Naira asks Kartik to take Kairav. She just wants Kairav’s happiness. Kartik and Kairav join Riddhima for breakfast. Riddhima falls for Kartik on seeing his care towards Kairav. Kartik thanks Riddhima for surprising Kairav. Riddhima tells that Kairav is special for her. She wants to accompany Kairav for the football ball. Kartik tells that he takes Kairav always. She asks him to relax. He plans to spend time with Naira and Akshara. She gets a little emotional.

She praises him for being a good husband. He gives the credit to Naira, who is a good wife. She tells him that his problems will end soon. He wants to go back to his family. Gayu cries for Vansh’s pain. Surekha wants Gayu to have hopes, Vansh will recover soon. Vansh takes Lav and Kush’s advice. He admits the truth about the incident. He fears Gayu will react angrily. He tells Gayu that Kairav didn’t push him, he had jumped on his own to fulfill the challenge. He apologizes for lying to her because of Samarth’s fear.

He proves that Kairav is innocent. He tells her that Lav and Kush explained him that he is wrong and should admit the truth. Naira learns that Kairav is going to play the football and even Riddhima is with her. She doesn’t want Kartik and Kairav to get divided. She calls up Kartik for a meeting. She finds Riddhima with Kairav. Kartik arranges a surprise for Naira and makes her wait. Riddhima imagines Arjun when she sees Kairav playing the game. Naira joins Riddhima in the meantime.

Riddhima mentions about her son Arjun. Naira asks Riddhima to share her emotions. Riddhima knows that no one can lessen her pain. She tells that Kairav makes her forget the pain for some time. Kairav gets accused by the boys for cheating. Naira takes Riddhima’s help. Gayu grows restless and tells that she wants to speak to Naira. She tells that Vansh has told her the truth. The family gets hopeful that she will call Naira home. Riddhima encourages Kairav as Naira taught her. Kairav gets love from Riddhima and hugs her. Riddhima answers the boys. She supports Kairav.

Naksh tells Gayu that Kairav is innocent. He wants things to get fine. Gayu makes a shocking statement which upsets the family. Gayu tells them that Naira got Lav and Kush on her side and made them convince Vansh to take the blame. Naksh asks Gayu not to make calls to Naira and trouble her further. She accuses Naksh for always favoring his own sister. She tells that he has never given her Naira’s place. Kirti takes a stand for Naksh. She asks Gayu not to blame Naksh for the partial treatment. Naira plays the game with the boys.

She tells them that one can play honestly and win. She asks them to admit the truth if Kairav did cheating. She makes them realize their mistake. She sends them to apologize to Kairav. The boys apologize to Kairav and tell him about a lady who explained them their mistake. They ask Kairav to join the team. Kairav misses Naira. Kartik feels proud of Naira, who is away from her son but still keeping her duties. Kairav asks Kartik if Naira is back. He admits that he misses Naira. He wants to meet Naira. Riddhima doesn’t think its a good sign since Kairav will no longer need her if Naira unites with him.

Reviewed Rating for this particular episode Yeh Rishta Vansh big confession 12th December 2020 Written Update: 2/5 This rating is solely based on the opinion of the writer. You may post your own take on the show in the comment section below.