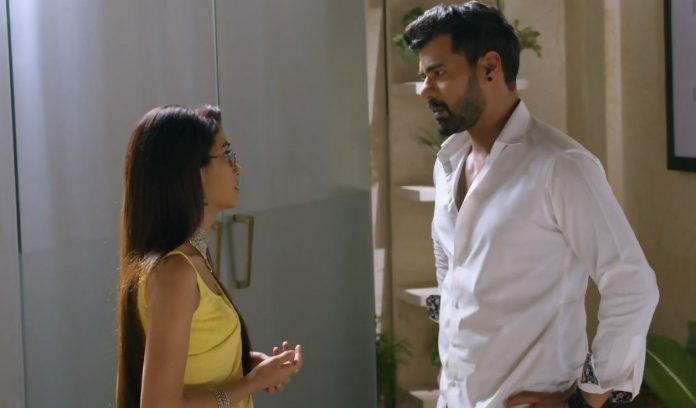 Kumkum Bhagya 16th December 2020 Written Update Battle for life Pragya realizes that she should give a chance to Abhi for the sake of her daughters. She wants her daughters to get together. She can’t see the differences in the family. Pragya hopes to stop Abhi and Meera’s marriage. Prachi tells Shahana that she planned many things on finding her sister, but Rhea isn’t so deserving. She wants to speak to Pallavi to know about her health. Shahana tells that Pallavi won’t be happy to speak to them.

Prachi calls up Ranbir to ask about Pallavi. He gets scared that Prachi is calling him to clarify about Rhea and his alliance. She asks Ranbir to answer her the truth. He tells that he will never lie to her. She asks about his mom’s health. He tells that she is okay. He informs her about Abhi and Meera’s marriage. Prachi fails to hear about Abhi’s marriage. The network goes.

Shahana tells Prachi that she should talk to Ranbir romantically. Ranbir tells that everyone is at the same mall, maybe Rhea didn’t tell Prachi about Abhi’s marriage. He feels he should tell Prachi about her dad. He knows Prachi will be hurt. Abhi returns the jewellery to Ramnik. Ramnik apologizes. Sarita confronts Abhi for his misleading behavior. Tony and his gang spot Pragya. They find the necklace with Abhi. Abhi asks Ramnik to keep the necklace safe. He returns the deposit.

Abhi and Pragya have a moment again. Sarita wants him to marry Pragya instead Meera. She wants Pragya to get her life’s deserved happiness. Prachi and Rhea get into an argument. Prachi sees her parents longing for each other. She comes across the same robbers. The robbers gang reach Abhi and Ramnik to get the jewellery. Ramnik asks Tony to keep the necklace and ring in the locker. Tony happily gets it and makes an escape. Ramnik calls the security. Tony gets caught at gun point. Tony’s gang gets the hostages and shock Abhi and Pragya. Abhi secures Rhea and worries for Pragya, who is far from him. Abhi and Pragya will be seen battling for their lives and also protecting their daughters from the robbers’ attack.

Meera tells Aaliya about Abhi’s emotions for Pragya. Aaliya tells that Abhi is just emotional for his daughters. She asks Meera to keep Pragya away from Abhi. She doesn’t want Pragya’s magic to work on Abhi and Meera. Meera finds the robbers inside the mall and gets worried. Tony and the gang get Ramnik at the gun point. Abhi handles the situation and asks Rhea to get away. He wants to save her first. Pragya worries for Prachi and Shahana.

She rushes to get them. Sarita confronts Abhi for doing so wrong with Pragya. Abhi tells that he will answer her everything once they get out of this mess. Prachi hears a gun shot and tells Shahana that something is wrong. She worries for Sarita and Rhea. She wants to check about them. Shahana tells that they will carefully check. Abhi tells Rhea that they can’t go out, they have to hide. Rhea tells that robbers will steal the jewellery and go, they won’t be in trouble. Abhi tells that he wants to safeguard her. He wants to find Pragya and Prachi. Sarita tells that Pragya was already worried. Abhi is ready to help Pragya.

He asks Sarita to stay with Rhea. Sarita asks Rhea about Meera. Rhea tells that Meera had gone out. Rhea tells that she wants to go out to Abhi and help him. Sarita doesn’t want Rhea to go. Sarita fears the robbers.

Pragya meets Prachi and tells her about the robbers’ attack. She asks her to hide quickly, the robbers have come to get the antique jewellery. Meera faces the goons and runs away from there. Ramnik wants to save the jewellery. He checks the safe. He keeps the precious jewellery inside. He gets caught by Tony. Tony wants to find the necklace. Ramnik begs him not to dupe him.

Tony reprimands him for not giving him the jewellery. Ramnik makes an escape. Tony wants to find out the necklace at any place. Ranbir misses Prachi. Aryan tells him that he shouldn’t lose out the heart soon. Ranbir tells that Pallavi is critical, its the final challenge for him, he can’t let her down. He tells that he loves Pallavi a lot. Aryan asks him what about Prachi.

Ranbir tells that he just wants a chance to fight with the fate, why did he meet Prachi if he had to lose. Aryan asks him to just fight with the fate and find a way out. He asks Ranbir not to lose his love. He gets a news of the robbers’ attack in the mall. Ranbir tells that Prachi, Abhi, Rhea are also at the mall. He wishes that Prachi is safe there. He rushes to the mall. Aryan also accompanies him. Will Abhi and Pragya secure their daughters? Keep reading.

Reviewed Rating for this particular episode Kumkum Bhagya 16th December 2020 Written Update Battle for life: 3/5 This rating is solely based on the opinion of the writer. You may post your own take on the show in the comment section below.