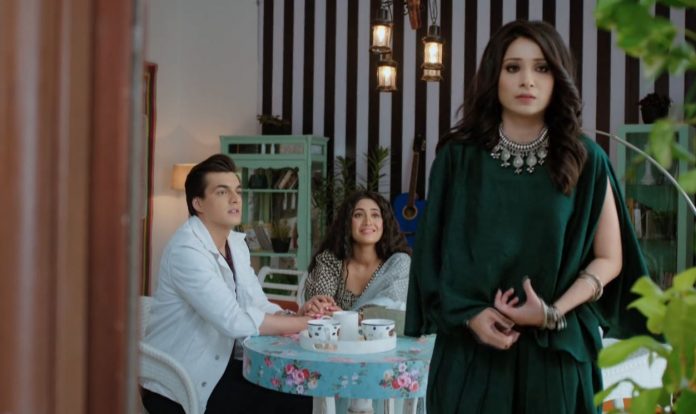 Yeh Rishta Riddhima truth exposed 14th December Written Update Kairav gives a good news to Kartik. He tells that he misses Naira a lot. He tells Kartik that Naira should come to meet him. Kartik wants Kairav to miss Naira more and meet her by his own wish. He tells Kairav that things will eventually happen as planned. He doesn’t want to put pressure on his son. Kairav is glad. Riddhima likes the way Naira has saved Kairav from the bullying. Naira tells that its her duty to save her son.

She asks Riddhima to try her favorite perfume. Riddhima likes it. Kartik reaches there and doesn’t see Riddhima at the window. He gets the same fragrance and assumes her to be Naira. He confesses his love to Naira. Riddhima feels love for Kartik. She is hurt that she never received respect from her husband. She wants a perfect husband like Kartik. She misses such a life partner. Kartik’s efforts go waste after he emotionally shares his poetry with her. He finds Naira somewhere else. He realizes that it was Riddhima hearing his poetry and confession.

He tells her that he has planned a special date. He goes to hug Naira. Naira tells that he has gone to a wrong place. Kartik is thankful that he didn’t hug Riddhima. He apologizes to her. Riddhima tells that its her mistake to try Naira’s perfume. Kartik feels embarrassed. Naira tells that she loves the poetry so much that she would like to remarry him. They have a cute hug. Kartik cares for his baby. Riddhima wanted such family.

Kartik asks the helper to handle the baby for some time, until they go on their date. Riddhima wants to leave as well. She feels Naira is much lucky. She wants her fate to become like Naira’s. Kartik takes Naira to his flat for the surprise. Naira loves the surprise where he revives her golden memories. They spend a romantic time. He tells that he is proud seeing the way she has taught a good lesson to the kids. She is proud of brave Kairav for not losing out to the kids. Kartik tells that Kairav is her son.

He tells that Kairav is missing her a lot, he may soon come to meet her. She expresses her joy to Kartik. She tells him that she feels like dancing. She wants to meet Kairav. He tells that they will talk to Riddhima and take her permission before meeting Kairav. He tells that they will meet Riddhima right away. They go to Riddhima’s flat and meet her. They thank Riddhima for treating Kairav’s emotions. They feel Kairav is ready to meet Naira now, he needs his mother. Riddhima stops them from thinking so.

She reminds them about Kairav’s mental condition when he faces Naira. She tells that she will never permit them to meet Kairav, she will never leave Kairav at any cost, who is like Arjun for her. They are stunned by her confession. Anyway, this turns out to be her dream. Kartik tells that Kairav is yearning to meet Naira. He doesn’t think they should keep Naira away from Kairav. Riddhima wants Kartik and Kairav with her.

Kartik requests Riddhima and convinces her. Riddhima asks them to go ahead if they are so confident. She adds that if Kairav doesn’t accept Naira, then the chances of losing him will get more. She scares Kartik and Naira by her prediction. Riddhima justifies her decision. Naira tells that a doctor isn’t close to the kid as the mother. She feels she has already been late. She doesn’t want any delay. She proposes an idea that they will make Kairav meet Akshara first. Kartik likes her idea. Riddhima doesn’t know a way to hinder Naira.

She decides to not get involved in Naira’s idea. Kartik tells that he will take a risk, he will try out the idea. Naira wants Kartik not to make any mistake. Kartik takes her best wishes. He assures that he will fix up everything. Naira expects him to bring a good news. Will Kartik and Naira succeed? Keep reading.

Reviewed Rating for this particular episode Yeh Rishta Riddhima truth exposed 14th December Written Update: 5/5 This rating is solely based on the opinion of the writer. You may post your own take on the show in the comment section below.