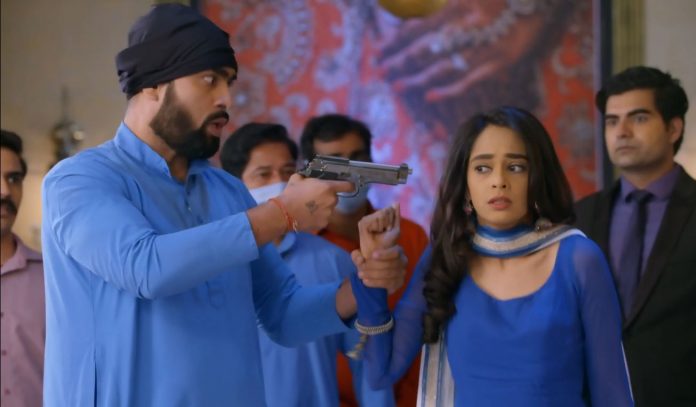 Kumkum Bhagya 17th December 2020 Written Update Prachi in danger Pragya tells Prachi that she has to find an escape route and take them out safely. Pragya, Prachi and Shahana hide from the robbers. They come across Abhi, who has come to rescue them. Abhi tells that he isn’t any thief. Pragya asks him where did he leave Rhea. He tells that he left Rhea safely. Rhea comes to him and helps him. She tells that she came to rescue him. She calls his plan wrong. He tells that his plan is right. Ramnik asks Abhi to save his life from the robbers.

He tells that the robbers want to steal the costly necklace. The robbers get Ramnik, Abhi, Pragya and others at gun point. They command Ramnik to get the safe keys. Ramnik refuses to cooperate. The robber shoots a staff lady. This shocks Abhi and Pragya. Abhi tells that he will not let them get the keys. Pragya doesn’t want Abhi to take the risk. She feels he is inviting troubles like before. He tells the robbers that he will give him the key, once the people are safely sent out from the mall.

The robbers take all of them outside. They don’t spare any of them. They shoot randomly. Two of the staff personnel get shot. This shows that the robbers are quite serious of the threatening they gave in advance. Abhi doesn’t want his family to suffer because of the robbers’ madness. Abhi and Pragya’s differences don’t subside.

The robbers don’t find the staff in the jewellery showroom. Tony’s friend Guru tells that there is no exit for the staff, it means the staff is still inside the hall and hiding from them. Tony and gang look for the staff to make them hostage. They look around and find the staff hiding close behind some chambers. The robbers also get the staff at gun point. They threaten to kill many lives if Ramnik refuses to give the locker key. More of the staff gets in danger. Abhi and Pragya try to defend the robber’s attack. They see the robbers taking Prachi at the gun point. They ask the robbers not to harm their daughter. Rhea is worried that her sister is under the huge threat.

Pragya tells that she will tell them about the locker key, but they have to leave Prachi first. Pragya takes a move to secure her daughter. Abhi doesn’t want Pragya to take the danger on her head by diverting the goons. He also takes a step ahead to save Prachi from the goons, by lying that he has the keys and he will hand it over to the robbers once they leave Prachi free. Abhi and Pragya have parents’ unconditional love for Prachi and Rhea. Will this worse incident bring the best in their lives and unite all of them? What do you think of another robbery-hostage track in the show? How do you think this track will lead? Comment below about your opinion. Keep reading.

Meera gets worried for Abhi and Rhea. She doesn’t find their car outside. She gets relieved that they have gone home. She gets Aaliya’s call. She informs her about the robbery. She is glad that Abhi and Rhea are safe. She then spots Abhi’s car. She tells Aaliya that Abhi is still inside with Rhea. She panics for them. Aaliya asks her to stay outside and not panic further. Meera runs to see Abhi. Aaliya informs the police about the robbery at the jewellery shop. Inspector Saaho takes charge and proceeds to stop the robbery.

Pragya lies that she has the keys with her. Abhi knows she is lying. Guru asks Pragya about the key. Pragya tells that she doesn’t have the key. She tells that they can’t kill someone for the jewellery. Guru tells her that the necklace is worth 50 crores, he wants that necklace. Pragya keeps her condition that she wants to speak to Ramnik first, that too in private. Ramnik refuses to go. Abhi asks Ramnik to just listen to Pragya, he will do many promotions and also invest in his company. Ramnik asks Pragya to talk to him right here.

He doesn’t want to lose his life. Abhi tells Ramnik that his daughter is at gun point, he can do anything to save her. He asks Ramnik to just go. Ramnik has the keys. Abhi tells that he will tell the robbers about the key if he doesn’t listen. The robbers agree to Pragya and send her with Ramnik. Abhi asks Prachi not to worry, he is always with her to protect. Pragya begs Ramnik to give her the keys. Ramnik tells that the robbers can kill everyone after getting the key. She argues for her daughter’s life. She tells that Prachi is in danger.

Ramnik tells that she is getting emotional, everyone’s lives is in risk. Pragya threatens to tell the robbers about the key. Abhi reaches Pragya. They both argue about the key. Ramnik finds a way to escape. The robber follows him. Ramnik runs out of the shopping mall. The robber sees Inspector Saaho. He runs back to inform the gang. Meera and Ramnik ask Saaho to save the showroom from the robbers. Meera asks Saaho to inform Abhi and his daughter. Saaho promises to save all of them. Pragya accuses Abhi for his wrong idea. Abhi tells that his idea was right, he didn’t know about the necklace. Pragya asks him to do something special to become special.

She is angered that he is always acting foolish. She tells that Ramnik went with the key. Abhi asks her not to blame him. She tells that he is the problem, and now her life has become a problem. Abhi tells that he will give a solution. The robber takes them at gun point. Shahana argues with the robber. Sarita stops Guru from hurting Shahana. He tells that Shahana is immature. Abhi and Pragya go back to their daughters. Guru and Tony learn that Saaho has come with his team to stop the robbery. They demand Abhi and Pragya to tell them about the key. They don’t want to give them life if they are useless.

Abhi tells that he can also go to meet Ramnik. The robbers tell Prachi that he will shoot down Abhi and she can hear the gun shot outside if she fails to return with the key. This puts Prachi in a big test. Saaho prepares for the battle with the robbers. The media arrives there to cover the news. Saaho doesn’t like the media attention. He asks them not to challenge the police. He asks the media persons to go in and save the people from the robbers if they dare. He wants the media to leave. A new enemy is seen. Who is he? What will he do in this robbery track? Keep reading.

Reviewed Rating for this particular episode Kumkum Bhagya 17th December 2020 Written Update Prachi under danger: 4/5 This rating is solely based on the opinion of the writer. You may post your own take on the show in the comment section below.