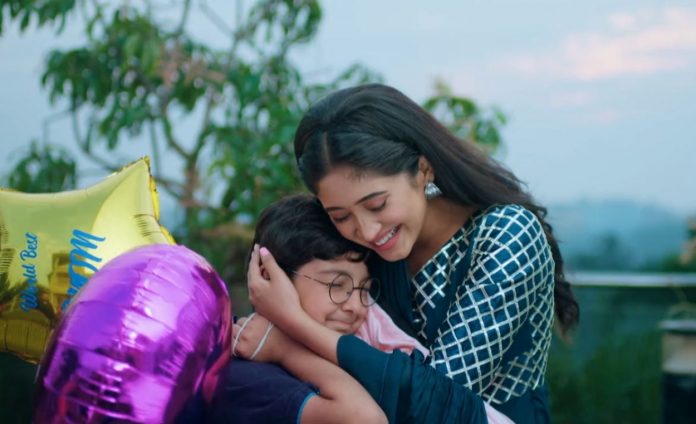 Yeh Rishta Naira Kairav unite 15th December 2020 Written Update Kartik and Naira try hard to convince Kairav that they will soon have a happy family meet. Kartik acts that he is missing his daughter a lot and want to see her once. Kairav tells that he also misses Akshara a lot. He tells that he was imagining Akshara around, because he is really missing her. Kartik tells that he wishes to meet Akshara, but he is helpless. Kairav asks him to call Naira and tell her to bring Akshara home. Kartik gets glad. Naira overhears them.

She gets much happy. She dances with joy. Kartik calls Naira to inform her that Kairav wants to meet Akshara. Kairav tells that Akshara has to meet them. He wishes that Naira comes along tomorrow. Kartik tells Kairav that they will meet Akshara. Riddhima finds Naira succeeding once again in her plan. She gets envious watching Kartik’s love for Naira again. She wants Kartik to be with her. Kairav longs for mother’s love. Riddhina asks Kartik if its a special day. Kartik tells that there should be something special when Kairav meets Naira.

He wants to test Kairav’s reaction. He tells Kairav that Naira will like their surprise. He wants Kairav to contribute his efforts. Kairav gets to see Naira and calls her. Riddhima wants to know if Kairav has called her mumma. She gets worried when he runs on the road after Naira. Naira rushes away from Kairav’s sight. She speeds up to save Kairav from an accident. Kartik gets angry that Kairav ran on the road. Kairav tells that he has seen Naira around. He sounds sure. Kartik tells that Naira isn’t here, maybe he was dreaming because he is missing Naira.

Kairav believes him. Kartik and Riddhima console Kairav. Naira’s fear gets less. She is hopeful that Kairav will react happily on meeting her. Riddhima gets a foot sprain. Kartik cares for her, which gives her many new hopes of a union. Kartik and Riddhima ask Kairav to be careful and not risk his life. Naira gives the good news to Naksh that she is going to meet Kairav after a long time. Naksh congratulates her. Naira tells Naksh that Kairav has forgiven her. Naksh tells that she is a great mother, who kept patience for months.

She gives the credit to Kartik and Riddhima as well. She tells that Riddhima has united her with Kairav. She praises Riddhima. Riddhima wants Kartik and Kairav in her life forever. She feels she deserved such a happy family. She wanted to be lucky like Naira. Naksh celebrates the joy with the family. He doesn’t tell the family about Naira and Kairav’s happiness. Dadi misses Kairav. Naksh tells them that they will go and meet Kairav. Manish asks Naksh how did he decide it, when he stopped her last time.

Naksh tells that they will get Manish’s check up done before. Manish tells that he won’t let them go without him. The family makes a plan to visit Kartik and Naira’s house. Gayu is upset. Naksh wants the distance to get less. Naksh is hopeful that Gayu and Naira will unite. Kartik and Naira want the night to end soon so that they meet Kairav. She can’t control her excitement. He tells her that very soon, she will get to see Kairav’s love for her. The couple dances romantically and spends time. They wish the morning comes soon. Kairav dreams of meeting Naira. He wants to tell Naira that he loves her a lot.

Kartik gets glad to hear it from Kairav. He wants Kairav to miss Naira more. He tells Kairav that his dream will come true soon. He knows that even Naira would be dreaming at this time. Kairav tells that he wants to meet Akshara also. Kartik tells that Naira will be coming soon. Kairav rushes to get ready. Naira and Kairav get close to reunite. Kartik is in hurry to watch their happy union. He doesn’t want anything to go wrong. The police reaches the building for a car theft case. Kairav misunderstands that Naira got the police to get him arrested. Kartik fails in reaching in time and clearing the confusion. Is Riddhima behind the police’s arrival to distant Naira and Kairav again? Keep reading.

Reviewed Rating for this particular episode Yeh Rishta Naira Kairav unite 15th December 2020 Written Update: 4/5 This rating is solely based on the opinion of the writer. You may post your own take on the show in the comment section below.