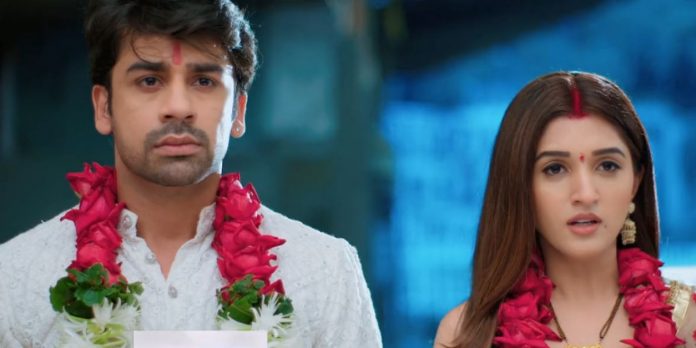 Anupama 15th December 2020 Written Update Paritosh Kinjal marry Vanraj is glad that he could eat good food with the family. Anupama asks him to leave his lies outside the house when he comes next time. Vanraj wants to talk to Paritosh. Hasmukh knows she is strong-headed, she still has faith on her relations. Anupama leaves Vanraj and Paritosh alone for a talk. Samar hopes that Vanraj helps out Paritosh in the matter. Vanraj tells Paritosh that Rakhi is an arrogant lady, she wasn’t happy with the alliance and wanted an excuse to break it.

He tells that Vanraj just knows to spoil things. He adds that Anupama had fixed the alliance before by convincing Rakhi, but Vanraj is responsible for the break up. He doesn’t think Vanraj is of any help. Anupama finds Paritosh leaving in anger. She asks Vanraj the matter. Vanraj tells that Paritosh has no faith in them, he may do anything wrong in depressed sorrow and anger. He asks Anupama to explain Paritosh not to take any wrong step in anger. Kavya calls up home to speak to Vanraj. Vanraj is angry that Kavya doesn’t give him peace.

Kavya reprimands Vanraj for visiting his house. He tells her that he had come home to visit Paritosh, who had a panic attack. He asks Kavya if he should come back home. He hears Anirudh singing a song and taunting him. He angrily decides to stay in the house. Anirudh tells Kavya that he won the bet. She begs him to spare her. She tells him that she can’t lose Vanraj. She asks him to take money or the house, but let her unite with Vanraj.

Anirudh tells her that life is just about perspective, Vanraj has come between them. He is confident that he will win Kavya one day. Samar and Anupama find Paritosh batting with his emotional let down. Anupama doesn’t think Paritosh will understand anything. She lets Samar stay with Paritosh. Samar feels helpless that he isn’t able to help Anupama or Paritosh. He tells that love always hurt. Nandini has bad memories of her past relationship. He asks Nandini to share the matter with him, that he will never judge her. Paritosh wants to meet Kinjal.

He knows Vanraj can’t help him. He doesn’t want Rakhi to insult Anupama. He asks Samar and Nandini to help him. Samar fears that Rakhi will file the complaint against Paritosh. Paritosh doesn’t hear anything. He runs to meet Kinjal. Nandini asks Samar to go after Paritosh. Anupama makes prayers for Paritosh and Kinjal. Leela gets emotional that she couldn’t save Vanraj and Anupama’s relationship. Later, a furious Rakhi calls up Anupama. She targets Anupama. She threatens to send Anupama to the jail along with the entire family.

She informs that Kinjal is missing, Paritosh might have eloped with her. She tells that she is bringing the police to Shah house. Anupama is shell shocked to know about Kinjal’s disappearance. She asks the family about Paritosh. Samar doesn’t find Paritosh. Anupama tells that Rakhi suspects that Paritosh and Kinjal are together. Samar tells them that Paritosh had gone to meet Kinjal at night, he decided to elope and asked him to keep the secret. He doesn’t know where did Paritosh take Kinjal. Anupama gets scared that Rakhi will not forgive them this time.

Vanraj rebukes Anupama for not knowing about Paritosh’s disappearance since night. Anupama wants him to reprimand her later. She tells that they should seek help from the police. The police arrives home on Rakhi’s call. Rakhi brings the police to get them arrested and teach them a big lesson. Leela gets worried when Rakhi turns her threatening true. Rakhi demands to know about her daughter. Vanraj loses his family respect when Rakhi insults them publicly. She takes the drastic move. Anupama tells that even her son is missing. She asks Rakhi not to blame them.

Rakhi rages when Vanraj interrupts. She reveals about Vanraj’s affair to the neighborhood. She asks Vanraj why are they scared of the drama when they just know to do drama always. Anupama asks Rakhi not to insult them further. Rakhi tells that she wants her son back. She accuses Vanraj and Anupama for always trapping her innocent daughter. She wants the police to take action against Shah family. She asks the inspector to arrest Anupama for provoking Kinjal for eloping. Paritosh and Kinjal get married and return home to stop Anupama and Vanraj’s arrest.

Reviewed Rating for this particular episode Kumkum Bhagya 16th December 2020 Written Update Battle for life: 5/5 This rating is solely based on the opinion of the writer. You may post your own take on the show in the comment section below.