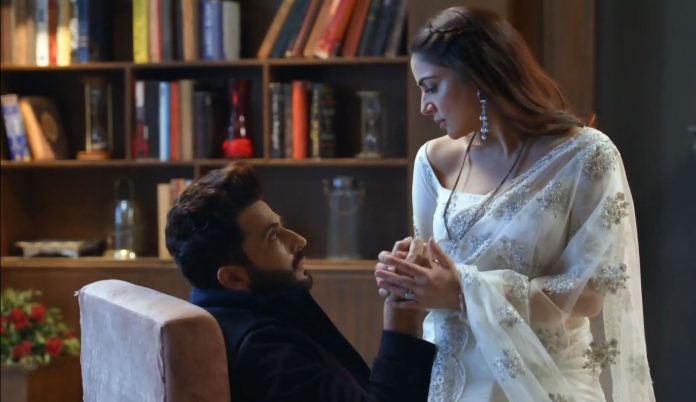 Kundali Bhagya 22nd December 2020 Written Update Alert Preeta Sherlyn tells Mahira that they will drug Karan so that Karan loses out his control and imagines Preeta with him while he gets intimate with Mahira. She feels that its a sure shot plan to trick Karan. She tells Mahira that she will have to record their intimacy as a proof to convince Karan when he forgets about the night. She asks Mahira to tell Karan that she can blackmail Karan for marrying her. Mahira also prepares a story to be ready to convince Karan.

She tells that he was acting unaffected by her presence, but his gesture proved something else. He doesn’t let her go. He tells that she can go if she wants, else she can sit for a while and talk. He doesn’t want her to go away. He expresses his feelings. He tells her that he feels a lot of emotions when she is with him. He also wants her to feel his presence. Karan finds a moment of romance. Preeta’s dreams turns true when she finds her life becoming the perfect.

She gets tears of joy. She always knew that Karan will love her a lot and also pay her the respect. She gets glad that all their ego clashes and issues got sorted. She wants him to be the sweet Karan always. Karan asks Preeta to keep his clothes ready. Preeta gives him some options. He doesn’t like her choice. She asks him to select his clothes himself. Shrishti calls Preeta and Karan. She doesn’t get to talk to them. She takes much tension, but thankfully has Sameer on her side. Preeta finally answers Shrishti’s call.

She tells Preeta that its good news that Karan is with Preeta. She alerts Preeta of Sherlyn and Mahira’s presence in the resort. Preeta realizes that she had seen Mahira. She tells that Sameer has helped her, Mahira has tricked everyone and left the house to follow Karan. She asks Preeta to find out Mahira’s plan, since Mahira is really criminal-minded. She wants Preeta to inform Karan. Preeta tells that she told Karan about it already, but he got irritated.

She doesn’t know what will happen. She asks Shrishti to come soon and help her. Shrishti tells that she is coming to help her sister. She praises herself for being a gem. Preeta awaits Shrishti and Sameer. Karan gets dressed up for an outing. Preeta tells him about Shrishti’s call. Shrishti and Sameer get happy when the cab driver assumes them to be husband and wife, and compliments them. Karan and Preeta enjoy their private time. Mahira follows them. Preeta tries to check Mahira’s entry in the resort register. She finds out Mahira’s room number.

She wants to know what is Mahira planning. Karan plans to attend the masquerade party. Preeta informs Shrishti about Mahira’s room number. Shrishti tells that she is reaching soon, she will not let the evil duo. Preeta likes the masquerade party concept. Mahira and Sherlyn also become a part of the party with evil intentions on their minds. Mahira wants to separate Karan and Preeta. Shrishti finds out Mahira’s plan of spiking Karan’s plan. She informs the plan to Preeta. Will Mahira succeed? Keep reading.

Reviewed Rating for this particular episode Kundali Bhagya 22nd December 2020 Written Update Alert Preeta:4/5 This rating is solely based on the opinion of the writer. You may post your own take on the show in the comment section below.