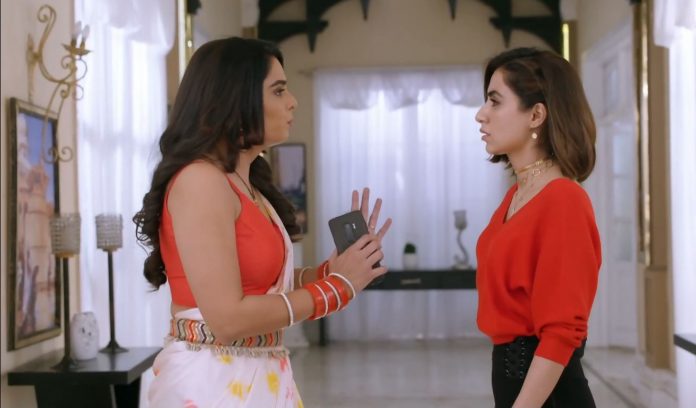 Kundali Bhagya 5th January 2021 Written Update Sherlyn alerts Mahira Sarla prays for Preeta. Shrishti wants Sarla to make prayers for her as well. Sarla tells that she prays for both her daughters. Janki asks Shrishti to talk to Sarla about Sameer. Shrishti refuses to talk. She is shy to talk about the marriage. Janki hopes that Shrishti also get married in the same household like Preeta, so that they share their joy and sorrow. Preeta overhears Kritika’s plans for her wedding functions. Kritika tells Preeta that her friends want a bachelorette party.

Preeta tells her that the party will happen. She takes the responsibility of the wedding functions. She tells that her friends aren’t expecting anything new, the party will be rocking. Kritika finds her the best. Preeta makes shopping plans with her. She waits for Kritika. Preeta wants him to stop behaving kiddish. Karan and Preeta get into a cute argument. He gives her credit card. He wants Preeta to buy anything what Kritika wants.

She doesn’t think she should waste time on him. Kritika asks Karan not to tease Preeta. He asks her not to become Girish and defend Preeta. Kareena is happy that her daughter is getting married. She tells that Kritika’s marriage date is fixed. Rakhi asks if Kritika troubled her so much that Rakhi is so happy that she is going away. Kareena tells that she can meet Kritika anytime she wants, since Akshay shifted to the city. Preeta knows that Kareena is concerned for Kritika. Kareena gives her credit card and asks Preeta to buy anything Kritika wants.

Preeta tells that Karan has already given his card. Karan tells Kareena that he wants to do a brother’s duty. Preeta finds the family happy. She feels Kareena wants to do the best just like Sarla did. She misses her mother. She tells Kareena that she met Kritika first when she came to Luthra house. Kritika tells that Preeta helped her when she first met Akshay’s family. Mahira finds Preeta getting love from the family.

Preeta tells that Kritika is like Shrishti for her. Karan likes Preeta’s positivity. Preeta makes big plans for Kritika’s lavish wedding. Kritika loves Preeta. Rakhi wants the joy to stay. Kritika tells that she will shop a lot and come home. Kareena and Karan find Mahira around. Mahira doesn’t react. She wants some time to pass until she takes the next step. Karan thinks its perfect time to confront Mahira. Shrishti gets surprised when she meets Akshay on the roads. Akshay gives the good news that he is marrying Kritika. Shrishti congratulates him.

She tells that Kritika didn’t even tell her about it. He tells that he has to head to the mall for shopping with his mom. Shrishti tells that she will grace the wedding with her presence, even if he doesn’t send the invite. Shrishti wants to know why didn’t Kritika tell her about Akshay and her marriage. Mahira also wants to be a part of the marriage arrangements. She pretends that she is also helping Kritika some way. Karan takes her permission to enter her room. He taunts her for crossing limits. He confronts her for the trip to Manali.

Kareena fears that she will get caught as well. She lies to Karan that she had sent Mahira to take care of Sherlyn. Karan tells that Mahira didn’t reveal anything such about Sherlyn. He asks Kareena not to believe Sherlyn or Mahira. He tells Kareena that Mahira came to Manali with evil things in mind. Mahira tells that Preeta has brainwashed her. Sherlyn excuses Mahira to save themselves from the big confrontation. Karan asks Kareena to send away Mahira. He can’t tolerate Mahira further knowing she had tried to molest her.

Kareena is relieved that Preeta didn’t take her name and made Karan against her. She also thinks Mahira should leave for some time. Preeta and Kritika shop for the wedding. Kritika invites Akshay for the shopping. Akshay apologizes and makes work excuse. He tells her that he won’t let her work stress reach her. He wants to keep her happy. He tells that he can’t postpone the important meeting, when the business is suffering. She respects his work. She tells that she will finish her shopping with Preeta’s help. He is glad to see her understanding. Preeta finds Kritika’s face turning dull.

Kritika tells that Akshay was sounding much stressed about his business. She wants Akshay’s presence, since they are soon to get married. Preeta asks her not to feel bad about it. Shrishti and Kritika have a talk on phone. Kritika tells that she is marrying Akshay, he is busy in work and couldn’t accompany her for shopping. Shrishti thinks Akshay is going to surprise Kritika, since he went to the same mall.

Kritika asks Shrishti to join her for shopping. Sherlyn wants Mahira to forget everything. Mahira tells that Preeta is becoming everyone’s favorite. Sherlyn asks her to wait until they find a chance to tackle Preeta. Mahira agrees to her. What wil the evil duo plan now? Will they strike Mahesh again and blame Preeta? What is Akshay hiding from Kritika? Comment your views on your favorite show’s coming twists. Keep reading.

Reviewed Rating for this particular episode Kundali Bhagya 5th January 2021 Written Update Sherlyn alerts Mahira:3/5 This rating is solely based on the opinion of the writer. You may post your own take on the show in the comment section below.