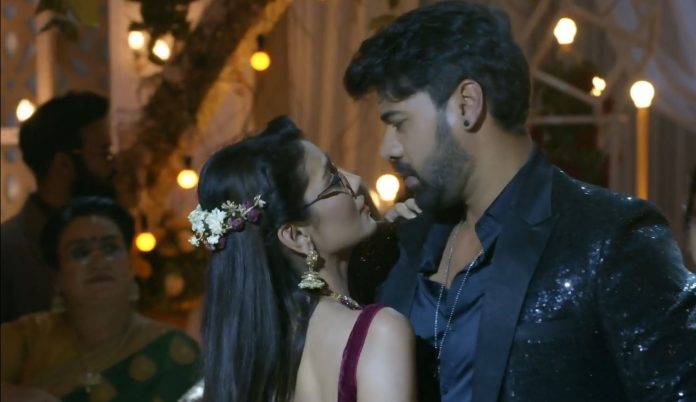 Purab drags Meera into the argument. He tells that Abhi loves Pragya, Meera shouldn’t marry Abhi. Abhi stops Purab from dragging Meera into the matter. He doesn’t want Purab to interfere in his matter. Abhi gets upset that Purab is taking Pragya’s side. Vikram meets Abhi to discuss work. Abhi doesn’t want any business meetings on his haldi ceremony day. Purab tells that he will come with Pragya. Abhi doesn’t want to talk about Pragya. He feels hurt by her silence. He misses her a lot.

Sarita asks Pragya why is she letting her love go away. Pragya tells that she is feeling bad to leave her rights on Abhi. Sarita tells her that she has strong and true love, nobody has shown such a love for each other. She tells that both of them tried to protect each other, its their love, they are lucky to get their love. She asks Pragya to save her love. Pragya feels its too late.

Sarita tells that love is still the same, there is time to get Abhi and a new life. She advises Pragya as her mother. Baljeet tells Mitali that nobody will take Pragya’s place. She asks Raj and Mitali not to forget Abhi and Pragya’s true love. She wishes Raj supports Abhi by clearing his heart for Pragya. Baljeet knows that just Purab wants Abhi and Pragya to unite. She wishes Abhi listens to Purab. Purab is still affected by Disha’s memories.

Aaliya finds him smiling in sleep. She hears him taking Disha’s name. She hates the fact that he loves Disha. She breaks a glass and also his dream. She doesn’t want him to remember that she is his wife. Purab doesn’t like her to get close to him. She tells him that he has to get ready for Abhi’s haldi. Purab and Aaliya pretend to be perfectly happy family in front of Aryan. Aryan loves them a lot. He feels lucky to have such good parents. Aaliya knows that Aryan will always keep them together. Pragya and her family get welcomed by Baljeet in Abhi’s haldi. Prachi looks for Rhea to know if Rhea is really going to stop the wedding. She wants an answer from Rhea. Raj informs Aaliya that Digvijay has come.

Prachi doesn’t think Rhea kept her promise. Pragya greets Meera. Ranbir doesn’t want to talk to Prachi in front of everyone. Abhi and Pragya’s encounter in the haldi ceremony makes Meera insecure. Abhi tells Pragya that she would also want his happiness for which she is permitting his second marriage. Abhi and Meera sit for their haldi. Abhi puts Pragya in a fix by asking her to apply the haldi to her.

Reviewed Rating for this particular episode Kumkum Bhagya 8th January 2021 Written Update Abhi haldi ado:4/5 This rating is solely based on the opinion of the writer. You may post your own take on the show in the comment section below.

Anant and Gehna get married. Its a new start for Gehna. She gets disturbed when she finds Anant responding to Radhika’s calls and going away to meet her on their wedding night. She doesn’t want Anant to leave her alone. She doesn’t tell anything to stop him. Radhika becomes a problem for them when she enters their lives as a trouble. Anant doesn’t want to hurt Radhika by breaking all the ties for the sake of new relations. Anant’s old relations cast a shadow on Gehna’s future and happiness. Hetal tells Gehna that her fate will always be poor, Anant can’t end his relation of five years with Radhika in a moment. Gehna sheds tears in loneliness.