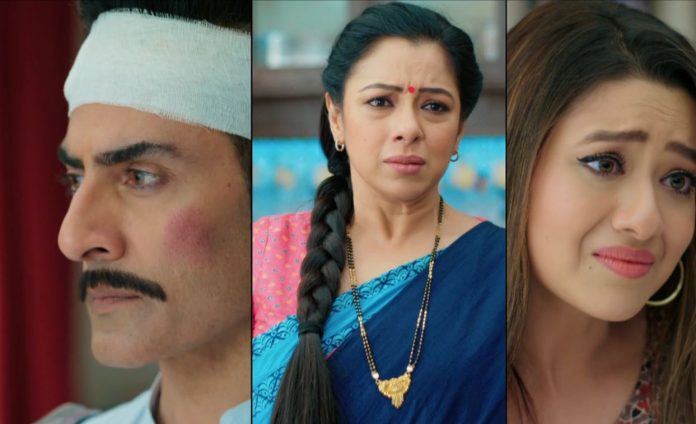 Anupama Written Update 9th January 2021 Rakhi Kavya warned Leela reprimands Kinjal and asks her to leave the house if she wants to go away. Kinjal doesn’t deter. Anupama stops Kinjal from leaving the house. She tells Kinjal that they can’t make mistakes like others as an answer. She tells that nobody stays happy after leaving the family. She doesn’t want her to forget the difference between right and wrong, one can’t forget relations. She doesn’t want to do wrong with Vanraj seeing his sick condition. She shows sympathy for Vanraj.

Vanraj realizes Anupama’s greatness. Anupama tells Kinjal that Vanraj has relations with everyone, even if one relation broke, the other relations holds the same right as before. She convinces Kinjal to stay back with them. Kinjal agrees to stay with the family. Vanraj feels sorry. He feels he had not saved his children’s happiness. He regrets the fact that Kavya had ruined Paritosh and Kinjal’s happiness. Rakhi makes an unexpected entry just when Vanraj apologizes. She drags the same drama.

She tells that she has come to meet Paritosh and Kinjal. She acts surprised to see Vanraj back. She asks Vanraj if his accident a side-effect of Kavya’s drama. Leela insults Rakhi like before. Hasmukh and Anupama ask Leela to stop the insult. Leela asks Rakhi to behave well. She blames Rakhi for Vanraj’s accident. She tells that Rakhi had invited Kavya in the marriage. Rakhi blames Leela for giving birth to such a son like Vanraj, who had done wrong with Anupama. She feels Leela is a typical mother, who can’t see his mistakes.

Anupama stops their fights. She tells that if they fight like this, children will learn the same thing. Rakhi tells that she got to know about Vanraj’s accident and came to ask her. Leela tells that Kavya would have informed her. Anupama’s problems get doubled when Kavya arrives home. Anupama’s bad memories flash in her mind. Vanraj didn’t know Kavya will come. He is equally shocked like his family. Rakhi tells Kavya that she was missing her.

Anupama tells Kavya that she will not stop her from meeting Vanraj. She doesn’t want any drama. Kavya tells that she will not do any drama like Rakhi. Kavya also blames Rakhi for provoking her. She tells that Rakhi is very cunning. Anupama asks Kavya not to act innocent and blame Rakhi. She also asks Rakhi to make her family a matter of fun. She warns Rakhi and Kavya against plotting any drama. Vanraj wants to know why did Kavya come.

Kavya expresses her concern for him. Leela comes between them. Rakhi likes the entertainment. Kavya tells Vanraj that they need to talk about the office matters. Vanraj stops her from talking about his job. He agrees to talk to her. Kinjal asks Vanraj and Kavya to speak in front of everyone. Leela asks Anupama to learn from Kinjal. Anupama tells that it doesn’t matter to her. Rakhi also stops Kinjal to show her place. Rakhi passes taunts on Leela and further leaves her raging. She asks Leela to have a cup of tea with her.

Kinjal finds Anupama upset. She knows that Anupama pretends to be unaffected, but she is still affected by Vanraj’s presence. Kinjal tells that Anupama shouldn’t allow Kavya. Anupama tells that everyone just shouts on her, she can’t stop Kavya. She tells that its tough for her to tolerate Kavya, the relation is shattered, but still it exists somewhere. She doesn’t care for Vanraj and Kavya’s affair. She doesn’t want any apology. She wants some peace. Kavya tries to reconcile with Vanraj. She tells that she is really sorry for her fight.

She wants him to forget her bitter words. She expresses her love for Vanraj. She pleads to get his love back. Vanraj wants her to go home. He tells her that they have always fought, he is tired of their fights, he doesn’t want her back. She promises to never fight with him. She wants a last chance. She asks him to come home with her. She promises to look after her. Kinjal knows that Anupama will fall weak some day.

Anupama wants to stop feeling for her relationship. Vanraj takes time to decide. Kavya breaks Anupama’s house model. She apologizes. She asks Anupama if she will join the house. Anupama tells her that she has moved on, she will never look back and get stuck in the past. She doesn’t want Vanraj back in her life, even if he wants to return.

Reviewed Rating for this particular episode Anupama Written Update 9th January 2021 Rakhi Kavya warned: 3/5 This rating is solely based on the opinion of the writer. You may post your own take on the show in the comment section below.