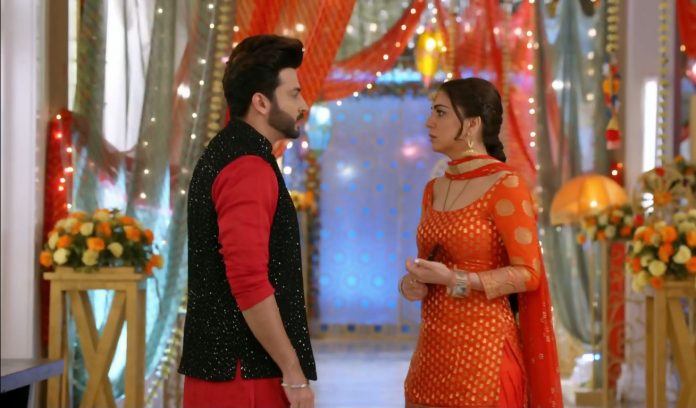 Kundali Bhagya 12th January 2021 Written Update Preeta threatened Ruchika doesn’t want Akshay to go away. She asks Akshay to stay back with her. Preeta tells Kritika that nothing will change in her life, things will get better once she accepts the truth that Akshay is cheating her. She tells Kritika that she doesn’t want to tell her anything. She takes Kritika to show Akshay. She fails to show Ruchika, who got hidden in the cupboard. Karan follows Preeta and Kritika. Sherlyn also comes to know. Kritika asks Preeta if she is talking about Akshay’s drinking habit.

Karan stops Preeta from bringing out such things in front of Kritika. Akshay tells that he got the drinks while enjoying the function. Preeta tells that she didn’t get Kritika with her to show Akshay’s drinks. She tells that she got Kritika to show the girl who was with Akshay some time back. She wants Akshay to confess about the girl. She tells that she had seen Akshay hugging a girl. She makes Akshay admit that he was with someone else.

Preeta tells that the girl was asking Akshay not to marry Kritika. She adds that the girl wasn’t his friend, she was upset with his marriage, he is a bad person for Kritika, he isn’t suitable, he is cheating Kritika. She confronts Akshay to tell the truth. Akshay denies the blames. He tells Kritika that he had a drink when he was nervous.

He had learnt that his business is getting shut. He tells that he has always loved Kritika and is marrying her. He tells her that he will always keep her happy, when he had promised her that he will always be loyal to her, then she shouldn’t doubt him. He tells that if she has doubted them, then its an insult. He reveals that Preeta is accusing him for no reason. He refuses to Preeta’s claims. Kritika shows faith on Akshay who is her lover and would be husband. She also shows faith on Preeta, who never tells anything against anyone without a reason.

Akshay asks her if she wants him to prove himself. Kritika tells that she trusts him, she doesn’t want any answer. Akshay tells that he will clear Preeta’s doubts so that his relation doesn’t go waste. He tells that Preeta may blame him again. He doesn’t want to fall in Kritika’s sight. He claims to love Kritika. He tells Kritika that Preeta is saying the truth, he was with someone in the room, who had come to give the wedding gifts. He tells that Ruchika had come to meet them. Ruchika is tensed when he names her.

Kritika tells that she wanted to meet her as well. He tells that Ruchika was upset that they didn’t tell her and decided to marry. He asks her to check Ruchika’s message. Kritika tells that Ruchika would have come to surprise her. Akshay tells that Preeta has misunderstood him. He gets upset. Ramona asks Preeta to think many times before accusing Akshay, who is the would be son-in-law of the house. Sherlyn tells Preeta that Kareena would get angry on her if she learns this. Shrishti meets Preeta. Preeta tells her about the blunder.

She doesn’t want to upset Kareena or Kritika. Rakhi asks Shrishti why Sarla and Janki didn’t come. Shrishti tells that they aren’t well. Preeta goes to attend the guests. Shrishti waits for Sameer. Ruchika comes out of the cupboard after Shrishti leaves. She doesn’t think she should leave from the door. She decides to leave from the window. She doesn’t want to jump down and break her bones. Shrishti goes to meet Sameer. He suspects someone’s presence in the parking lot. He doesn’t see Ruchika. She decides to go back to the guest room and hide in the cupboard until she gets a clear way out. Karan apologizes to Akshay from Preeta’s side.

He tells that Preeta is concerned for Kritika. Akshay wishes that Preeta knew him well and supported her. He knows Preeta loves everyone. Karan knows that Akshay is a nice guy, he will never hurt Kritika. Kritika thanks Akshay for understanding. He tells that he can do anything for her. Preeta isn’t convinced with Akshay’s answers. Karan asks her to calm her mind. He tells that Akshay isn’t upset with her. He tells that he knows her concern, he isn’t angry on her. They go to ask Kritika if she has forgiven Preeta. Preeta apologizes to Akshay. He tells her that he could have left after breaking the marriage, but he loves Kritika. He threatens Preeta. Do you like this episode? Comment below and keep reading.

Reviewed Rating for this particular episode Kundali Bhagya 12th January 2021 Written Update Preeta threatened: 3/5 This rating is solely based on the opinion of the writer. You may post your own take on the show in the comment section below.