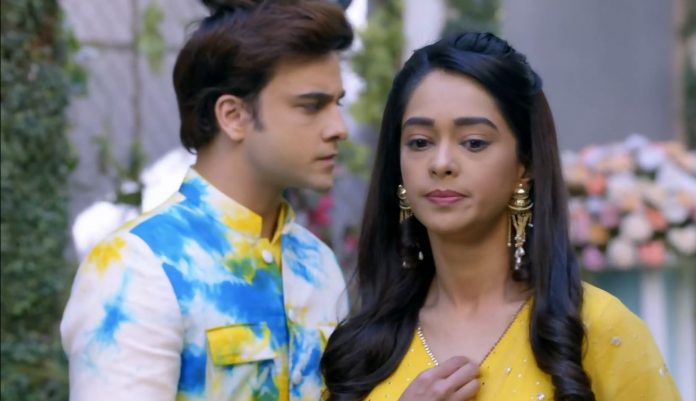 Kumkum Bhagya Upcoming Twists Prachi threatens Ranbir Purab wants Abhi to unite with Pragya if he is willing to. Abhi tells that he had to unite, but he is compelled to marry Meera. Purab tells that Aaliya is still the same, she hates Pragya and has ruined Abhi’s life. Purab regrets that Disha isn’t with him. She tells that he can’t blame her. He wanted Disha to be with him so that he could have united Abhi and Pragya. Ranbir wants to get answers from Prachi. She lies again that she wants money, not love.

He tells her that he knows the reason, Rhea has made her break up with him. He asks how is Rhea blackmailing her. Prachi gets worried. She keeps silence for Pragya’s sake. She asks him to keep self-respect and not get after him. Ranbir tells Prachi that his love is more important than self -esteem. She commands him to leave her alone. She insults him. He tells her that even if she insults him, he will come close to her, since she always stayed back when he told bad things to her. He tells that her love will not let him go away from her.

He looks into his eyes. He tells that she loves him. She threatens to slap him if he doesn’t listen to her. Sarita asks Prachi to come home with her. Prachi asks Ranbir to get real and not follow her. Ranbir doesn’t want to forget Prachi whom he has truly loved. Prachi sheds tears. She wants Rhea to fulfill the promise. She wants to make Ranbir away from her. Rhea is tensed because of Ranbir’s bitterness. She doesn’t think Ranbir will accept her.

Rhea wants to request Meera not to marry Abhi. She is sure that Meera loves her and will listen to her. Meera tells that she will always listen to her. Aaliya stops Rhea by misleading her. She tells that Abhi is calling Rhea to give her an answer. Rhea thinks Abhi has agreed. She jumps happily and runs to meet Abhi. Aaliya lies to Meera. Aaliya tricks Rhea and takes her away. She calls Rhea a selfish girl. She tells that she doesn’t want Abhi and Pragya to unite. Rhea tells that its better than being an evil woman like Aaliya. Aaliya raises hand on her. Rhea tells that she will unite her parents just to unite with her lover Ranbir. She doesn’t think Aaliya can stop her. Aaliya wants to knock off Rhea from her life if Rhea comes between her plans.

Reviewed Rating for this particular episode Kumkum Bhagya Upcoming Twists Prachi threatens Ranbir: 4/5 This rating is solely based on the opinion of the writer. You may post your own take on the show in the comment section below.