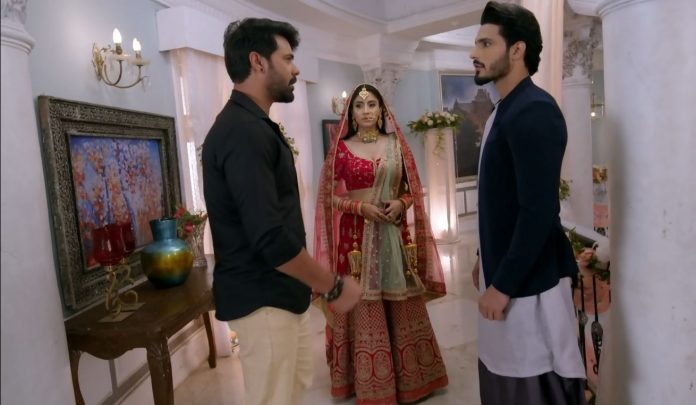 Kumkum Bhagya 15th January 2021 Written Update Abhi secret out Ranbir tells Jai and Shahana his weird plan of filling sindoor in Prachi’s hairline when Abhi’s marriage is going on. Shahana doesn’t like the idea. Abhi tells Purab that he wants Pragya to come and stop his marriage, but she is rigid and always congratulates him. He knows that Pragya loves him a lot, she will show his love. Purab is glad. He tells that he can’t stay without Abhi and Pragya. He tells Abhi that very soon Abhi will get his love and family.

Abhi wants Purab to handle the things. He reveals that Meera knows his true love for Pragya, she is also part of the drama, she doesn’t want to marry him. He tells that he has planned a lot with Meera’s help, Pragya has to come and claim her rights. He asks Purab to call Pragya some way. He tells that Pragya has to do everything this time, he can just play along and handle things in the mandap. Ranbir wants to marry Prachi.

He asks Shahana to get Prachi to the mandap. Shahana doesn’t think she can do it. She tells Ranbir that its too tough for her to convince Prachi and bring her. Rhea is helpless when Aaliya locks her in the room. She fears that Abhi will marry Meera, and then Ranbir will marry Prachi. She doesn’t want to lose Ranbir. Ranbir tells Shahana that Rhea is compelling Prachi, he will always love Prachi and keep her happy. He asks her to just help him for the sake of love. She tells that she will do this just for his sake. She helps him.

She tells that she wants Prachi’s life to get set. Ranbir tells that he will wait for her at the temple. He wishes her all the best. Jai wishes all the best to Ranbir. Ranbir is tensed that Prachi should be in bridal dress. Jai tells that they will take Palak’s help in this case. Abhi gets decked up as the groom. He reasons out that Pragya would be on the way and would be here any time. Purab doesn’t want him to hurry to the mandap. He asks him to confess his plans to the family. He asks Abhi to break the marriage with Meera.

Abhi tells that everyone will behave normally if he tells them the truth. He is taking big risk by calling the real pandit. Aaliya wants Abhi to come to the mandap without wasting time. Purab delays the things. Pandit calls Abhi for the Var puja. Purab insists him to tell them about the plan. Aaliya tells that she is happy to see Abhi happy. She knows Abhi is taking revenge on Pragya. Meanwhile, Pragya lands at the house to stop the marriage. She is so much angry on Abhi that she finally claims her rights on him. She tells that Abhi is her husband and she is his legal wife.

She tells that Abhi is going to marry when he already has a wife. She calls the police to file a complaint against Aaliya and Meera, who knows about Abhi and her marriage and still forced him to remarry. She wants Aaliya to pay a price for the crime. Aaliya is shell shocked as she didn’t expect Pragya to make such an unexpected move. Abhi is much happy that Pragya stopped the marriage and proved their love true. Meera is also happy for Abhi that his love has succeeded. Abhi wants to pull down the curtain on the drama after hearing a sweet love confession from Pragya. Do you think the marriage track is really amazing this time? Comment below and keep reading for further updates.

Shahana has promised Ranbir that she will help him and get Prachi to the temple. She tells Prachi that Palak needs their help. Jai takes Ranbir to the temple. He asks Ranbir to keep patience. Ranbir tells that Jai loves Palak. They meet Palak on the way. Ranbir is thankful to Palak for the help. Palak seems to like Ranbir.

Jai tells her that he is also with Ranbir. Baljeet vents anger on pandit. She is crying to see the fate, where Abhi and Pragya are getting separated. Raj tells that its Abhi’s decision. Abhi comes for his wedding. He asks Baljeet to bless him that his wishful happens. She can’t bless him from her heart. She loves Pragya. Purab stops Abhi from telling anything to Baljeet. They learn that Meera isn’t in her room. Baljeet tells that Meera will not come, she doesn’t want to marry Abhi and left. She had met Meera and made her feel guilty about the marriage.

She had commanded Meera to refuse for the marriage and leave the house. She had done her share of work by asking Meera to leave. She thinks Meera will not come for the marriage, she will not ruin three lives. She knows that Meera can’t take her hatred. She tells Abhi that Meera had ended their problems, she left on her saying. Aaliya gets irritated that Baljeet has ruined everything when the mandap is ready for the marriage. She tells that Abhi will be embarrassed if the bride goes. Abhi tells them that Meera didn’t go anywhere. Aaliya tells that Abhi trusts Meera, he will be happy with her, since they have trust between them. Baljeet thinks Meera has left. Abhi hugs her.

Reviewed Rating for this particular episode Kumkum Bhagya 15th January 2021 Written Update Pragya stops wedding: 4/5 This rating is solely based on the opinion of the writer. You may post your own take on the show in the comment section below.