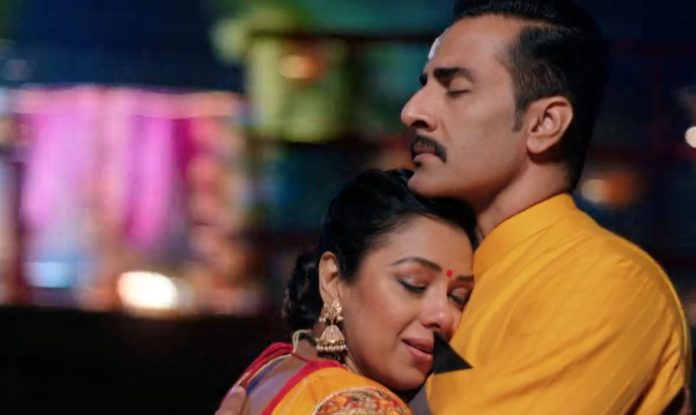 Anupama Written Update Rakhi dirty game 18 January Anupama loves the sight of the flying lanterns in the sky. Vanraj tells that he wants to tell her what he wished for. He tells that he has asked life for a second chance. He asks a second chance from Anupama. He has seen her trying to fix every broken thing. He is inspired from her. He wants to fix their relationship. He tells her that he wants to regain her faith. She doesn’t think anything makes a difference now. He apologizes to her for his misdeeds. He touches her heart by making an emotional plea. She asks him the reason for the apology.

He asks for a last chance for a new start. He tells that he made many mistakes after his marriage, but he finally wants to love his wife. Anupama is stunned by his clear love confession. He tells that he doesn’t want her forgiveness, but wants to know his stature in her heart. Anupama tells him that she still holds the same respect and feelings for him. She breaks her silence. She tells him that her love can’t end by his deceive.

She clears that she didn’t wish to see his face, but her anger ended on the day of his accident. He is glad to know if she still cares for him. She tells that she has forgiven him. He is grateful to her. They have a moment of joyful union. Anupama asks him if he will break her trust. Vanraj promises to never break her trust. The happy union is just a part of Vanraj’s dream. Vanraj wishes that his dream comes true. He really wants a chance to unite with Anupama. He realizes that Kavya was right, he has fallen in love for Anupama.

Kavya feels Vanraj didn’t even call her to ask her welfare. Vanraj decides to tell his feelings to Anupama. He finds Anupama taking care of the entire family. He meets her and tries to convey his feelings. Samar reminds Anupama that she has to go to school. Leela tells that she has a right to taunt Anupama and Kinjal. Anupama defends Kinjal. Samar tells that they will get late if she has to go by auto. Vanraj offers his car to drop Anupama to the school.

On the other hand, Nandini asks Kavya to remember if Vanraj is worth the wait. She tells that if he can cheat Anupama, then he can cheat her as well. She wants Kavya to take control of her life. Anupama explains the work to Kinjal. Leela complains about the washing machine. Anupama tells that she will give the machine for repair. Rakhi learns about the new problem in Shah family. She wants to add more troubles in the dirty laundry mess. Kinjal manages her work. She asks Paritosh to assist her. Samar gifts a book to Nandini.

He tells her that he wants her to forget her past and think of a happy future. He doesn’t want her to tolerate any pain. She asks the reason for his weird behavior. Anupama prepares to wash the clothes by hand. Rakhi meets Anupama. Anupama finds her smiling and knows that she is up to something. Rakhi brings a pleasant gift to Anupama. She gifts a washing machine. Anupama thanks her, but refuses for the gift. Anupama is surprised when Vanraj supports her and defends his wife. He tells that he is alive to take care of his wife’s needs. Kavya learns that Vanraj is getting close to Anupama. She gets disappointed with him.

Reviewed Rating for this particular episode Anupama Written Update Rakhi dirty game 18 January: 2/5 This rating is solely based on the opinion of the writer. You may post your own take on the show in the comment section below.