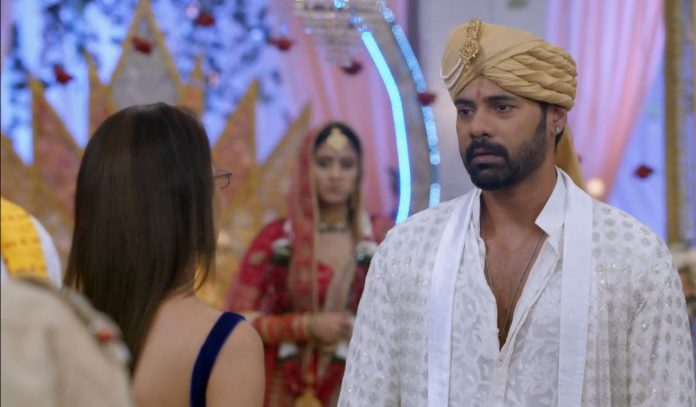 Kumkum Bhagya 19th January 2021 Written Update Pragya havoc twists Pragya gets the police to stop Abhi and Meera’s marriage. She tells the police that Aaliya and Meera know about Abhi’s marriage and daughters. She doesn’t want the marriage to happen. Baljeet and Sarita feel their prayer has got fulfilled. Baljeet is very happy. Inspector tells that she will arrest Aaliya and Meera to get a married man marry again, by going against the will of his first wife. Pragya tells Aaliya that she will oust her now with the rights of being Abhi’s wife.

She tells that she has an evidence against Pragya. Things get complicated with Abhi and Pragya’s argument. Meanwhile, Prachi asks Shahana why did she get her to help Palak, knowing Ranbir is also here. Shahana tells that Palak pleaded for help and they had to come. Prachi agrees to help Palak. Prachi doesn’t know if Rhea has stopped Abhi and Meera’s marriage. She calls Rhea. Servant gets Rhea’s phone. Sarita is also at the same temple as Prachi. Servant looks for Rhea.

He learns that she went to the storeroom. Aaliya shockingly gets Abhi and Pragya’s divorce papers, which proves that Pragya isn’t his wife. Pragya tells that she didn’t divorce Abhi. She is shocked to know about her signed divorce papers. Aaliya has played this game. Abhi is also moved to know that his divorce has been conspired 15 years back. Aaliya tells that Abhi and Pragya’s marriage has broken 15 years back. She asks Abhi and Pragya to check the papers. They both are shocked to see their signatures on the papers.

They get speechless by the unexpected twist in the marriage. Abhi asks Pragya if she had signed the papers. Pragya tells that its fake signatures. Aaliya reminds her the way when they met outside the police station in Hoshiarpur when Prachi went missing. She had threatened Pragya about Prachi by planning a kidnapping. Aaliya had kidnapped Prachi just to get her signs on the papers. She lies to Pragya that its property papers so that Pragya doesn’t claim Abhi’s property. She takes Pragya’s signs.

Pragya gets glad when Aaliya returns Prachi to her. She didn’t know that it was divorce papers on which she had signed. Aaliya wanted to make sure that Pragya never challenges her. Pragya tells them that Aaliya lied about the property papers and took her signs. Aaliya tells that she had got Pragya’s sign on property papers first and then the divorce papers. She lies to Abhi. She tells that he had asked her to get Pragya’s signs on the divorce papers. Aaliya cooks up a story to frame Pragya. She makes Pragya fall in Abhi’s sight.

Abhi asks her if she had signed on divorce papers. Aaliya tells that Pragya is doing everything for the sake of money, she is taking revenge on Abhi. Pragya wants to see faith in Abhi’s eyes for herself. Abhi thinks she had broken their marriage long time back. He doesn’t want to commit any mistake again. He tells that he was wrong to think of their bond and love. Aaliya tells that Pragya doesn’t love him. She humiliates Pragya. Abhi tells that the police can’t stop the legal marriage now. He asks the pandit not to stop now and conduct the rituals. Pragya tells that the papers are fake, Aaliya is lying. She tries hard to stop the marriage.

She goes mad in rage and ruins the mandap. The police doesn’t help Pragya. Pragya tells that she is still Abhi’s wife. Abhi tells that he will marry Meera at the temple. Servant finds Rhea and helps her out. Rhea wants to show Aaliya’s truth to the family to fail her conspiracy. She is ready to ruin Aaliya to stop Abhi and Meera’s marriage. Aryan finds a pandit for Prachi and Ranbir’s marriage. Aaliya asks Raj not to tell anything to Baljeet. She wants him to lie to Baljeet that Abhi is not marrying Meera. Pragya tells that she will not let the marriage happen. Abhi challenges her. He loves her a lot.

Reviewed Rating for this particular episode Kumkum Bhagya 19th January 2021 Written Update Pragya havoc twists: 2/5 This rating is solely based on the opinion of the writer. You may post your own take on the show in the comment section below.