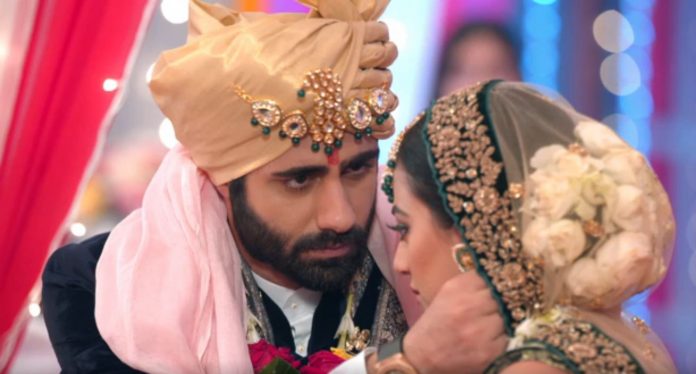 Ishq Mein Marjawan 2 26th January 2021 Written Update Riddhima backs out Kabir helps out Riddhima when she is stuck in her room with the handcuffs. She has called Kabir to come to her rescue. Kabir reaches her after Vansh makes a leave from the house. He removes the handcuffs and takes Riddhima to the storeroom where he had kept the officer a hostage. Kabir continues to torture the officer. He starts his level of tortures to break down the officer. He tells Riddhima that he works in police and he knows to make anyone speak out the truth.

The officer is also threatened by Vansh. He doesn’t want to tell the truth to Kabir, knowing that Vansh will kill him and his family if he goes against. Kabir tells Riddhima that she can’t disappear from the marriage, she has to go back to her marriage and stay there until he finds out the truth. She doesn’t want to go until she hears the truth from the officer herself. Kabir insists her to go away before Vansh suspects her. He tells Riddhima that he will find the truth soon.

Riddhima goes back to her room, when Vansh meets her and makes her ready for the wedding with all his lovely gesture. Vansh and Riddhima arrive for their marriage. The family graces their occasion. They get married by performing all the rituals, while Kabir tries hard to get the truth out of the officer’s mouth. The officer finally gives up to Kabir’s torture. He tells Kabir that Vansh had actually killed a couple in an accident, for which he was sent to the juvenile home. He doesn’t know the details of the couple. He can’t confirm if the couple was related to Riddhima.

Kabir suspects that its Riddhima’s parents who got killed by Vansh. He wants Riddhima to know the truth. He rushes to Riddhima to tell her Vansh’s crime. He succeeds in passing the message to Riddhima, who completes the marriage rituals with Vansh. Riddhima in in tears when she fears that she has married her parents’ murderer. She doesn’t want to know the truth that Vansh killed her parents. Vansh thinks she didn’t uncover the truth and lost the challenge. He wants her to stop chasing the truth from now.

Kabir is sure that this little truth will break down Vansh and Riddhima’s relationship and love. He wants Riddhima to just leave Vansh and punish him for the crime. He wants to see Vansh’s destruction. Riddhima loses out to her emotions. She backs out from her relationship with Vansh. Will Kabir win in his evil plans of separating them by creating a misunderstanding? Keep reading.

Reviewed Rating for this particular episode Ishq Mein Marjawan 2 26th January 2021 Written Update Riddhima backs out: 2/5 This rating is solely based on the opinion of the writer. You may post your own take on the show in the comment section below.