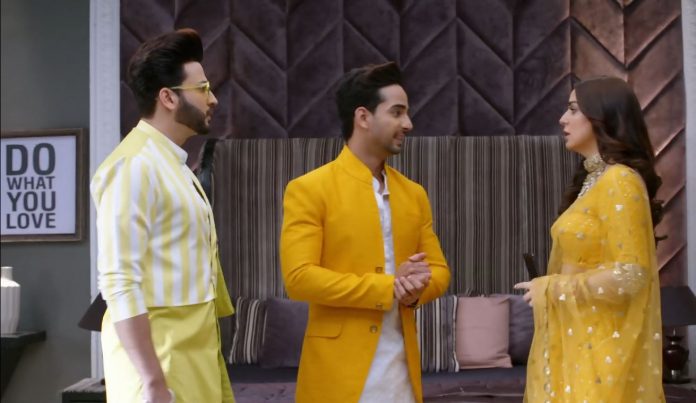 Kundali Bhagya 28th January 2021 Written Update Haldi drama Mahira takes the haldi to the Kuldevi temple. Preeta wishes that she gets evidences against Akshay and exposes him before the haldi comes. Kareena tells Rakhi that Mahira will be coming any time with the haldi. Preeta asks Sameer to arrange the projector. Karan hopes that Preeta doesn’t create any issue in the function. Karan tells Kritika that he will miss her a lot. Akshay tells that Karan can’t live without his lovely sister, that’s why he is trying to stop the marriage. He tells that he is blessed to get Kritika.

Akshay tells that he wanted to meet her in private. He confesses love to her. He tells that he doesn’t think she loves him more than she loves Preeta. He tells that Preeta is against her. Sherlyn tries to spy on them. Akshay tells Kritika that Preeta doesn’t want their marriage to happen. He threatens her about their relation. He tells her that they will not have any relation if Preeta keeps interfering. Kritika gets stressed. He feels insulted because of Preeta. He asks her to keep her friendship if she wants.

Akshay meets Preeta and challenges her to expose his truth. He lectures her on her manners. He tells that Shrishti and she acted bad in his home and he has taken the revenge on them already. She replies that she didn’t like what he did with Shrishti. She hates his decent pretence. She knows that he isn’t a nice guy. He tells her that he is getting much peace, he will not act in front of her. He tells her that everything is happening as per his plan. He asks her to see where she stands now. He is glad that he has put her in the mess.

Preeta tells Akshay that she will not step back as he is predicting. She tells that she will attempt to expose him and will succeed as well. She warns Akshay to leave before he loses his respect. She tells that he is playing the game well, but she will end his game. She adds that she will ruin his plans of duping Luthras for money. Akshay accepts her challenge. He finds her overconfident. Karan questions Akshay about the challenge. Sameer looks for Preeta to tell about his arrangements. Sameer hears some guests complaining about Akshay.

Sherlyn warns Kritika about Preeta and her friendship. She doesn’t want Preeta to spoil Kritika and Akshay’s relation. She asks Kritika to save her marriage. Kritika also gets into Sherlyn’s words. Akshay gets a shocking news that Preeta got an evidence against him. He gets panicking. Karan finds Akshay panicking. He suspects Akshay. Will Preeta succeed in exposing Akshay by displaying Ruchika and his pictures on the projector during the Haldi ceremony? What huge drama are you expecting in the next episode? Comment below. Keep reading for more updates.

Preeta wants Sameer to be alert. She tells him about Akshay’s challenge. She tells that she will meet Shrishti and try to present the evidences against Akshay at the earliest. Sherlyn tells Kritika that Kareena is right, Kritika should save her marriage. She wants everyone to praise her. Preeta and Shrishti get the evidence ready. Preeta checks the pictures.

She tells Shrishti that she will not spare Akshay, she will expose his truth, his affair with Ruchika. Shrishti tells that Ruchika doesn’t even know about it, Akshay will be getting exposed and kicked out of the Luthra mansion. Ruchika overhears their conversation. Akshay feels he has fooled Luthra family well. He knows that its tough to handle Karan. He doesn’t want Karan to suspect him. Kritika is happy when her haldi function smoothly goes on.

Reviewed Rating for this particular episode Kundali Bhagya 28th January 2021 Written Update Haldi drama: 2/5 This rating is solely based on the opinion of the writer. You may post your own take on the show in the comment section below.