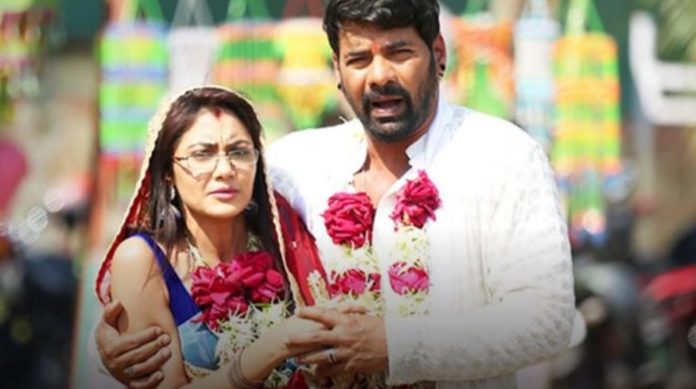 Kumkum Bhagya 29th January 2021 Written Update Abhigya to die Rhea wants to marry Ranbir at the earliest. Ranbir tells that there are no elders to bless them, they aren’t any eloping lovers. Ranbir makes Rhea hide from Sarita and Baljeet. Sarita tells that they shall go and see the newly weds Abhi and Pragya. Ranbir lets Sarita and Baljeet go away without seeing them, he asks Rhea to go home. Rhea wants to know what is he doing. He tells that if Baljeet saw them and got to know about the marriage, then it would be a problem.

Rhea tells Ranbir that Abhi and Pragya got married. She wants to marry Ranbir. Aryan tells that Ranbir is already marrying. Jai covers up for the stupid comment. Pandit gets confused that Ranbir is caught between two girls, Prachi and Rhea. Rhea tells that she will get ready for the marriage. Ranbir is helpless when he can’t send Rhea home. Rhea goes to the bride’s room to get ready. Abhi tells the old couple that someone is trying to kill them.

The couple asks them if they have eloped to marry, if their family is after them. Pragya tells that their marriage has happened in peace, the shooter is following them since the accident. The lady asks them to stay back, but the man is worried for their own lives. He doesn’t want to keep Abhi and Pragya home. The lady tries to convince her husband to help Abhi and Pragya. Aaliya drinks to get rid of her sorrow. Tai ji tells Aaliya that she has done good to throw out Meera, but Pragya will come back and become a hitler again.

She tells that Pragya will come back and not spare them, she has won this time because of Abhi’s support. Rhea is much shocked to see Prachi and Shahana. Palak tries to cover up. She tells that Prachi isn’t there. Shahana takes Prachi with her. The lady Ratna wants Abhi and Pragya to stay as their children. The man doesn’t want any threat on them. The henchmen look for Abhi and Pragya and focus. The old couple regret that their son has left them and is ashamed of them. They see their son in Abhi. Ratna tells that they have to help Abhi, even if they can’t have faith so soon. The henchmen arrive at the same house to ask about Abhi and Pragya.

The man fears the worse. He tells Ratna that they may also die while saving Abhi. Ranbir plans to marry Prachi by showing the accidental rituals happening. Jai tells that Aryan and Shahana are in a relation. Aryan asks him not to cross limits. Ranbir wants to make Rhea leave, so that he can marry Prachi. He knows that Rhea would leave only if its about Abhi. He thinks to lie that Abhi is in a problem and needs Rhea’s help.

Ranbir stops Jai and Aryan from fighting. He asks them to just call Rhea and tell her that Ranbir is worried for Abhi. He tells that its a fool proof plan, Rhea will be going to meet Abhi. Abhi tells Pragya that they will go when the old couple isn’t willing to keep them. The old couple lets them stay so that Pragya’s Kumkum is intact. Abhi tells that wives always win over the husbands. The man asks them how did they come here.

Abhi tells that they have come a horse, they were escaping from the goons’ sight. Pragya tells that they have left the horse far away from the village. The man asks them to stay protected from the goons who want to kill them. Pragya thanks them for the help. The man tells that he wants them safe. His wife Ratna tells that Abhi is cheerful. Abhi adds that he has become happy go lucky because of Pragya. Ranbir fakes a call about Abhi. Rhea wants to know what happened to Abhi. Aryan asks Ranbir to tell her, she has a right to know it.

Ranbir tells Rhea that Abhi is in a big problem, many goons are after his life. He reminds her that maybe the goons will enter the house and harm him. Rhea asks Ranbir to come along. Ranbir tells Rhea that he will come in his car. He sends Rhea away. He happily dances that his plan worked. Prachi finds Ranbir’s madness. She is confused. The goons look out for Abhi and Pragya.

Prachi questions the reason of joy from Ranbir. Ranbir tells her that she is the reason for his joy. He tells her that he has sent Rhea, now nobody can stop their marriage. Pandit asks Ranbir to marry as soon as possible. Ranbir asks Prachi to sit in the marriage mandap. Prachi wants to know what’s happening. Ranbir asks Palak to sit in the mandap. Aryan tells that he will get beaten up if his marriage happens with Palak. Ranbir assures that Purab and Aaliya won’t know about him. Will Abhi and Pragya succeed in saving their lives? The drama seems to be dragging for more episodes. Do you enjoy the ongoing drama? Comment below and keep reading.

Reviewed Rating for this particular episode Kumkum Bhagya 29th January 2021 Written Update Abhigya to die: 2/5 This rating is solely based on the opinion of the writer. You may post your own take on the show in the comment section below.