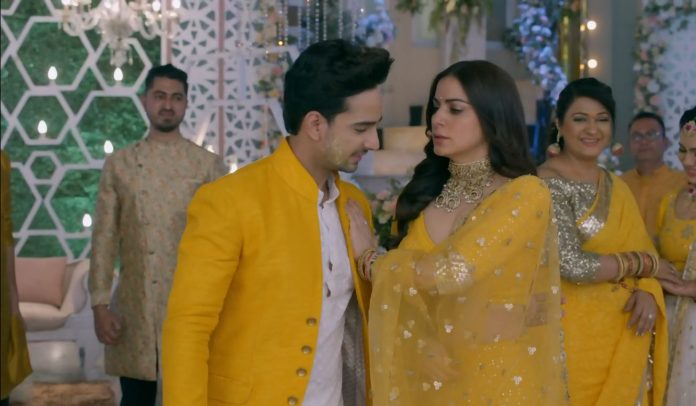 Kundali Bhagya 1st February 2021 Written Update Result time Preeta challenges Akshay. She tells the guests that Akshay isn’t like he appears, he is completely the opposite of what they think about him. She asks them to see Akshay’s reality themselves. Preeta’s words give a warning to Akshay. Preeta tells them about the pictures she is carrying as a surprise for Akshay. She asks the technician to play the pictures on the projector. She tells them that every picture has a story behind it. She wants to bring out all the secrets out.

Akshay gets stressed. Sameer tells Shrishti that they are going to win now. Shrishti tells that Akshay will be bashed up after he gets exposed. Sameer finds her unique. He tells that they can’t miss any drama. Preeta asks Akshay to confess anything if he wants. Akshay tries to stay calm. He tells Preeta that he has nothing to confess. Preeta sounds confident this time. Preeta, Sameer and Shrishti are shocked to see the pendrive changed. They don’t see any pictures of Ruchika. Akshay had made Babu swap the evidences.

Preeta fails to bring his true colours out. She loses her cool. The family likes the happy moments of the functions. Akshay tells them the story behind the happy moments. Preeta is herself shocked that she has failed to expose him. She doesn’t lose hope and attempts again. She learns that the pendrive has been changed. Preeta checks her phone. She tells Shrishti that there are no pictures in her phone.

Sameer knows that Akshay has played a game again. Preeta and Shrishti stay helpless. Akshay expresses his love for Kritika. He acts friendly with Preeta. Sarla learns that Shrishti isn’t at home. She wants Shrishti to be obedient. She is helpless to cage Shrishti in the room from now. She is upset that Shrishti left even when she stopped her. Akshay thanks Preeta for proving his character clean and making him lovable. Rakhi tells that Preeta has won their hearts. Sherlyn and Mahira are happy to see Preeta’s another defeat.

Sarla calls up Shrishti and asks her to come home soon. She tells that Janki fell down and needs help. Shrishti goes home in worry. Sarla knows that Shrishti will return soon for Janki’s sake. Preeta wonders when did the pictures change. She knows that Akshay has done it. Poor Preeta loses again, even though she has turned really brave to attempt to expose Akshay’s truth.

She doesn’t lose courage and wants to stop the marriage at any cost. The truth doesn’t come out. Preeta is determined to prove Akshay wrong in front of the Luthra family and save Kritika’s future. Preeta’s struggle becomes interesting to watch because of her all new bold side. What do you think about the track? At least, we aren’t getting to see a sobbing, speechless, mute and helpless Preeta like before. Keep reading.

Reviewed Rating for Kundali Bhagya 1st February 2021 Written Update Result time: 2/5 This rating is solely based on the opinion of the writer. You may post your own take on the show in the comment section below.