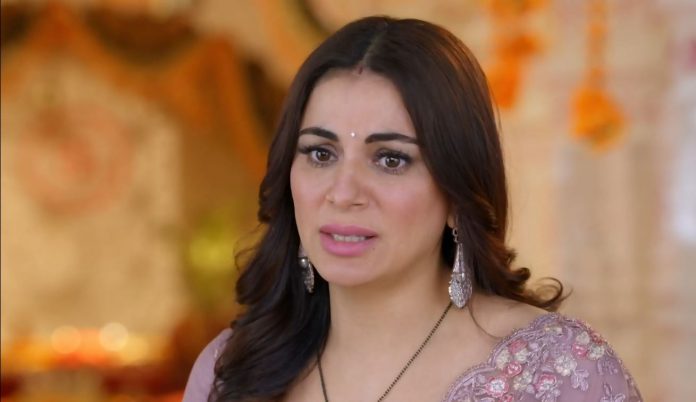 Kundali Bhagya 3rd February 2021 Written Update Preeta at stake Kritika gets pleased when Karan and Preeta bring Mahesh for the rituals. Mahesh is still in coma, but they make him perform the rituals by blessing Kritika. Akshay calls up Megha for a meet. Megha agrees to meet him. Akshay isn’t scared of anyone now. He knows that Preeta can never expose his truth. Kritika and family reach the temple for the puja. Preeta makes a special prayer for Kritika’s life. She doesn’t want Kritika’s life to get ruined. Sherlyn hates Preeta.

She is happy to get the responsibility of Kritika’s marriage. She wants to become the favorite of the family. She aims to snatch Preeta’s supporters. She tells that Preeta will fall alone when Kritika goes away from the family. Preeta wishes that the day becomes a good one. She wants time to expose Akshay’s truth. Her intentions are good. She just wants to save Kritika from a wrong relation. Sameer spots Akshay with Megha. He realizes that Akshay is with Megha, not Ruchika. He wants to inform Preeta about Akshay.

Sameer tells Preeta that Akshay has done wrong with Kritika, he is cheating all of them. He informs that Akshay is with Megha. Preeta asks Sameer to keep an eye on Akshay. Sherlyn tries to hear Preeta’s conversation. Preeta warns her against spying on her. Sameer loses his cool on finding Akshay and Megha entering a hotel room. He tries to get through the hotel staff. He learns the room number. He goes to get a concrete evidence against Akshay.

Sameer informs Preeta that he got to know the room number. Preeta gets Shrishti’s call. She tells Shrishti about Akshay and Megha’s affair. She reveals that both of them are together. Shrishti tells that Akshay had done a drama to frame them in the trap. Preeta tells that Akshay knew Megha already and laid the trap for them to prove them as liars. She tells Shrishti that Akshay is very clever, but she will catch him red-handed. She wants to take Kritika, Rakhi and Kareena to the hotel room to expose his truth. Shrishti likes her plan.

She asks Preeta to take everyone and show Akshay’s true colours. Sherlyn wants to know who is called Preeta so often. Shrishti calls up Sameer to wish him all the best. She tells him that Preeta had shared the plan with her. She also wants to head to the hotel and expose Akshay’s truth. She wants to support her sister in the big plan. Preeta stops everyone from going home. She asks them to just spare an hour. Kritika asks Preeta if its a surprise for her.

Preeta asks them to trust her and not misunderstand her. She wants to tell them about Akshay. Rakhi and Kareena ask her what is she planning to do. Preeta takes the risk. She tells them that she will expose Akshay’s truth, he is a wrong man. Kareena asks her what has happened to her. Sherlyn asks Preeta to stop it. Preeta tells that Akshay had blamed Shrishti for no reason. Kareena wants Preeta to go to her Maayka if she can’t see Kritika happily getting married. Preeta reveals to them that Akshay is with Megha in a hotel room, he knew her and plotted that fake molestation scene just to fool others.

She tells that Akshay planned everything to prove her wrong in front of the family. Kareena asks why does she always blame Akshay. Preeta tells her that Kritika is like her sister, she doesn’t want her life to get ruined. She wants to save Kritika’s future. Kareena doesn’t listen to them. Kritika tells Kareena that she will verify her trust, she has an hour to spare for Preeta’s sake, she also wants to see if Akshay is a wrong person. She tells that she trusts Akshay, but she trusts Preeta too.

Kritika tells that she can’t marry by keeping the doubt on her mind. Kareena asks her if she wants to break the marriage. Rakhi tells them that they will go with Preeta once and find the truth. Kareena knows that Rakhi trusts Preeta a lot. She agrees to go on Rakhi’s word. She asks Rakhi to punish Preeta if she is wrong. Preeta is ready to happily accept any punishment if she is wrong. Kareeena threatens Preeta. Preeta takes the family to the hotel room to confront Akshay about Megha. Akshay hides Megha and acts innocent. Will Preeta be able to prove Akshay wrong this time? Comment your opinion and keep reading.

Reviewed Rating for Kundali Bhagya 3rd February 2021 Written Update Preeta at stake: 5/5 This rating is solely based on the opinion of the writer. You may post your own take on the show in the comment section below.