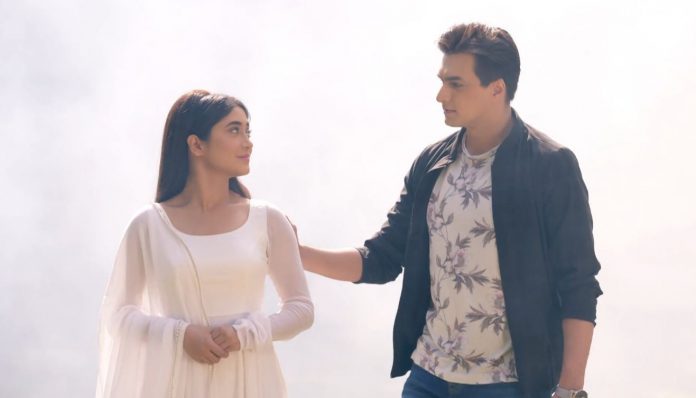 Yeh Rishta Naira soul meet Upcoming twists Star Plus Kartik and Sirat have a direct talk about their lives. Kartik is awestruck to see her face, which resembles Naira so much. Sirat is angered by his constant stares. She wants to punch his face and teach him a lesson. Kartik doesn’t want her to get mistaken of his feelings which are visible on his face. Kartik faints down when she helps him on her Maudi’s insistence.

Sirat learns that he is the same guy who dropped Maudi home. She tells that she can’t thank Kartik enough for helping Maudi, but that doesn’t mean that she will excuse him for entering her house without permission. She wants to know the reason for his coming. Manish is tensed for Kartik just like Kairav. Rhea wants Kartik to return home and see her efforts in handling his daughter. Suwarna opposes Kartik and Rhea’s alliance, while Surekha is in its favor.

Surekha gets into an argument with Suwarna when the latter strongly takes a stand for Kartik’s love for Naira. Suwarna knows that Kartik can never forget Naira, he can live with her memories all his life. She doesn’t want Surekha to pressurize Kartik. Kartik slips into the dreaming world when he connects with Naira’s soul, appearing bright again in the plain white clothes. Kartik wants to be with her.

He feels that Naira can’t be Sirat, due to their contrast personalities. Kartik turns conscious only to get interrogated by Sirat. She doesn’t know him. She doesn’t know the reason that he came to her house searching for her. Kartik wants to leave at the earliest, but the hit on his head which she made in anger, leaves him in a weak state. He isn’t able to get to his complete senses. Maudi asks him to take some rest and then go home. His hope about Naira’s memory loss and survival chances also falls flat when he learns about Sirat’s childhood and life.

He explains his heart that Naira is dead, she left him forever and Sirat can’t be Naira. He doesn’t want any false hopes to come on his mind. Sirat is depressed that Kairav’s mistake has got her disqualified in the match. She wanted to go to Udaipur for the match, but failed again due to Maudi’s health.

Kartik avoids her questions. He seeks her help to get freshen up at her home. Sirat doesn’t let him go away without answering her questions. He finally reveals that he got to know about her through Kairav, his son. She vents anger on Kairav. She asks him to control his son, because of whom her future has been in trouble. He apologizes to her for Kairav’s mistake. She asks him about Kairav’s mum. Kartik fails to answer her about Naira.

They have a cute scene where they get to know more about each other. Sirat falls in trouble because of the accusations from Sheela and Mukesh. Mukesh stains her character by blaming her of eloping with her lover. Sirat clears to Maudi that she didn’t run away with anyone. She actually wanted to pursue her dreams. Mukesh talks nonsense about Sirat, which somewhere angers Kartik, even though Kartik isn’t related to her. Kartik comes to defend her when Mukesh hurts her deliberately. Kartik takes a strong stand for her.

Reviewed Rating for Yeh Rishta Naira soul meet Upcoming twists Star Plus: 5/5 This rating is solely based on the opinion of the writer. You may post your own take on the show in the comment section below.