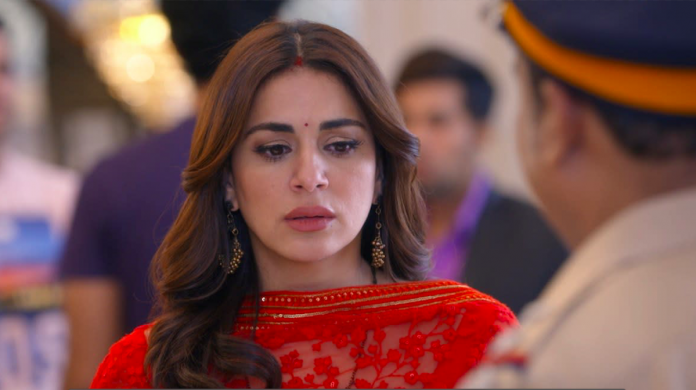 Kundali Bhagya 10th February 2021 Written Update Smashing twist Preeta attempts to expose Akshay, which makes him deny the accusations and break the marriage. Kareena doesn’t even see the pictures and throws it in the fire. She shows her faith on Akshay. Preeta fails to prove Akshay wrong because of Kareena. Kritika and Kareena beg him not to leave. Akshay tells Preeta that she is responsible for Kritika’s marriage breaking. He tells them that the world will blame Kritika to be lacking something that her marriage broke. Karan loses his cool on his mean comments. Kritika breaks down once Akshay the wedding. Preeta stops Akshay for reprimanding him.

She tells him that he should be ashamed that he is leaving the mandap being at fault himself. He tells her that Kritika is broken down, the family will never forget Preeta’s deed and punish her every day. He tells her that she has not defeated him, but she has lost herself. He adds that Kareena will hate him more, Kritika will not show faith on her and even Karan will rebuke her at all times. He congratulates her for losing.

Preeta tells him that she will not think of her failure in front of Kritika’s future. She wanted to save Kritika from a cheat. She tells him that she has saved Kritika’s life from ruining, she doesn’t care for anything, he has lost and its just his frustration that’s speaking so. She returns to the family. Kareena vents her rage on Preeta for ruining her daughter’s life. She tells Preeta that she should also leave the house. Preeta wants Kareena to listen to her once. Kareena asks Kritika to see Preeta’s mean act. She rebukes Preeta for ruining their happiness. Preeta tells them that Akshay is a cheap guy.

Kritika tells that she would have decided about him. She asks Preeta why didn’t she wait for her decision and decided everything herself. Karan also thinks Preeta has done wrong this time. Bani also blames Preeta, who asks them to believe her once. Sarla tells them that nobody will believe her, Akshay is not a suitable guy for Kritika, but the family doesn’t think so.

She asks Preeta to be quiet if the family doesn’t understand and want to ruin Kritika’s life. Kareena asks her to stop the drama. Sarla tells them that Preeta just wanted to show them the truth. She asks them to trust Preeta instead Akshay. She tells that Preeta is also a member of Luthra family. Sherlyn asks Sarla to stop it. Kareena tells that Sherlyn is also a bahu of the house.

Karan stops Sarla and Kareena from taking the fight to the loudest level. He asks them to know that the guests are watching the drama. Sarla tells that nobody believes Preeta even if they are saying the truth. She tells that Preeta always got accused for doing good to them. Kareena tells that Kritika isn’t happy, Kritika is still suffering. Sarla tells her that Akshay was a wrong man, Kritika will find a nice guy who will keep her happy. She wants them to know that she wishes good for Kritika as well, as she wishes for Preeta and Shrishti.

Kareena asks Sarla not to compare Preeta with Kritika. She tells them that Preeta should have left the house, then Kritika would have got married. She argues with Karan and Rakhi, who support Preeta. Kareena wants Preeta ousted, but Karan takes a stand for her. He tells Kareena that he will also leave the house if she ousts his wife. Sarla tells Kareena that she will take her daughter along from the family where nobody believes her. She doesn’t listen to Karan. She tells them that she told Preeta not to fight for Kritika. She tells that Preeta couldn’t save her future in the family, how could she save Kritika’s future.

She asks Karan to trust Preeta without asking for any reason. Karan tells that he has no reason to trust her. Sarla tells that Preeta doesn’t need to keep up any relation if Karan doesn’t trust her. She drags Preeta and Shrishti with her. She doesn’t want Luthras to blame them further. Sarla brings Preeta and Shrishti home. She shares the entire incident with Janki. They regret a lot that the matter got serious and affected Karan and Preeta’s marriage. Karan and Preeta miss each other. What will happen next? Keep reading.

Reviewed Rating for Kundali Bhagya 10th February 2021 Written Update Smashing twist: 5/5 This rating is solely based on the opinion of the writer. You may post your own take on the show in the comment section below.