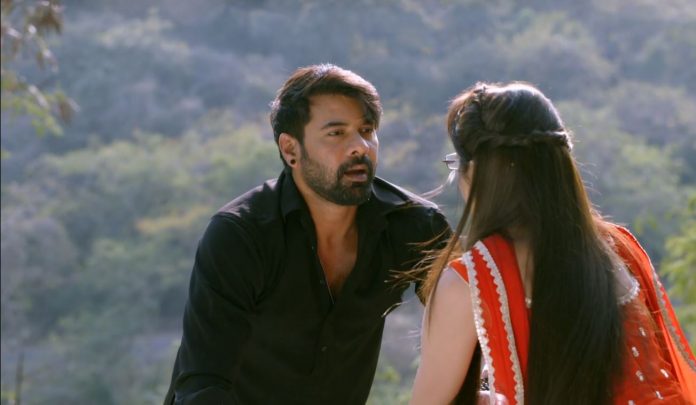 Kumkum Bhagya 12th February 2021 Written Update Wild chase Abhi and Pragya have a cute fight on their way then they realize that the shooter Bittu is following them. Baljeet, Sarita and Purab pray for Abhi and Pragya’s safety. The puja stops midway when a fire spreads around. Purab ceases the fire. Aaliya stops the puja from proceeding by pouring water in the havan fire pot. The pandit tells Baljeet that its a big bad omen, Pragya may suffer in her life.

They warn that Abhi and Pragya may die. Aaliya wishes that the pandit’s words get true and Pragya dies. She wants Abhi to return home alone. Pragya tries to gather some stones to face the killer. She tells Abhi that she will fight with Bittu when he comes to them. Abhi asks her not to become funny. He tells that he becomes a warrior in such situations. She asks him to drive the car than boasting a lot. She doesn’t want him to underestimate her.

She tells him that Prachi would be much worried for her. Abhi tells that he will love Prachi and fill up her dad’s place. Pragya tells that Ranbir had proposed Prachi, she has accepted their relation, they love each other. Abhi realizes that Ranbir loves Prachi. He wants to get Ranbir and Prachi married. He tells that he thought that Ranbir loves Rhea, he was getting them married, he was fixing their alliance. She asks him if Ranbir told him that he loves Rhea. Abhi tries to recall. He tells about the confusion. He asks her if Prachi told her that she loves Ranbir.

Pragya tells that she asked Prachi, but she didn’t confess, she was happy about the alliance. Abhi tells that Rhea told him that she loves Ranbir. Pragya thinks if Prachi doesn’t love Ranbir. She wonders if she should get Rhea married to Ranbir. He asks her to forget about Rhea and Prachi. He tells that they should think about their lives. Pragya tells him that she will hit stones at Bittu’s car. She shows her talent to Abhi. Abhi laughs at her foolish bravery. He jokes on her bad aim. Pragya tells him that her aim is right. Bittu angrily shoots at their car as an answer.

Ashok informs Bittu that Snake has angrily shot Varsha. Ashok’s mum asks Bittu to kill Pragya to take revenge for Varsha’s death. She tells that she can’t see Ashok’s sorrow. Bittu swears to kill Abhi and Pragya. He wants to kill Snake after killing Abhi and Pragya. Purab tries to call the inspector. Gupta calls him to know if Abhi and Pragya reached home. Purab tells that they are at some hotel. Gupta asks them to find out the hotel and go there to rescue them. He informs that contract killers are after them.

Purab is much scared to think of the threat. He is much shocked. He worries that Abhi left his cards at home, there is no way to track them. Baljeet wants to accompany him in the search. Abhi and Pragya’s non-stop banter go on. Abhi tells that she would have got him killed by her poor driving. She gets hurt by his bad remark. He tells her that she would have invited a deadly accident. He apologizes to her. She scolds him for hurting her heart.

He convinces her with love. He doesn’t want to get angry on her. He just wants to romance her. They face the killers again. Bittu is raged up in madness. Abhi flees from the scene. He doesn’t understand when will they reach the destination. Bittu follows their car to hit them. Abhi and Pragya fear of falling down the cliff. They hold hands and promise to live and die together.

Reviewed Rating for Kumkum Bhagya 12th February 2021 Written Update Wild chase: 4/5 This rating is solely based on the opinion of the writer. You may post your own take on the show in the comment section below.