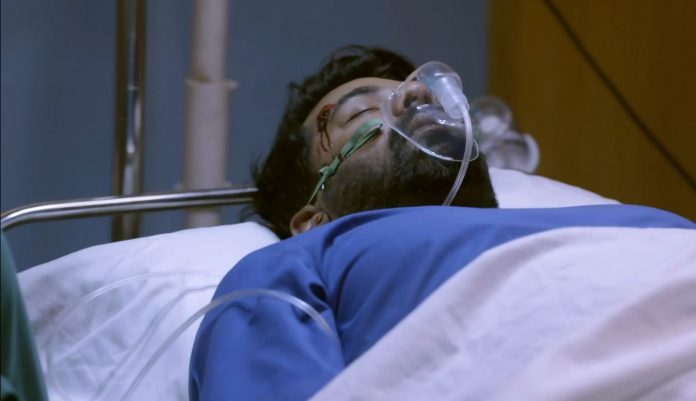 Kumkum Bhagya 22nd February 2021 Update Abhi life verdict Pragya breaks down seeing Abhi’s critical condition. Prachi feels strange that Pragya didn’t call her. Prachi calls Sarita to know about Pragya. Prachi tells that she is scared for Abhi and Pragya, Purab had told her that they are fine, but she is feeling really restless. Sarita tells her that Abhi and Pragya would be fine. Sarita cries on speaking to her. Prachi insists her to share the problem. Sarita reveals that Abhi and Pragya’s lives are in danger, someone wants to kill them. Prachi’s fear turns out to be true.

She tells Shahana that she will save them, she will not let anything happen to them. Pragya reaches the hospital. The man helps her on time. She can’t thank him enough. Pragya asks the doctor to attend Abhi. She rushes him inside. She realizes that the accident patients are given a priority. She calls Purab by borrowing a phone. She asks Purab to come at the hospital, Abhi is shot. Purab can’t hear her properly. He tells her that he is finding her in the jungle area. He doesn’t get to know that Abhi is shot.

Bittu kidnaps her, and doesn’t see Abhi there. Purab tells Aaliya that Pragya is in the city hospital. Aaliya wonders if its an accident. Purab asks her to sit in the car. Gupta asks them to go to the hospital. Sarita informs Prachi that Abhi and Pragya are safe. She asks Prachi to not come at the hospital. She reveals that Pragya had called Purab to inform him. Prachi wants to see her parents at the hospital. She doesn’t want to listen to anyone. Purab tells that Prachi is stubborn like Abhi. He asks Aaliya to send the car for Prachi.

Aaliya informs Rhea about Abhi, he is at the hospital, Pragya is also with him. Rhea wants to rush and see Abhi first. Ranbir also learns the news and goes with Rhea. Aaliya tells Purab that she has informed Rhea. Rhea doesn’t want to inform Prachi. Pragya finds herself kidnapped. She realizes that Abhi was left unattended at the hospital. She wishes that someone got Abhi admitted for treatment. She shouts for help. Bittu meets her.

A doctor finds Abhi in the critical state. He asks the nurse to admit Abhi soon. Rhea drives in tension. Mitali tells her that Pragya is responsible for Abhi’s pain. Purab and Aaliya reach the hospital to find Abhi. Purab yells at the nurse. They don’t get any entry there. Purab loses his control when the hospital staff doesn’t cooperate. Purab goes to make a call. He comes across Abhi, who is left unattended. Purab is shell shocked to see Abhi shot. He can’t believe the sight. He gets into a deep pain by the shattering sight.

Aaliya, Sarita and Baljeet are also shocked to find Abhi shot. Purab rushes Abhi for treatment. He reprimands the staff. Abhi is sent to the OT. Ranbir meets Prachi. He takes her to the hospital. He tells that nothing will happen to Abhi. Doctor tells Purab that he asked the staff to admit Abhi before itself. Purab asks him to save Abhi. He threatens to sue the hospital. Doctor asks him why didn’t he admit the patient.

Purab tells that Pragya got him there. He requests the doctor to just save Abhi. Aaliya is angered that Pragya didn’t admit Abhi and left. Purab senses that Pragya is in trouble. Bittu threatens Pragya. He calls her a selfish woman to run to save her life. She thinks the henchmen don’t know that she took Abhi to the hospital. He angers her. She doesn’t tell him that she didn’t leave Abhi in the jungle.

He tells her that Digvijay will meet her and tell the reason for enmity. She wants to know the reason, but doesn’t want to die. She thinks she needs to go to Abhi right away. Abhi’s condition gets severe when the doctors fail to remove the bullet stuck in his skull. They wait for a senior surgeon for Abhi’s surgery. Rhea meets Abhi and breaks down seeing his state. She gets against Pragya, blaming her for Abhi’s state.

Reviewed Rating for Kumkum Bhagya 22nd February 2021 Update Abhi life verdict: 4/5 This rating is solely based on the opinion of the writer. You may post your own take on the show in the comment section below.