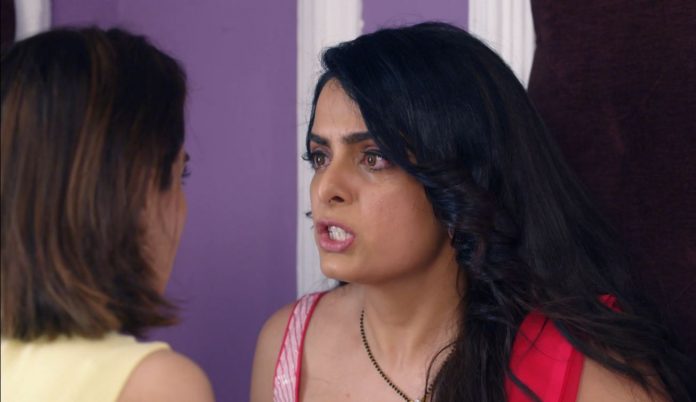 Kritika tells Preeta that Prithvi didn’t force her for the marriage, he had actually saved her life. She tells that their marriage has happened by the destiny. Bani asks her how did she get married to Prithvi. Kritika tells that she got married to Prithvi some days back. Sherlyn feels disturbed. She vents her anger. She can’t believe that Kritika has snatched Prithvi. Mahira asks Sherlyn to calm down. Sherlyn tells that Prithvi loves her, he can’t marry anyone.

She asks Sherlyn to find out the truth. Kritika tells Kareena that her uncle wanted her to attend a fair, so that she feels cheered up. She tells that she had fun in the fair, she went with her cousins and friends and liked the fair. She reveals that she had fallen in trouble when some eve teasers got after her. Kritika wasn’t scared of them, but they didn’t stop irritating her. It was then that Prithvi entered the scene to help her and rescue her from the cheapsters. She remembers that it was a good moment when Prithvi came to save her.

Prithvi tells that he has married Kritika to give respect to their relation. He tells that worse could have happened. Karan asks Prithvi to stop acting. He knows how Prithvi had called Preeta and filled poison in her life. Kritika tells that Prithvi called Preeta to inform about their marriage. Karan asks why didn’t he call him.

Prithvi tells that Karan would have not answered the call, and he has no contacts of others. Kritika tells that Prithvi has married her by sharing his past. She asks Preeta and Karan if they are upset that she had married Prithvi, who was going to marry Preeta. She didn’t wish the elders to get worried for her.

Prithvi consoles Kritika. He knows that Akshay left Kritika in the mandap and disrespected her, just like Preeta left him in the mandap by cheating him. He tells that Karan had snatched his love Preeta, but now he is married to Kritika, they are the best life partners, they understand each other because they both are heartbroken. Kritika tells that she had called uncle to take help when she wasn’t feeling safe, uncle was coming to save her, but he got late. She reveals to them that she was getting molested, but Prithvi came as her savior.

He had bravely fought with the bad men and saved her respect. Prithvi had given an assurance to Kritika that he will not let anything wrong happen with her. She had seen a good person in him and decided to marry him. Kritika didn’t imagine that he will risk his life to save her. In the flashback conversation of Kritika and Prithvi, she admits that she never liked him and wanted Preeta to not marry him, she felt he didn’t deserve Preeta. She asks the reason that he saved her respect.

He tells that he had to save her for sure, maybe he would have not got into the mess, but he couldn’t see her into trouble. She tells him that Akshay left her in the mandap when she loved him and trusted him. He consoles her when she shows gratitude and cries. He asks her to inform the family. He tells her that he will drop her to her uncle’s house. They face the same trouble again when the eve teaser Monu gets his brothers for the fight.

The goons target Prithvi and beat him up. They don’t want any city guy to bash up the local guys. Kritika finds the men threatening Prithvi. Prithvi tells that he is ready to apologize to them to get their lives spared. He gets on his knees to snatch the knife from the man’s hand. He tells them that he isn’t someone to bend down in front of anyone. He takes Kritika with him to flee in time.

Kritika tells Bani that Prithvi saved her. Karan doesn’t accept the marriage. Preeta asks Kritika not to keep the marriage with a wrong man, Prithvi is a criminal. Kritika doesn’t believe Preeta. She wants to give a chance to Prithvi by going against the entire family. Kareena doesn’t like Prithvi much, but decides to support him for Kritika’s sake. She finds Kritika happy with Preeta, and warns Karan and Preeta. Preeta knows that Prithvi has conspired to trap Kritika just to enter Luthra family. What will Preeta do to expose his truth? How will Sherlyn control her rage and insecurity? Keep reading.

Reviewed Rating for Kundali Bhagya 23rd February 2021 Written Update Sherlyn madness: 4/5 This rating is solely based on the opinion of the writer. You may post your own take on the show in the comment section below.