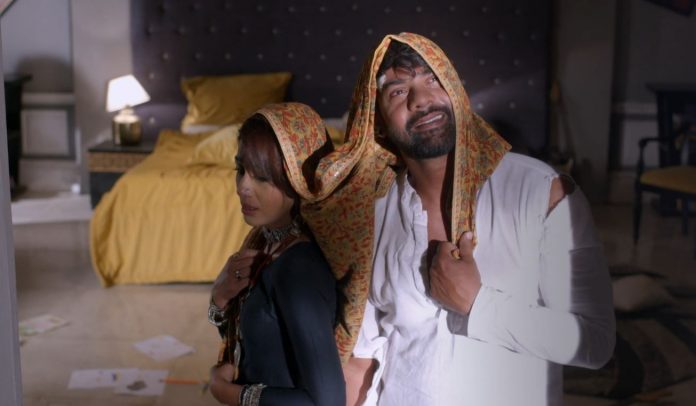 Shahana tells that Prachi had no idea what was Ranbir planning. She adds that Ranbir will come on Prachi’s one call. Rhea asks Prachi to try whatever she wants. She threatens to snatch Prachi’s happiness. Prachi cries that Rhea misunderstands her. She has Shahana on her side. Sarita prays for Pragya to get strength to help Abhi recover. She wishes that Pragya gets Abhi’s support back. She blesses them. Mitali informs Aaliya that Gayatri has gone to meet Abhi. She fears that anything can happen.

Baljeet swears to take Abhi with her and leave the house. Tanu asks Aaliya if Baljeet will really take Abhi. Aaliya tells that Abhi won’t go anywhere, he gets violent, he will try to beat Baljeet as well, he isn’t the same rockstar Abhi. Meanwhile, Pragya tries hard to end Abhi’s fears. She promises to not hit him. Abhi trusts her promise. He comes out of the cupboard. Pragya asks him not to get scared of the stick, which has also become his friend. Abhi gets into some relief. He asks her to play along.

Pragya questions him about his wounds. He doesn’t remember anything. He tells her that he was playing and got hurt. She asks the game. He tells that he was just throwing things around. She realizes that he has no sense at all. She pities his state. She realizes that she needs to really help him out. He cries like a kid that the guitar fell on his feet. Pragya also cries with him. He complains about Aaliya who doesn’t give him any food. Abhi bonds with her. She tells him that they will apply the haldi to his wound to relieve him.

She adds that haldi won’t cause any pain. She does the aid. He feels the pain and bites her hand. She doesn’t react on his bite and does her duty. Abhi realizes that she is really nice. He leaves her. He feels sorry that he had hurt her. He finds her crying. He gets scared that she will go and complain to Aaliya that he had bitten her hand. She tells that she will not tell anything to Aaliya. Pragya cries when he runs back to hide in his cupboard. Mitali asks Pragya if Abhi had bitten her hand again.

She doesn’t want Gayatri to leave the job. Pragya tells that she will not leave her job. She asks Mitali to allow her to take Abhi to dine with everyone. Mitali asks Gayatri how can she guarantee that he will not hurt anyone. Pragya tells that Abhi will feel happy on wearing new clothes and not react in anger. Mitali asks her not to invite problems for them. Pragya returns to Abhi. She asks him what is he hiding under the pillow. He doesn’t show his sketch. She asks him to show the drawing. She finds it really nice. He tells that he likes sun. He wants to climb up to the sun. She smiles hearing his innocent kiddish talk. He tells that he wants to go out and enjoy. She tells that she can take him out.

He tells that Aaliya will not permit and beat him. She asks him not to feel scared, she will take him for outing once he wears good clothes. She asks him not to tear his new clothes. Mitali tries to spy on them. Abhi agrees to change his clothes. Mitali watches them to see who is Gayatri. Abhi asks Pragya to show her face. He wants to know who she is. Pragya refuses, but Abhi demands her to show her face. Abhi gets to see Pragya’s face. Will he remember Pragya? Comment your view and keep reading.

Reviewed Rating for Kumkum Bhagya Abhi painful cry 11th March 2021 Written Update: 3/5 This rating is solely based on the opinion of the writer. You may post your own take on the show in the comment section below.