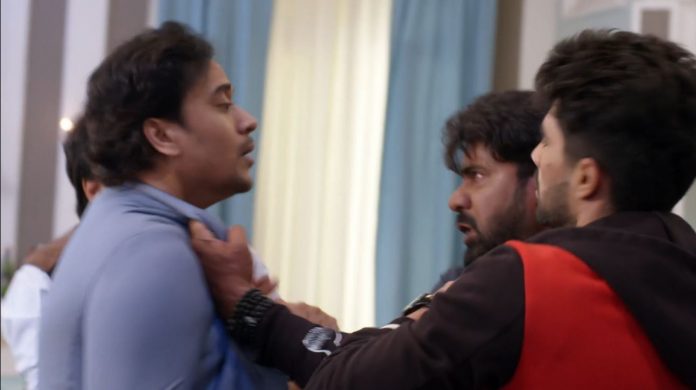 Kumkum Bhagya Abhi insane act 12th March 2021 Full Update Abhi asks Pragya to show her face. He wants to know if she is also scary like Mitali. Pragya doesn’t want any shock to Abhi. She knows that he will not remember her, but still doesn’t want him to experience any bad or pleasant shock. She doesn’t want to get upset, else he will break their friendship. Abhi tells her that he will see her face any how. He forces her to show her face.

Mitali gets worried for Gayatri and runs to call Aaliya. Abhi sees Pragya’s face. He connects with her. He gets super happy to see her. She wonders if he remembers her. He tells her that she is his Fuggi. Pragya gets hopeful of his quick recovery. He tell that she is just like his doll, its close to his heart. He keeps the doll safe. She knows that he has kept the doll safe even when he doesn’t remember them. She expects him to preserve their memories as well. He takes the doll from her. Mitali asks Aaliya to stop Abhi, he can’t see Gayatri’s face.

Aaliya tells that the clients are more important than Abhi at this time. She asks Mitali to not come with small problems. She wants Mitali to solve it herself. Tanu and Mitali get into an argument. Mitali informs her about Abhi, who is forcing Gayatri to show her face. Mitali feels she did a mistake to leave her house and come here to stay.

Even Tanu feels a mistake that she left her husband for Abhi’s sake. She thinks she had done a mistake. She plans to go back to her husband by making his accident’s excuse. Prachi is much hurt because of Rhea’s words. Shahana asks her to marry Ranbir and end Rhea’s chapter for once and all. Prachi refuses. Shahana asks her to show the anger to Rhea. Prachi can’t tell her that Pragya has gone to Abhi’s house. She wants to tolerate anything for Pragya’s happiness. She feels her mother’s happiness is most important to her.

Meanwhile, Tanu informs Baljeet about Rhea and Ranbir’s engagement. Baljeet reprimands them for ignoring Abhi’s condition. Aaliya tells that Abhi may never recover, they can’t go mad like him or stop living their lives. She tells that Rhea and Ranbir’s marriage would have happened long time back if Abhi was okay. Tanu understands her point. Aaliya asks Raj to handle things at office and family too. They argue over their responsibilities.

They stop their arguments when Vikram and Pallavi come. Vikram asks for Abhi. Aaliya tells that Abhi isn’t mentally stable, he can’t dine with them. Vikram goes to call Ranbir. Aaliya calls for Rhea. Abhi and Pragya share a friendly moment while she decides his new clothes. She wants to change so that they can go for an outing. He tells that she is just like his doll, but little different. He asks her to wear glasses if she wants to look the same like his doll. She knows that Abhi used to like her glasses. Tanu asks Pallavi about Ranbir’s wish.

She wants to know if Ranbir will marry Rhea. Pallavi has worried that Ranbir has refused for the marriage. She asks the reason that he refused when he agreed before. Pallavi tells that Ranbir is worried to commit to a relation. Aaliya knows that Pallavi is lying, but she will convince him for sure. Pallavi lies that Ranbir likes Rhea. Aaliya and Rhea know well that Ranbir loves Prachi. Rhea looks upset. Aaliya goes to check on her. Baljeet finds all of them crazy.

Pragya tells Abhi that he still knows to make stories. She asks him to change his clothes in the washroom, he is not a kid to change before anyone. She tells that he should behave like a grown up now. Abhi listens to her. Mitali checks if she is fine, if Abhi had hurt her. She passes Abhi’s food. Pragya wants Abhi to dress up soon and join the family lunch. Mitali tells that she can’t help Abhi in this matter. Abhi wants Pragya to be with him every day to make his life easy. She takes Abhi for the family lunch. Abhi gets violent and attacks Raj.

Aaliya beats up Abhi to control him. Pragya reprimands the family to behave kind and loving like family should be. She can’t see Abhi getting hurt. She stops Aaliya from beating him and snatches the stick. Pragya takes a stand for Abhi, which leaves everyone surprised. Ranbir suspects Pragya and asks her the truth. He threatens to tell everything about her if she hides anything. Will Pragya confide this time and get Ranbir’s support to cure Abhi? Keep reading.

Reviewed Rating for Kumkum Bhagya Abhi insane act 12th March 2021 Full Update: 4/5 This rating is solely based on the opinion of the writer. You may post your own take on the show in the comment section below.