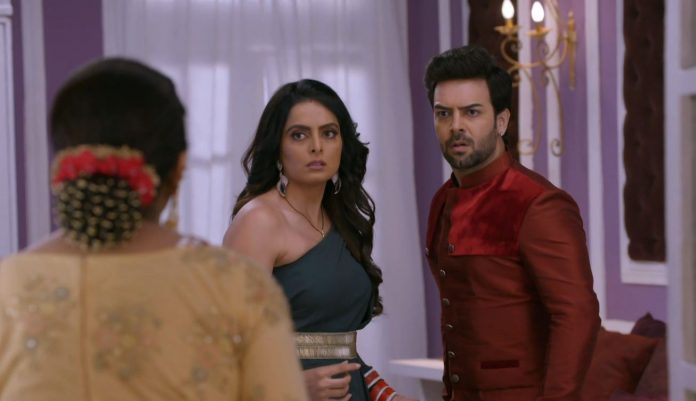 Kundali Bhagya Prithvi Sherlyn caught 11th March 2021 Written Update Sanjana wants to know what’s going on between Prithvi and Sherlyn. She is troubled by Mahira. Preeta gets angry seeing Karan performing with Mahira. Bani tells Parminder that Suresh and Rishabh had gone to meet Mahesh. Karan gets Preeta back on the dance floor and performs with her. Mahira controls her anger. Preeta teases Karan about Mahira. Karan tells her that he is enjoying seeing his jealous wife. She is glad that he is conscious about his wife.

Prithvi can’t see Preeta happy with Karan. Kritika finds Prithvi getting affected by them. Preeta stops Karan from romancing in front of everyone. Kareena wants Preeta to focus on Kritika’s functions and not get under limelight herself. Kritika asks why is Prithvi upset. He tells that Karan and Preeta are dancing close, its looking so cheap, it doesn’t suit their class. He tells her that Preeta is embarrassing them in front of the guests. He feels Mahira is a loser, that she couldn’t make Karan away from Preeta.

Mahira fakes an injury to get Karan’s attention. She tells Karan that her foot got twisted. Kareena asks Karan to take Mahira to her room. Karan attends Mahira. His care gives hopes to Mahira. Parminder asks Bani about Karan and Mahira’s broken relation. Bani tells that its a long story. Sameer and Shrishti get away with the evidence, that can stop his wedding. They flee from the window. Guard checks the bedroom.

He realizes that Sameer had taken some evidence against Prithvi. Kritika asks Prithvi to be happy. Suresh is grateful to Prithvi for coming as their good luck, that Mahesh is gaining consciousness since Prithvi’s arrival. This news isn’t good for Prithvi. Rishabh doesn’t believe that Prithvi is a nice man. He wants Kritika to come with him for a talk. She doesn’t leave Prithvi’s hand. She wants Rishabh to talk in front of Prithvi. Rishabh apologizes to her for hitting Prithvi. Prithvi tells that he has forgiven Rishabh.

He wants Kritika to be happy. Rishabh warns him to keep her happy. Sameer and Shrishti happily walk into the house with the evidence. Prithvi finds their smiling faces, which causes tension. He doubts that she has plotted against him. He knows that Shrishti can’t be happy for his engagement. Rishabh cheers up Kritika. Preeta takes care of Mahira’s injury. Mahira asks Kareena to carry on with the function. She worries that Preeta will know that she is faking the injury. Karan helps out Mahira.

After he leaves, Mahira tells Preeta that she can’t see Karan and her close, she had to react in this way to make them away. Preeta feels Mahira is still disgusting. Mahira admits that she still wants Karan. She gets on her feet. She tells that she isn’t hurt, Karan is caring for her, they have become friends. Karan finds Mahira on her feet. Mahira tells that Preeta had cured her sprain. Karan still cares for her as a friend. Preeta gets angered. She wants to tell Karan that Mahira is still the same.

Karan tells that Preeta knows him well, she won’t be jealous by their friendship. Prithvi meets Shrishti to know her plans. She tells that she wasn’t talking about him. He asks her to reveal what is she up to. She tells him that she is enjoying the game, she will dig up his grave and push him into it. She warns him. Prithvi worries that she had got a solid evidence against him. He can’t follow Shrishti to know her plan. He thinks to take Sherlyn’s help. He meets Sherlyn. He tells her that he can’t leave the engagement, but she has to follow Shrishti to get the evidence from her. He asks Sherlyn not to let Shrishti succeed in her plans.

Sherlyn gets busy with Rishabh. He asks Sherlyn to answer Parminder, tell her the story of their marriage. Parminder asks them about their love story, their marriage and union. Sherlyn tells Parminder that it was an arranged marriage, she met Rishabh and liked him. Parminder gets her answers. Prithvi and Sherlyn keep an eye on Shrishti. Rishabh asks Sherlyn to take some rest. She asks him not to fake care. Sherlyn rushes after Shrishti. Kareena and Rakhi stop Sherlyn to know if she is fine. Sherlyn looks for Shrishti.

Kareena tells them that Mahira is doing fine now. Prithvi tells Kritika that he is nervous for their engagement. He excuses himself. He can’t let his truth come out. Kritika wants Prithvi to be comfortable with her family. Shrishti shares the proof with Preeta. She adds that Kareena will know the truth soon, that Prithvi has come to Luthra house with a motive. Kareena catches Prithvi and Sherlyn sharing a cozy hug. She is shell shocked and demands an answer from both of them. She asks them what are they doing together. What excuse will Prithvi and Sherlyn make this time to fool Kareena? Do you think they will really get caught? Comment below and keep reading.

Reviewed Rating for Kundali Bhagya Prithvi Sherlyn caught 11th March 2021 Update: 4/5 This rating is solely based on the opinion of the writer. You may post your own take on the show in the comment section below.