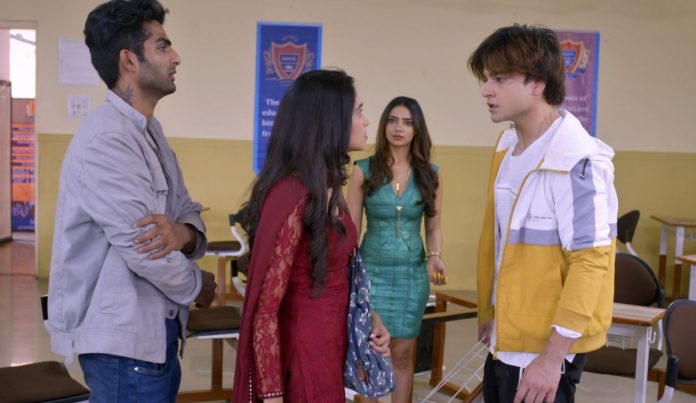 Kumkum Bhagya Prachi huge drama 17th March 2021 Full Update Abhi bonds with Baljeet. He shows his drawings. She compliments his drawing skills. Abhi tells that he had made the drawing of his doll. He wants to make his doll. He tells that the doll looks like Gayatri. Baljeet tells that Gayatri is sweet. Abhi tells that he wants to have a pet name for Gayatri also. Baljeet asks him to name the doll Fuggi. Abhi likes the name. Pragya misses him and talks to his picture.

Baljeet asks Abhi to sleep. Pragya tells that she would have been with Abhi if it was possible. Baljeet caresses Abhi. He asks her not to touch his hair. She apologizes to him. He tells that he will not beat her. He waits for the morning. Baljeet tells that the morning will come after sunrise. He tells that he will wait for the sunrise. He doesn’t tell the reason. She understands that he is waiting for Gayatri. She asks him to sleep. He names Gayatri as Gayu. Baljeet asks him to close eyes and see Gayu. He doesn’t visualize her. He goes to sleep.

Pragya wants to live with Abhi. She cries for Abhi. Abhi wakes up and gets a panic attack again. Baljeet asks him to sleep, so that the marriage happens soon. Ranbir gets into a fight with a guy, who defames Prachi. He can’t hear a word against Prachi. Rhea asks Ranbir to stop it. The girls think Ranbir will get rusticated. Prachi learns about the college fight. Palak takes Prachi to show Ranbir’s fight. Prachi gets to see Ranbir’s madness.

Ranbir tells the guy that he will ruin his life if he dares to ruin Prachi’s image. Ranbir is warned by his professor to stop the fight. Ranbir apologizes that he can’t take up the orders. Prachi stops Ranbir from breaking limits. Rhea and the guy had made this plan to insult Prachi in front of the entire college. Rhea likes Ranbir and Prachi’s argument. Ranbir reveals about the MMS to Prachi. He tells that the guy had tried to defame her. Prachi knows that Rhea could be behind it. She doesn’t react. She ruins the image herself.

She tells Ranbir that the MMS is real, she was really with that guy. Ranbir gets heartbroken. Abhi messes up the house. Mitali and Tanu try to control him. Aaliya reaches there and learns that Abhi is troubling again. She goes to bash him again. She lies that she will not beat him. Pragya reaches in time to save Abhi. Abhi grows upset that Gayatri cheated and came too late. He loses his cool. He tells that Aaliya was beating him.

Pragya isn’t scared of him. Pragya tells that she didn’t cheat him. She calms him down. She asks Aaliya not to mishandle Abhi. Prachi tells Ranbir that he shouldn’t interfere in Parth and her matter. Ranbir is misled. Rhea and Parth are shocked that Prachi didn’t react on their insulting move. Rhea feels Prachi has done the right thing to help them. She wanted Prachi to fall in Ranbir’s eyes. Prachi sacrifices her love for Pragya’s sake.