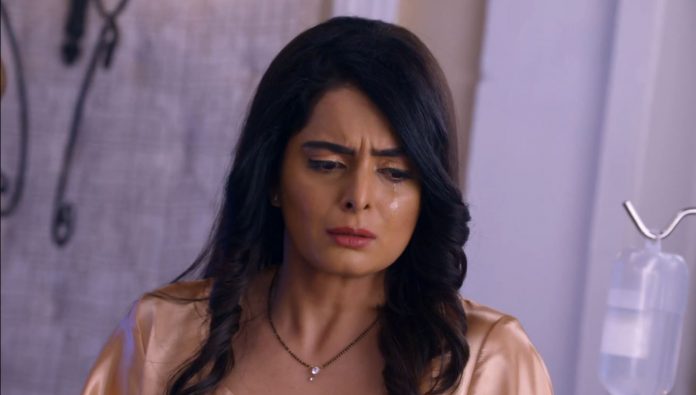 Kundali Bhagya 24th March 2021 Written Update Sherlyn in tears Kritika gets worried that someone had come to check the message in her room. Prithvi leaves from the room. He wants to find out what’s happening. Rakhi can’t take the truth striking her heart. She loves her Bahu. She tells Parminder that Sherlyn is like Mahesh’s daughter. Parminder tells Suresh that she has heard Sherlyn bidding bye to Mahesh forever. She adds that Sherlyn was injecting something to Mahesh. Rakhi wants Sherlyn to answer. She asks Sherlyn if she wanted Mahesh to die. Sherlyn tells Rakhi that she was telling Mahesh not to die.

She adds that she takes care of Mahesh’s medicines and injections. She asks Rakhi to think if she will do such a thing. Sherlyn acts innocent. She tries to trap Rakhi in her words. Parminder tells that she had heard it herself, Sherlyn is evil. Suresh asks Parminder not to say any nonsense. Sherlyn thanks Suresh. Suresh apologizes to Sherlyn. Rakhi cries for Mahesh, while Suresh tries to investigate the matter. Preeta gets worried for Bani, who falls down in her room. Preeta takes care of Bani. Mahira had planned to put Bani into trouble just to keep Preeta engaged. She wants to spend time with Karan. She tells that its her first day of the challenge.

Prithvi goes to meet Akshay at the hotel. He slaps Akshay. He reprimands Akshay for blackmailing Kritika. Akshay asks Prithvi to listen to him once, he was in need of money, he will not do anything if he tells. Prithvi asks him how much money did he ask for. Akshay tells that he demanded 20 lakhs. Prithvi splashes water on her. He tells Akshay that he should have great thinking, if he wants to become a creep, even then he has to become the number one creep. He decides to give 30 lakhs to Akshay if he does his work.

He asks Akshay to continue blackmailing Kritika. He tells that Kritika’s respect should be targeted now. He asks Akshay to leak Kritika’s pictures online to break her down. Mahira finds a chance to spend time with Karan. He assumes her to be Preeta and hugs her. He tells that he is looking for Preeta. She tells that Preeta was with Prithvi some time back. She asks him not to think anything wrong. He tells her that he trusts Preeta, she can meet anyone at anytime. He adds that Prithvi isn’t a nice guy. Preeta meets them.

She informs them about Bani’s injury. Karan tells her that she has to come along. Preeta tells that she has to walk alongside him. Mahira wants to see how long he trusts her. She knows that she can break the trust between them. Karan is thankful to Preeta that she attends his family members well. He asks Preeta to spare some time for him, they will go on a date. Preeta is happy that their relation is progressing. She tells him that she will think and tell him. He asks her to think well.

Prithvi asks Akshay if he can dare to scare Kritika to the level that she comes to take his help. He wants to become hero in Kritika’s life. He wants Akshat to just do his work. Akshay takes up the task. Prithvi asks him to finish his work well. He makes a leave. Suresh takes help from Sonu and wants him to find out about the injection drug. He wants to protect Mahesh’s life. He wants to get to the roots of the problem. Prithvi informs Sherlyn that he has met Akshay and hired him.

In the flashback scene, Sherlyn asks Prithvi about Kritika’s problem. Prithvi tells Sherlyn about Akshay’s blackmailing move. She asks him how is he blackmailing Kritika. Prithvi tells that Akshay has Kritika’s compromising pictures. He wants to teach a lesson to Akshay, but Sherlyn advises him to take an advantage of this situation. She tells that he should become a hero for Kritika again by using Akshay. She tells him that Kritika will come to take his help. She asks him to help Akshay and hire him to terrify Kritika. Prithvi tells her that he has hired Kritika, now he will not leave Kritika in peace. Sherlyn and Prithvi’s moment gets seen by Parminder. Comment your views on Sherlyn’s chapter closure. Keep reading,

Reviewed Rating for Kundali Bhagya 24th March 2021 Written Update Sherlyn loud cry: 2/5 This rating is solely based on the opinion of the writer. You may post your own take on the show in the comment section below.