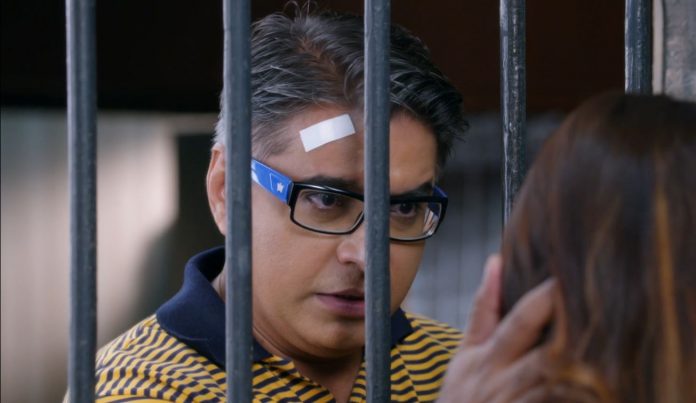 Kundali Bhagya Mahesh terrific vow Update 22nd April 2021 Prithvi demands the jewellery from Sherlyn to get help. She tells him that she has to give the jewellery to Parminder, who is blackmailing her after knowing their affair. He asks how dare Parminder blackmail them. He adds that someone is blackmailing him as well about Akshay’s murder. He tells that the blackmailer demanded 50 lakhs, else he will be revealing the truth to the police. He tells her that blackmailer knows about his meeting with Akshay.

He feels the blackmailer is Akshay’s murderer. She is relieved that he didn’t kill Akshay. He tells her that he didn’t kill Akshay, he has to give the money to the blackmailer and find out who is he. He wants to teach a lesson to the blackmailer. He tells his plans to impress Luthras by catching Akshay’s murderer. He wants to save the innocent Preeta from the law. Sherlyn reprimands him the moment she hears him chanting Preeta’s name. He asks her to help him by arranging money. She tells him that she doesn’t have 50 lakhs.

He asks her if Rishabh isn’t sending money to her. She asks him not to ask Mahira about money, maybe Mahira is the murderer. She warns him to stay alert from Mahira. She suggests him to enter Mahesh’s room and steal the jewellery to get 50 lakhs easily. Prithvi loves her idea. He tells her that he will steal the jewellery, but in Mahesh’s absence. She tells him that Mahesh would be sleeping after taking medicines. He pities the Luthras and feels sad for their loss.

Preeta misses Karan to the core. She has memories of the sweet times with Karan. Preeta wants Karan to know that she didn’t kill Akshay, she had taken a step in self defence. She wants Karan’s faith back on her. She deeply misses him. Prithvi doesn’t find Mahesh in his room. He cross checks if Mahesh is around. He gets lucky when Mahesh doesn’t appear anywhere. Prithvi goes to execute his plan. He tries to rob the jewellery. He struggles to find the locker keys. Sherlyn meets Prithvi to assist him in the robbery. He tells her that they should leave soon.

She tells that she didn’t give the necklace to Parminder. He asks her to bribe Parminder and save their affair secret. Meanwhile, Mahesh tries to meet his friend ACP Vijay. He learns about Vijay’s transfer. ACP Deepak takes Preeta’s case. Mahesh congratulates Deepak for his promotion. Deepak tells him that he is ready to help him. Mahesh wanted to meet his friend and seek help, but asks Deepak for help in Preeta’s case. He tells that Preeta can’t murder anyone, she is innocent. He asks Deepak to give bail to Preeta. He guarantees to bring Preeta to the court on time.

Deepak tells him that Preeta’s crime is proved by the evidences, the court shall decide about her charges. Mahesh wants to meet Preeta once. Deepak permits him to meet Preeta. Mahesh tells that Preeta is like his daughter, she is a gem at heart, very kind and caring. Deepak thinks of studying Akshay’s murder case again. Prithvi unlocks the safe using his robbing skills. He impresses Sherlyn. He steals the ancestral jewellery from the locker. She wants to find out who has killed Akshay. Moreover, Sarla meets the Luthras. She gets insulted by Kareena once again. Kareena protects her daughter Kritika and doesn’t care for Sarla.

Elsewhere, Sameer and Shrishti try to find out Mahira’s secret. They get information about Mahira’s meeting with the blackmailer. Kareena commands Sarla to leave from their house. Sarla is left in tears. Kritika feels sad for Sarla. Shrishti tells Sameer that they shall reach the place before Mahira. Consequently, Mahesh meets Preeta and assures her freedom from the mess. He tells her that he will protect his daughter from the wrong allegations. Preeta gets a big relief with this. What do you think, who is Akshay’s murderer if he is really killed? Comment your views and keep reading.

Reviewed Rating for Kundali Bhagya Mahesh terrific vow Update 22nd April 2021: 5/5 This rating is solely based on the opinion of the writer. You may post your own take on the show in the comment section below.