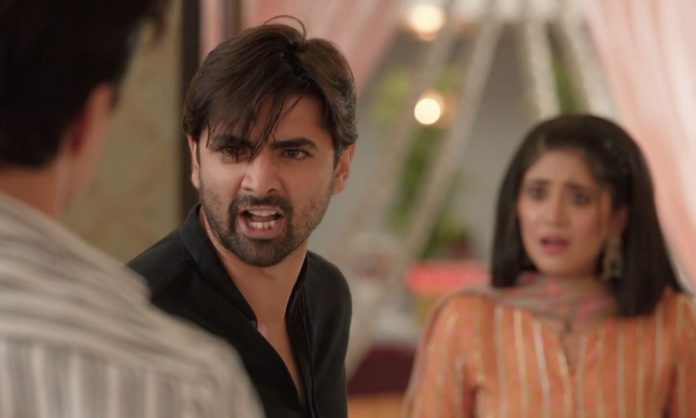 Yeh Rishta Naksh violent burst Upcoming 26th April 2021 Naksh returns in Goenka family with an aim to confront Kartik. He learns that Kartik is moving ahead in his life with someone else, by forgetting Naira completely. He can’t believe that Kartik can forget Naira in a year’s time and decide to remarry. Naksh confronts Kartik for deciding to marry Sirat, who is just Naira’s look alike. He asks Kartik how can he forget Naira and give her place to someone else. Naksh vents anger on Kartik, who tries hard to calm him down. Kartik fails to explain Naksh that his decision is just for the welfare and happiness of his children.

He is just making a deal with Sirat in order to get saved from marriage with a wrong person. Kartik also wants to help Sirat in pursuing her dreams. Naksh meets Sirat, who revives his memories of Naira for an instant, but he very well knows that she isn’t Naira. He tells Kartik that everyone who knew Naira as a person and loved her can never fall into the illusion that Sirat could be Naira. He tells the family that they are just pretending to accept Sirat as Naira, knowing that she is a different person.

Goenkas struggle to explain Naksh that the decision is taken for everyone’s betterment. Kairav interrupts in the elders’ talk to defend Kartik and Sirat’s marriage. The family had expected Naksh to melt down his heart after seeing Sirat, who resembles Naira. Naksh has a belief that Kartik isn’t worth Naira’s love and was never worth it.

He develops hatred for Kartik. Naksh expresses his feelings towards Kartik’s worst decision. He tells them that though Sirat resembles Naira’s face, she can’t become Naira and have the same emotions like Naira. He reprimands Kartik for believing Sirat as Naira, and getting her in the family. Kartik and Sirat explain him that she will never take Naira’s place, she will never try to end Naira’s memories in the family’s heart. Naksh accuses her for coming in their lives to take Naira’s place. He accuses Kartik for faking love for Naira when she was alive. Naksh tells him that Kaira is over with Naira’s death. Kartik tries hard to stop Naksh and explain him that Naira is still in his heart, he will love her till the end of his life.

Full Update: Kartik justifies his decision of marrying Sirat to Naksh. He tells Naksh that he wasn’t living after Naira left them, same was the case with Kairav, who was really dying without his mother. He tells Naksh that he is marrying Sirat just for Kairav’s life, Sirat is the one who gave him a new life by taking Naira’s place. He expresses his helplessness that he had agreed to marry Sirat for the sake of Kairav’s wish.

He can’t show up his sorrow to his kids, who are too young to understand. He tells Naksh that he is marrying just to get a mother for his kids, he has no feelings for Sirat and can never have. He wants Naksh to understand that though he had failed in many relations, he wants to pass as a good father. Naksh continues to throw out his anger and condemns Kartik’s marriage. Kartik cries his heart out to Kirti, once Naksh leaves in rage. Kartik asks Kirti to explain Naksh that he is too helpless to step back at this time, he has to move on for the sake of Kairav and Akshara, he can’t break his promise given to Naira.

Moreover, Kirti pacifies Kartik who is just doing the right thing for his kids. She finds him a strong person unlike Naksh. Kartik tells that he is also finding hard to keep smiling in front of the family by hiding the wave of sorrow tiding inside his heart all the time. Kirti feels sorry for both Kartik and Naksh, who still miss Naira so much.

Later, Kartik pacifies Sirat who is hurt by Naksh’s behavior. He finds her understanding Naksh’s anger, which is just his love for Naira. She tells Kartik that Naira was a lucky person to get love from every relation. Kartik is grateful that she isn’t blaming Naksh. He tells her that she should focus on her life and not think of anyone’s opinion regarding her life and marriage. He encourages her to stay happy, just the way he is trying. Sirat realizes the pain he is hiding. She knows that Naksh had triggered Kartik’s pain once again. She wishes she could help.

Furthermore, Rhea asks Manish to break Kartik and Sirat’s alliance, but doesn’t get his support. He tells her that he has tried enough and left it to fate now. He finds Sirat taking good care of Kairav and also bringing Kartik’s life on track. He thinks to accept the change taking place in their lives. Rhea is frustrated that Manish isn’t helping her either. Kartik and Sirat get together because of the kids.

They decide to visit a hotel for their respective work, unaware that Ranvir is also at that hotel searching for Sirat. Ranvir gets frustrated and hurts someone in anger, thinking the guy is Sirat’s boyfriend. Ranvir realizes his mistake and makes an apology. He instead hurts himself. Ranvir wishes to meet her once. He comes across Kartik, who will be bringing him face to face with Sirat. Keep reading to know about Ranvir and Sirat’s confrontation scene.

Reviewed Rating for Yeh Rishta Naksh violent burst Upcoming 26th April 2021 5/5 This rating is solely based on the opinion of the writer. You may post your own take on the show in the comment section below.