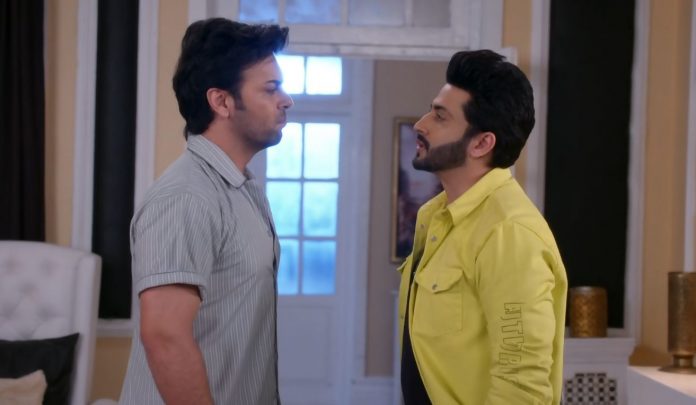 Kundali Bhagya Karan Prithvi team Full Update 30th April Sameer and Shrishti try to catch Prithvi and throw hot water at him, but Prithvi gets saved. Prithvi escapes from the factory in no time, but leaves his shoe behind when his foot gets stuck. Shrishti tells that the blackmailer has run away. Rakhi tells that Preeta would be glad to get Kareena’s support. She asks Kritika not to worry. She tells that the court hearing will go smooth, they will support Preeta and bring her home. Parminder asks Kareena why is she worried.

Kareena tells that she knows it already, she had warned the family before as well, but Preeta controlled all of them by acting helpless. Parminder gives a wrong direction to Kareena’s thinking. Sameer gets Prithvi’s shoe. He tells Shrishti that the blackmailer left a clue behind. He knows that it belongs to Prithvi. He tells that he knows it well, he is very sure, Prithvi was cheating him. Guard tells them that two men have escaped from the factory.

Shrishti thinks one of the blackmailer and the other was the killer. Guard tells that the blackmailer was wearing a black colour hoodie. She thanks him for the information. Sameer doesn’t understand what was Prithvi upto. Shrishti gets a bracelet. She wants to find out to whom it belongs. Lawyer tells Mahesh that Preeta has confessed her meeting with Akshay, her statement would go against her. He explains that her statement had made the case weak.

Karan tells that Preeta has told the truth. Mahesh wants the lawyer to defend Preeta as his own daughter. Mahesh assures Karan that everything will get fine. Mahira finds Prithvi back and questions him to know what is he hiding. He wants her to leave. She asks him to remember that he helped her. She reveals that she regrets helping him, Shubham is still blackmailing her, she had to pay him again. Prithvi feels sorry.

Sherlyn asks him if he has seen the blackmailer’s face. He tells how he failed in his motive because of Sameer and Shrishti, who were really attacking him today. Shrishti comes home to confront Prithvi. She sees Mahira and confronts her as well. She asks Mahira if she had framed Preeta. She knows that someone was blackmailing Mahira. Mahira warns her. Shrishti knows that Mahira can’t do anything. Parminder meets Mahira and gets a rude reply. She informs Shrishti that Prithvi has the same phone as Mahira.

Shrishti realizes that the message from the blackmailer was for Prithvi. Sameer tells that they will prove Prithvi’s crime. She asks him to get the shoe, they will meet Karan first and ask him to confront Prithvi. Prithvi feels he made a mistake by leaving his shoe. He thinks of having a backup. Sooner, Karan confronts him by showing the shoe he left. He asks Prithvi if its his shoe. Prithvi lies to him. Sameer and Shrishti question him about his presence at the factory. Karan wants an answer from him. Shrishti tells that she had read the blackmailer’s message on Prithvi’s phone.

Prithvi tells Karan that he didn’t kill Akshay, he can never frame Preeta in a police case, he wishes just good for her, because he loves her. He tells Karan that he is working hard to prove Preeta innocent. Karan believes Prithvi knowing his madness for Preeta. Later, Shrishti, Sameer and Karan confront Ruchika as well, when Shrishti shows Ruchika’s bracelet found at the spot. Karan asks Ruchika to speak up the truth before he passes the evidence to the police. Ruchika gets worried. Is Ruchika the killer? Comment your views. Keep reading.

Reviewed Rating for Kundali Bhagya Karan Prithvi team Full Update 30th April 3/5 This rating is solely based on the opinion of the writer. You may post your own take on the show in the comment section below.