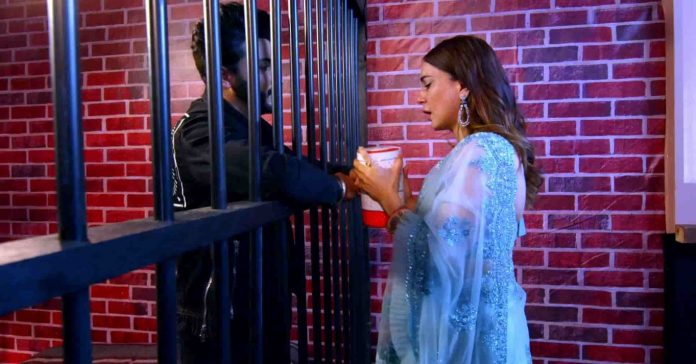 Kundali Bhagya Preeta next move 13th May 2021 Full Written Update Preeta decides to visit Karan in the jail. She finally meets Karan and tries to talk to him about his bail. She promises to make things better for him. She tries to pacify his emotional conflict. She tells him that he should have not take the blame on himself. Karan is tired explaining her that she means a lot to him, he has taken the blame to protect her from the punishment.

He tells her that even if she was in the jail, it would be equally painful for him. They land up in a sweet argument, which makes them realize their normalcy. They get calm and admire each other. Prithvi reaches there by following Preeta. He finds her with Karan. He gets much upset to see them sharing a cute moment. He thinks Preeta is making a big mistake. Preeta promises Karan that she will prove him innocent by finding out the truth behind Akshay’s murder. She wants to bring out the real culprit in front of everyone.

She tells Karan that very soon, she will take him home by clearing his name. She gets food for him which she made with much love. She knows that Karan is missing homemade food. After Preeta leaves, Prithvi also leaves without speaking to Karan. Preeta finds Rakhi tensed. Rakhi tells everyone that she has gone to meet Karan. Pammi keeps an eye on Preeta like an enemy.

Suresh gets bothered by Pammi’s strange behavior. He had already warned her not to get involved in Karan and Preeta’s matter, but she has turned deaf ears. Rakhi tells the family that Karan was just listening to her, he didn’t say anything. She adds that Mahesh has visited Karan in morning. She feels Karan’s behavior has changed a lot, he isn’t impulsive like before, he has learnt to handle the situation maturely.

She tells the family that they should behave normal and pretend to be happy in front of Mahesh so that Mahesh’s condition doesn’t get back to the precious state. She wants Mahesh to improve his health. Preeta knows the kind of struggle Rakhi is undergoing while balancing Karan and Mahesh’s problems at the same time. She promises Rakhi that she will try her best and bring Karan home as soon as possible.

She tells that Mahesh’s birthday celebrations are close, Karan would be attending it, Karan would be with his family and celebrating. She gives much hope to Rakhi. She goes to meet Karan once again and updates about the family. She tries to make him feel better. He asks her if she missed him at home. She gets upset with him. Their banter goes on. She admits that she missed him a lot, and even the family is missing him.

On the other side, Prithvi gets threatened by Megha, who keeps calling him. Megha wants a huge amount from him. She further blackmails him. Kritika asks Prithvi to answer the call. Prithvi doesn’t want to take the risk. He thinks Megha can expose his truth to Kritika, which he can’t afford. How will Preeta prove Karan innocent? The track has again shifted on a slow pace. What do you expect from the show? Comment your views and keep reading.

Reviewed Rating for Kundali Bhagya Preeta next move 13th May 2021 Full Update4/5 This rating is solely based on the opinion of the writer. You may post your own take on the show in the comment section below.