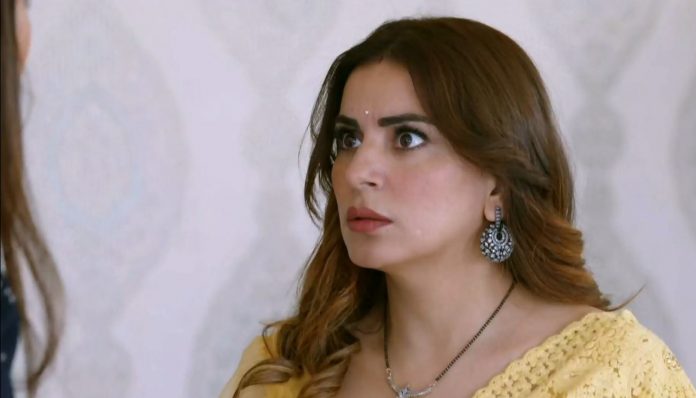 Kundali Bhagya 31st May 2021 Written Update Countdown begins Sherlyn rejoices that Mahira can never ever guess that she is Akshay’s real killer. She tells Prithvi that Mahira has no idea about her crime, she can just suspect Ruchika or Megha, but the real killer is in front of her in the house. Prithvi is also happy with the way Sherlyn has framed Mahira. He tells that Preeta can’t guess their truth. Preeta keeps Akshay’s phone safe.

She tells that they have the proof against the killer. She suspects that its Mahira. Mahira doesn’t want Karan to torture himself in the jail cell. Karan is content to be in the jail instead Preeta, since she is his love. He misses Preeta. He wants her to come soon and meet her. He values Preeta’s love. He doesn’t think anyone like Mahira can understand his love for Preeta. Mahira wants to tell him that she also loves him, but she had tried all the unfair means to get him. Karan loves Preeta who is always true and doting. He remembers his promise to Preeta.

He feels proud that he had kept his word. He has no regrets that he got jailed while attempting to save her. He cherishes the memories of Preeta. Preeta too misses Karan deeply. She wishes he comes back home. Sherlyn gets Pammi on her side. She wants Pammi to oppose Rakhi and show Preeta’s truth to the Luthras. Sherlyn acts sweet to win Pammi’s trust. Prithvi knows that Sherlyn is preparing her next plan. Pammi accuses Preeta for losing the phone which had an evidence against the killer.

Consequently, Pammi and Rakhi get into a heated argument. Rakhi defends her bahu Preeta. Pammi wants to know if Preeta is responsible for all the wrong happenings in the house. Preeta doesn’t want any blames on herself, when she is trying hard to rescue Karan. She makes a sweet apology to Pammi. Pammi demands Akshay’s phone from her. She doesn’t realize that Sherlyn is fooling her. Rakhi tells that Preeta cares for Karan, she doesn’t need to prove it to anyone. Pammi asks Preeta to take responsibility of her in-laws.

Mahesh knows Preeta’s efforts and supports her. Pammi demands an answer from Preeta, but Rakhi comes on the fore. Rakhi doesn’t want Preeta to forget her roots, her first family. Pammi shouts that she worries for Karan the most. Preeta tells Pammi that she has lost the phone. She doesn’t want the enemies to know that she still has the phone. She lies to the family that she really lost the phone. Rakhi challenges Pammi that Preeta will bring Karan home and prove his innocence in Akshay’s murder case. She believes Preeta and her plans. She asks Pammi to wait and watch, how Preeta proves Karan innocent. Preeta gets encouraged to fulfill her duties and also meet Rakhi’s expectations. Keep reading.

She tells that she couldn’t save the phone from the enemies, but still she will find the evidences. She tells that someone has deliberately snatched the evidences from them. She doesn’t want the killer to get alert. Sameer’s friend meets him and asks for the phone to crack the password. Sameer doesn’t tell anything to his friend. He reveals that the phone is stolen. On the other hand, Mahira goes mad that Karan loves Preeta so much. She can’t accept Karan and Preeta’s great love story.

She knows that Preeta will do anything for Karan, since she turned rich and famous after marrying him. She wants to snatch everything from her. She gets raged that Karan isn’t accepting her love. She just loves Karan. She can’t see him with Preeta, even if he loves Preeta and married her. She doesn’t want to understand his situation. She swears to do anything to achieve his love. She is ready to cross any limits to get him. Rakhi tells Mahesh that they lost the phone, because the thief had stolen it from Preeta’s room.

Mahesh wants to file a police complaint. Kritika tells him that police will blame them for manipulating the evidences. She doesn’t want Preeta to fall into trouble. Pammi tells Kritika that Preeta should be questioned by the police. She gets angry on Preeta.

Prithvi feels that Preeta has become a servant for the Luthras, she didn’t get lucky after marrying Karan. He wishes that Preeta married him. Mahesh respects Pammi because of Suresh. He warns her against accusing Preeta. He tells that Preeta respects the elders, if she gave her any odd reply, then Pammi would lose respect.

Pammi tells that she has a reason to accuse Preeta. Mahesh tells Pammi that Preeta is hiding her anger, its not good to provoke someone by accusations. Rakhi also warns Pammi. She asks Pammi not to get scared of Preeta’s anger. She is confidence that Preeta will prove Karan’s innocence, and fix every wrong. Pammi doesn’t know if she was right to believe Sherlyn or not. She knows that Sherlyn has keyed her to fight with Preeta.

Reviewed Rating for Kundali Bhagya 31st May 2021 Written Update Countdown: 2/5 This rating is solely based on the opinion of the writer. You may post your own take on the show in the comment section below.