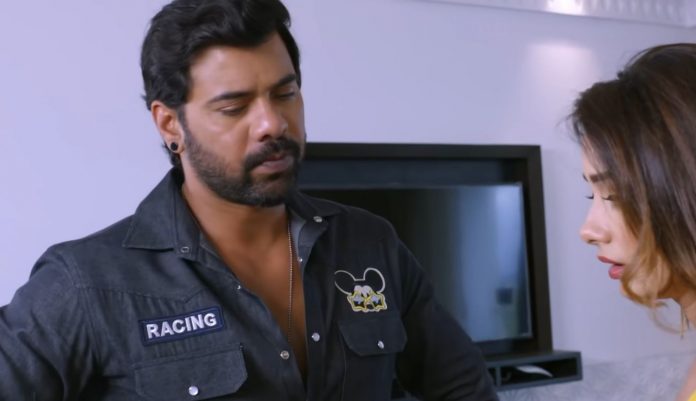 Kumkum Bhagya 1st June 2021 Written Update Abhi confronts Abhi goes to meet Tanu and know the reason for her arrival. Mitali fears that Tanu is going to come up with a big drama. Abhi meets Tanu and questions about her husband. Tanu tells that she has just regarded Abhi as her husband. She asks him not to anger her, else he will get jailed. He doesn’t care. He remembers Pragya’s words. Tanu tells that the current judge seeing their case is going to retire, a new judge will see their pending case. She wants to marry Abhi soon. She tells that she has decided to pull the date closer.

She advises that they keep two functions on the same day. Abhi tells that he will think about it and let her know. Tanu makes a leave. On the other side, Ranbir goes to Rhea’s washroom to take a shower, when he doesn’t get running taps in his washroom. He doesn’t want Rhea to misunderstand him. He leaves a note for Rhea.

Prachi reaches Rhea’s room to ask for her clothes for laundry. She goes to help Rhea when the soap falls out. She gets stunned on seeing Ranbir there. Ranbir asks her why did she come inside. Prachi tells that she had come to help Rhea. Mitali comes to meet Rhea. Ranbir locks the door. Mitali learns his note. She gives her message for Ranbir.

Pragya feels that Tanu hates her the most. She wants to know how did Tanu manage to hide Pradeep. Prachi feels scared of getting caught with Ranbir. They get into a moment under the shower. Ranbir makes Mitali go away. He tells Prachi that Mitali didn’t see her. Before Prachi makes a leave, Rhea reaches there. Prachi doesn’t want to give any wrong impression to Rhea. Ranbir tells that Rhea will understand that there is love between them. Rhea asks who’s inside the washroom. Prachi grows nervous.

Rhea shouts and asks them for the final time to speak up. Prachi asks Ranbir to handle it. Ranbir lies to Rhea to handle the matter. Aaliya advises Rhea to keep an eye on Ranbir and keep him away from Prachi. She tells that until Ranbir and Rhea get married, Prachi must be away. She alerts Rhea that Prachi can snatch her rights on Ranbir. Rhea grows extremely cautious.

Abhi informs Aaliya that Tanu is insisting him to marry soon. Aaliya asks him to refuse to Tanu, they can wait for the new judge’s verdict. Pragya tells that Tanu has the evidences, unlike them, they know the truth, but they lack any possible solution. She adds that the current judge understands their case and gave them a new hearing date, its a big chance for them, maybe the new judge won’t help them.

She admits that she is scared of Tanu. She feels that Abhi should agree to Tanu to take the plan ahead. She asks him to go to Tanu and accept her conditions. Abhi asks her why is she after his marriage. She tells him that she wants to get Tanu’s truth out. She sends him to Tanu. Abhi asks Tanu to stop the hide and seek, he knows her truth, but she should confess it to him. He confronts her. He asks her what is she hiding about her marriage. Tanu doesn’t realize that Abhi knows about Pradeep. She thinks she is free from Pradeep, who is dead. Did Pradeep really die? Keep reading. Comment your views.

Pragya asks Abhi to meet Tanu at her house and inform her about his decision to marry at the earlier date. She tells that he can also get a chance to look for any proof in Tanu’s house. Abhi doesn’t want to go alone, knowing Tanu can blame him of anything. Aaliya tells that she will go along with him to limit Tanu’s dirty mind.

On the other hand, Ranbir and Prachi get stressed when Rhea counts down to know who is inside. Rhea asks them to answer. Ranbir tells Rhea that he is inside, he had come for a shower and also left a note outside. Prachi finds Ranbir distracting Rhea and makes a leave from her room. Ranbir thankfully gets saved. Rhea is confused by his behavior. Mitali teases Rhea to be romancing Ranbir secretly. Furthermore, Abhi meets Tanu and lets her know his decision. She asks him to organize the mehendi and sangeet function on the same day. She tells that they will need to rush with the functions.

Abhi makes an excuse to enter her room. He goes to check for any proof. He gets a photo album, and thinks it would have Pradeep and Tanu’s wedding pictures. Tanu reaches him and finds him with the album, when he was about going to check it. She asks him to go ahead and check the album. He gets upset on finding Tanu and his pictures in it. She tells him that she loves him and kept all his memories stored. Abhi gets enough of her drama. He wants to ask about Pradeep directly.

Aryan and Shahana know that Ranbir and Prachi love each other. They talk about the couple, but Aaliya takes it the other way. Aaliya thinks Prachi is still trying on Ranbir. She doesn’t want Prachi to snatch Rhea’s love. Abhi and Aaliya meet Pragya to inform her that they have come back home empty-handed, they didn’t find any evidence in Tanu’s house. Pragya asks Abhi to leave it on fate. She tells that it will be better if they let Tanu think that she is ahead of them. She tells that they will catch Tanu when she makes a mistake in overconfidence.

Reviewed Rating for Kumkum Bhagya 1st June 2021 Written Update Abhi confronts: 4/5 This rating is solely based on the opinion of the writer. You may post your own take on the show in the comment section below.